Foreign journalists see Jerusalem with their own eyes

"Israel is seen through a prism of so many filters and lobby groups – be it Israeli, Christian or Muslim advocacy groups. So it’s hard to get a clear understanding of what’s going on here from afar."

Ze'ev Elkin, Jerusalem affairs minister (right), speaks to a group of European journalists during a recent tour of the City of David
(photo credit: Courtesy)
Advertisement
On a bright spring day, on a narrow street of Jerusalem’s Old City, French journalist Jeanne Dusseuil was captivated when she spotted the most ordinary sight in the most extraordinary city the world.While exploring east Jerusalem, Dusseuil saw a young boy, arms outstretched, almost as if in prayer, looking upward to the heavens. But instead of praying to God – as many do in this holy place – the boy was pleading for someone to fetch a stuffed toy tiger that got stuck on the roof of one of the homes.When Dusseuil and her Polish colleague, Bartosz Tomasz, the foreign editor of Gazeta Wyborcza, realized what caused the boy such agony, they quickly found a pole and nudged the toy off the roof, much to the boy’s delight.“He had the eyes of hope when he was looking at us trying to take it down,” she recalled. “This kid could have been Jewish, Christian or Muslim, but his hopes were universal. He was looking up, just hoping to get his beloved toy.”Despite the diplomatic, geopolitical and religious conflict that tends to overshadow Jerusalem, the notion that most people want to live in harmony with their neighbors and thrive is a key message the European Israel Press Association (EIPA) hopes its delegation of journalists understood during their recent trip to the city.This special EIPA press trip, organized in conjunction with the European Jewish Association, headed by Rabbi Menachem Margolin, and the Jerusalem Affairs Ministry, led by MK Ze’ev Elkin, aims to illustrate that Jerusalem is a bustling hub of diversity, culture and hi-tech and its present and future are just as fascinating to behold as its treasured past.“Jerusalem is not only a city of the past, but also a city with a vision for the future,” Elkin said in a statement.“In 2015, Jerusalem was ranked 37th in the list of the 50 most innovative cities in the world, and in 2017 it has already climbed to 27.“This year, believe it or not, with over 600 hi-tech companies, Jerusalem is on the verge of entering the list of the 20 most innovative cities in the world. This is a testimony to the tremendous efforts invested in innovation in Jerusalem,” he added.Elkin himself – who worked on a doctorate in Jewish studies – led the group’s tour at the City of David, where he discussed the numerous excavations found at the historical site.The delegation of European journalists also bore witness to other sites of innovation in Jerusalem by visiting the Hadassah Medical Center, the Innovation Lab at the Tower of David Museum and the Max Rayne Hand in Hand School, whose bilingual Arabic and Hebrew curriculum is the epitome of coexistence.At another stop, the group met with Paulo Dias, CEO of Southern Europe, Africa and Brazil for Regus.The delegation visited the international networking company’s new site in Jerusalem’s Har Hotzvim neighborhood.Dias led a tour throughout the sleek workspace where new companies set up shop until they become big enough to occupy their own office space. While the company has 3,000 locations in 120 countries, its Jerusalem site is a special one that is emblematic of the growing hi-tech scene here.“We look at every country for their specialties, but when we see the rapid pulse of activity here, we understand that there is a need to accelerate,” he said when explaining why the company decided to open a new location in Jerusalem.It is perhaps a side of Jerusalem that isn’t usually seen in the media – especially in Europe which is often at diplomatic loggerheads with the Jewish state.Therefore, “bringing a cohort of respected journalists to see Jerusalem for themselves is an essential step in bridging gaps between Europe and Israel,” emphasized Margolin. 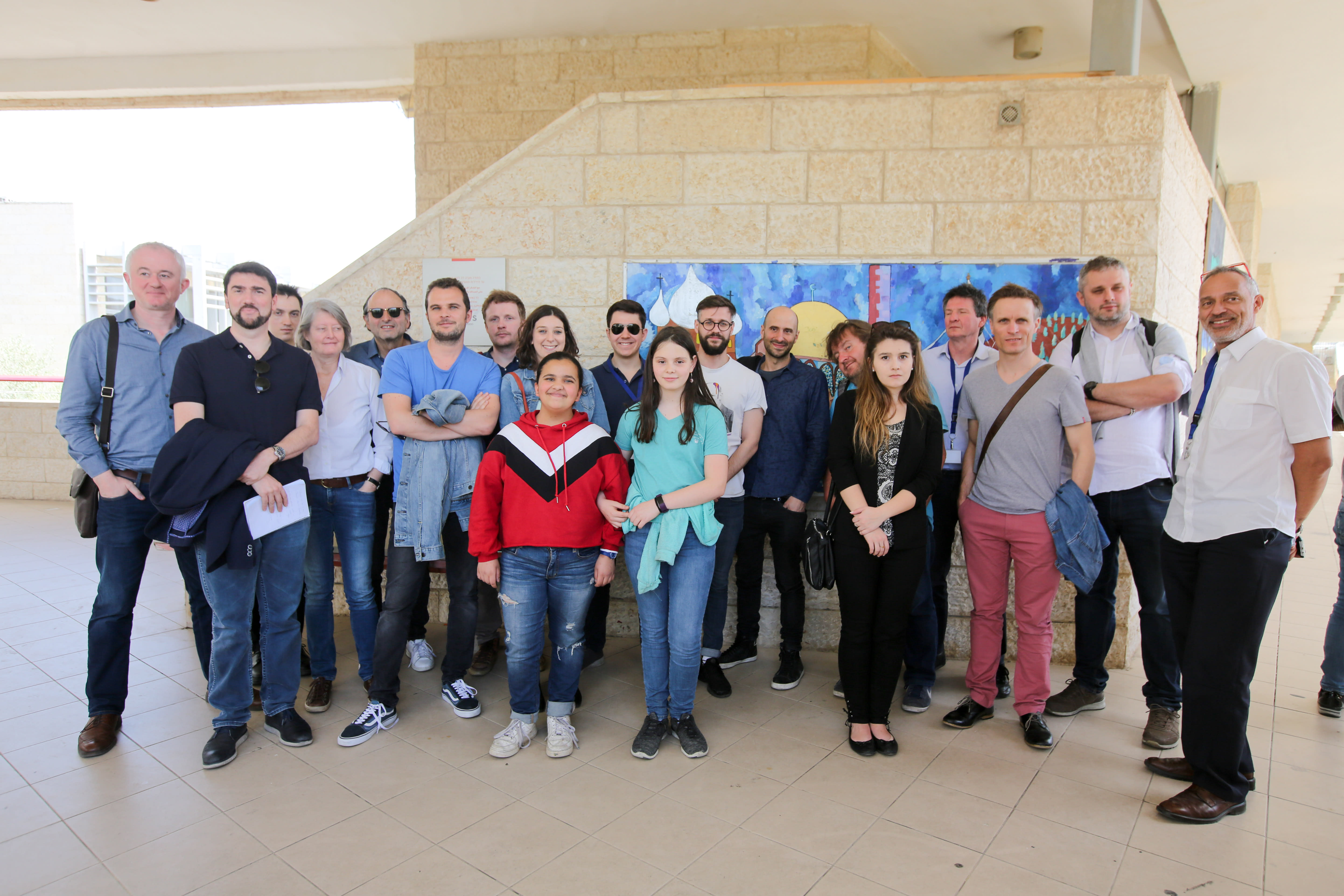 Foreign journalists pose in front of the Jerusalem Hand in Hand School during their visit to Israel
While Dusseuil didn’t agree with everything presented to her on this trip, she did find the experience enlightening when it comes to understanding the Israeli people.“Travel is the best way to learn. Meeting people is essential to fostering understanding,” she said. “Diverse viewpoints in the media is hard to accomplish.So seeing with your own eyes is absolutely necessary to understanding the bigger picture.”It is that exact goal – presenting information without preaching – which is what EIPA aims to achieve with these trips.“We are not preaching here,” Tal Rabina, EIPA strategic director and head of their Israel office, said. “We want to give opinion leaders the tools to see Israel for themselves and formulate their own opinion.”As such, in addition to trips like these, EIPA provides journalists with press briefings, key contacts, background information and analysis pieces so they can gain an unfiltered view of Israel’s complex situation.For Leaf Kalfayan, executive editor of the Daily Mail, “complex” was the key buzzword for a trip like this.“The word I’m hearing most often here is “complex,” but despite these complexities, you see that people live quite easily here and their lives are vibrant ones,” he said. “In Europe, where some countries experience high unemployment rates, we would be so lucky to live such a ‘complex’ life as they do here.“I’ve never been here before. Israel is seen through a prism of so many filters and lobby groups – be it Israeli, Christian or Muslim advocacy groups. So it’s hard to get a clear understanding of what’s going on here from afar,” he added after a visit to Regus’s first office in Jerusalem.After making a kid’s day by saving the aforementioned stuffed tiger in east Jerusalem, Tomasz experienced another personal encounter during his trip to the Holy City. During one of the meetings, he met the son of a Holocaust survivor who happened to be from his small town of Katowice, a city in Poland that was built on the foundation of its now decimated Jewish population.Although not Jewish, Tomasz obtained a master’s degree in Jewish studies and is fascinated by the deep historical, cultural and emotional connection his hometown has to the Jewish people.“Our shared history is one that’s been forgotten,” Tomasz said in a thinly veiled dig at the recent Holocaust Bill in Poland which outlaws any reference to Polish complicity in that horrific historical event.Therefore, coming face-to-face with a descendant of someone who fled the city provided a deep emotional moment for a journalist who had great affection for Israel and the Jewish people in general.“I’ve always liked Israel and have been fascinated by their ability to create a modern state out of nothing,” he said. “This is a modern country that has its own security and strategic concerns and this trip highlights that Israel is forging forward despite this.”“Twenty years ago, we thought Germany was the hub for innovation and igniting the global economy. That’s changing. Today, I think Israel can give Germany a run for its money.”While it’s doubtful the Jewish state will be going head-to-head with Angela Merkel anytime soon, Israel – and Jerusalem – have firmly put themselves on the map when it comes to global recognition of their hi-tech prowess.This article was written in cooperation with the  Ministry of Jerusalem and Heritage.