Gilad Erdan promises major changes to security arrangements at Damascus Gate, warns US not to fall into Abbas's trap. 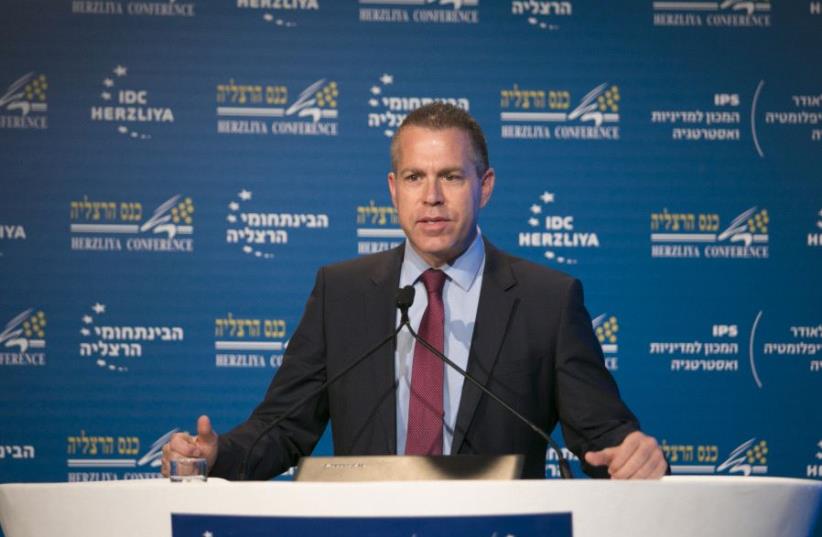 Gilad Erdan speaks at the Herzliya Conference
(photo credit: HAGAI FRID)
Advertisement
Public Security Minister Gilad Erdan promised an “unprecedented change” in security at Damascus Gate in Jerusalem’s Old City.“I can say that we are going to make an unprecedented change in the entire security system at the Damascus Gate – cameras, positions, intelligence, changing the territory – everything is done to significantly reduce attacks on this area,” he said at the Herzliya Conference on Thursday.Erdan said 32 attacks carried out by Palestinians have occurred at the hot spot over the past two years. The gate is the main entrance for Palestinians visiting from the West Bank and for Muslim residents of Jerusalem.Erdan said thousands of police officers have been deployed in the streets to reduce violence and improve response time since the start of a wave of “lone-wolf” Palestinian stabbing attacks in 2015. He added that video cameras are being installed throughout Jerusalem.Erdan’s statements came less than a week after three Palestinians from the West Bank carried out a shooting and stabbing attack near Damascus Gate, in which St.-Sgt-Maj.Hadas Malka, 23, was stabbed to death by one of the attackers and all three were shot and killed by police.Following the attack, Police Commissioner Roni Alsheikh said on Monday that Jerusalem will maintain normal life despite security concerns.“As important as upgrading security is, it should be combined with the ability to maintain a regular life,” he said. “Our challenge is to provide service and security without creating a contradiction between them. There is no intention of turning Jerusalem into a military fortress that is not pleasant to enter and travel in, both for Israelis and for tourists from all over the world.”Erdan accused Palestinian Authority President Mahmoud Abbas of inciting toward the terrorist attacks.“What’s needed is an international effort to end incitement, terrorism and violence instigated by the Palestinian Authority, the PLO and Fatah – all headed by Mahmoud Abbas – on a daily basis,” he said.Erdan said US President Donald Trump was wise to place the issue of incitement at the center of talks with the Palestinians, and he warned against “falling into Abbas’s trap.”“He will claim that the payments to terrorist’s families are a sort of welfare payment to families whose income has suffered,” Erdan said. “This is a clear lie. Abbas is already trying to hide the payments by only partially disclosing the PA’s budget and creating fake organizations to funnel the money.”