A 'Jpost' column wrapping up the hottest Jewish culture news worldwide: MBD and Shwekey team; "It Gets Better" for Orthodox Jews.

By LAHAV HARKOV
OCTOBER 21, 2010 15:06
weekly schmooze 311
(photo credit: Courtesy)
Advertisement
After former CNN host Rick Sanchez was fired for implying that Jews run the media, CollegeHumor contributor Jeff Rubin wondered what the media would be like if Sanchez was right. The answer is pretty funny; but maybe CNN should take some of the advice seriously. After all, it would be very convenient if the cable news let us all know when there's a sale at Loehmann's.Hanukah may be a month away, but the Schmooze has found the perfect gift for any Nice Jewish Girl. No, not a Tiffany heart; she probably has one of those already. The Nice Jewish Guys 2011 calendar describes itself as having "a compendium of dudes Mom would SO approve of. Real guys like Brian, whose fave movie is 'Annie Hall.'" Better yet, part of the proceeds from the calendar goes towards Mazon: A Jewish Response to Hunger.RELATED:
Ivanka Trump at the Jersey Shore
Israeli tweens have Bieber FeverThere are, of course, differences of opinion as to whether Shlomo Rubashkin is a Good Jewish Boy, or a very, very bad one. The kosher meat-packing executive was sentenced to 27 years in federal prison after being found guilty of 86 charges of fraud, including money laundering and failure to pay livestock providers on time. In August, Rubashkin's lawyers accused the presiding judge in the trial, Northern Iowa District Court Chief Judge Linda Reade, of a conflict of interest, and have filed for a retrial.Some in the haredi community have decided to protest the charge in a creative way, and founded Unity for Justice. "Rubashkin is clearly not a threat to society, yet he has been treated like a violent criminal," the organization's site explains. Therefore, the organization gathered 30 Jewish music superstars to sing the haredi version of "We Are The World." The song "UNITY," features major names like Mordechai Ben David, Avraham Fried, Yaakov Shwekey, Ohad Moskowitz and Lipa Shmeltzer, as well as hip-hop artist Y-Love and Israeli singer Aharon Razel.After a movie role and a critically-acclaimed run with Shakespeare in the Park, Al 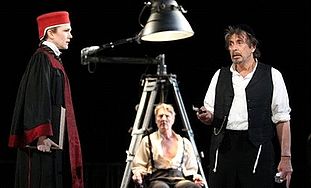 Pacino is about to put his kippa back on. The Oscar winner will reprise his performance as infamous Jewish moneylender Shylock in a new Broadway production of The Merchant of Venice, which opens this week at the Delacorte Theater. The New York Times critic Ben Brantley said that "as with most of Mr. Pacino's performances, this one is deeply intelligent and deeply irritating," a style that just might make sense for Shylock.Also in New York, as you may have heard, gubernatorial candidate Carl Paladino announced to a haredi audience that he doesn't want children to be "brainwashed into thinking that homosexuality is an equally valid and successful option." Apparently, this speech lost Paladino the Orthodox Jewish vote, and American haredi site Yeshiva World News lists five reasons why. The site explains that Paladino partnered with a fringe rabbi, campaigned in a synagogue, and assumed that Boro Park residents are Amish – meaning, they don't have video phones that can record controversial speeches.After a rash of suicides by gay teenagers who experienced bullying in recent months, advice columnist Dan Savage and his partner posted a YouTube video titled "It Gets Better," telling LGBT teens to tough it out, because there is a future for them. Savage encouraged others to post similar videos, and there are currently hundreds of thousands of "It Gets Better" videos. Here's one by Jewish American Idol winner Adam Lambert, who also happens to be gay, but as he says, "there's so much more to me than just who I chooses to sleep with":Orthodox Rabbi Steven Greenberg, who is also gay, wrote an opinion piece called "The Cost Of Standing Idly By," to address the issue of homophobic bullying. Greenberg writes about his own experience with a rabbi who told him he should commit suicide, and encourages his readers to sign a pledge by Jewish LGBT advocacy group Keshet, which "commit[s] to ending homophobic bullying or harassment of any kind in our synagogues, schools, organizations, and communities. " Many prominent Orthodox leaders from around the world signed on to a similar initiative over the summer, titled "Statement of Principles on the Place of Jews with a Homosexual Orientation in Our Community." The Weekly Schmooze collects the hottest Jewish culture news from around the world. Ranging from celebrities to philanthropy to quirky communities, we're here to schmooze about Jews.If you have any news to share with The Weekly Schmooze, write to weeklyschoomze@gmail.com
Advertisement
Subscribe for our daily newsletter