Anthony Weiner "puts voter in his place," tells reporters New Yorkers "need a leader who will express emotion if it's appropriate."

By JPOSTLEO GIOSUÈCOM STAFF, REUTERS
Anthony Weiner in altercation with Jewish man 370
(photo credit: Video screenshot)
Advertisement
Anthony Weiner, the disgraced former congressman who has seen his mayoral prospects dwindle in light of embarrassing revelations regarding his behavior on Twitter, once again made headlines early Thursday, this time over controversial remarks directed at him by a prospective Jewish voter in Brooklyn."Yeah, it takes one to know one, jackass," Weiner is heard calling out over his shoulder as he exited a bakery in a predominantly Jewish area of Brooklyn, his cheek stuffed with a bite of cake. According to the Talking Points Memo website, Weiner accosted a patron who was heard provoking the former congressman with a remark about the ethnicity of his wife. Within earshot of the mayoral candidate who was stumping on Rosh Hashanah eve, the customer reportedly made reference to the fact that Weiner is “married to an Arab.”Weiner is married to Huma Abedin, an American-born high-profile political operative and former aide to Hillary Clinton whose family originated in Saudi Arabia. 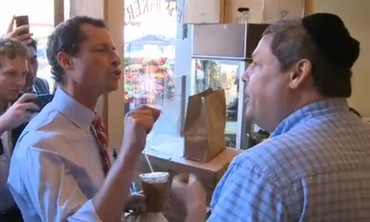 The remark prompted Weiner to unleash an angry tirade at the man, who proceeded to criticize the candidate. The two men then engaged in a heated exchange."What rabbi told you that you were my judge?" Weiner, who is Jewish, says in the video clip as he walks back into the bakery."You want to believe you're superior. But you're not," Weiner continues. "Where do you get the morality to judge me? Do you know who judges me? Not you. You don't get to judge me because you have shown no sign you are superior to me, and you are not my God."The confrontation, captured by a local blogger and posted online, appeared to center on the lewd-picture scandal that led Weiner to resign from Congress in 2011. After new pictures emerged this summer, his lead in the polls collapsed.In a new Quinnipiac poll, just 7 percent of likely Democratic primary voters said they would support him."I think I put him in his place," Weiner told reporters after the incident in a separate video posted by the website Talking Points Memo. "Just because someone is running for office doesn't mean you have an unabridged right to say whatever nasty and vile things you want.""I think New Yorkers need a leader who will express emotion if it's appropriate," Weiner said.