The best way to see the effect of a certain piece of furniture in one’s home environment is to experience its physical presence.

(photo credit: ROCHE BOBOIS)
In Israel today, people are much more fashion conscious than in the past. This is reflected in the way they want to furnish their homes. The purchase of fashionable furnishings may be influenced by TV and the Internet and by the large number of people who have holidayed overseas. When they vacation in London, Paris, Madrid, or Milan, they see beautiful furniture, and this influences what they would like to see in their homes. In addition, tasteful furniture can be seen on TV shows and in films, as well as home décor magazines. And the Internet offers a vast market for home furnishings as well.

One can order furnishings directly from abroad, but that is not strictly necessary. The best way to see the effect of a certain piece of furniture in one’s home environment is to experience its physical presence. This does not pose a problem because many leading furniture designers have representatives in Israel with large showrooms. Consequently, one can purchase fashionable furniture directly if it is in stock or order it through the manufacturer’s agents or representatives in Israel.

Premises and their parameters

Home furnishing is a very dynamic industry. Like all fashionable wares, it is constantly evolving and adapting to new design trends, new styles, new fabrics, and advances in technology. The choices are extensive because the number of furniture designers and manufacturers is enormous.

When the fashion-conscious in Israel decorate their homes, they are well aware of these developments and want their premises to be beautiful, on trend, and impressive. They usually engage the services of an interior designer to help them furnish their homes according to their taste. Other factors are taken into account as well, such as the lifestyle of the occupants and the location of the dwelling. For example, people who work from home require an office space that is separate from the living area. Some families like to spend their time indoors, while others enjoy a comfortable outdoor environment. In regard to weather, furnishing a home in a hot area like Eilat will differ from furnishing a home in a city with a cool climate such as Jerusalem. Similarly, furnishing a home in a seaside city like Netanya or Nahariya differs from doing so in an inland city such as Afula.

But no matter where the homes are located, residents are influenced by current trends. One of the latest trends is the use of unusual, unique pieces of furniture. For example, there are pieces that create a sculptural effect. Today, furniture is also designed with ecology in mind, hence there is a wide range of furnishings that implement natural materials such as wood, boucle, boiled wool, canvas, and sisal. In addition, a large number of furniture designers and manufacturers use recycled materials.

As there are countless furniture designers around the globe, their designs are influenced by the motifs of their home countries. This diversity creates a wide variety of ethnic and eclectic styles.

Roche Bobois, a leading French furniture producer, is represented in Israel by the firm of Pitaro Hecht, with showrooms in the Herzliya Pituah hi-tech industrial park. Liron Blumner, the VP of marketing, explains, “As a firm that specializes in designing furniture, Roche Bobois is almost unique. It employs a wide range of world-renowned designers from distinct parts of the world; consequently, its creations are spectacular and varied. The roster includes designers such as Sophie Larger, Jean Paul Gaultier, and Ora Ito from France, Kenzo Takada from Japan, and others.

The result is a range of exquisitely designed pieces of furniture which satisfy the needs of the most discerning furniture-conscious clientele. These items are also much in demand by leading interior decorators because they help them realize the dream home of many of their clients.” 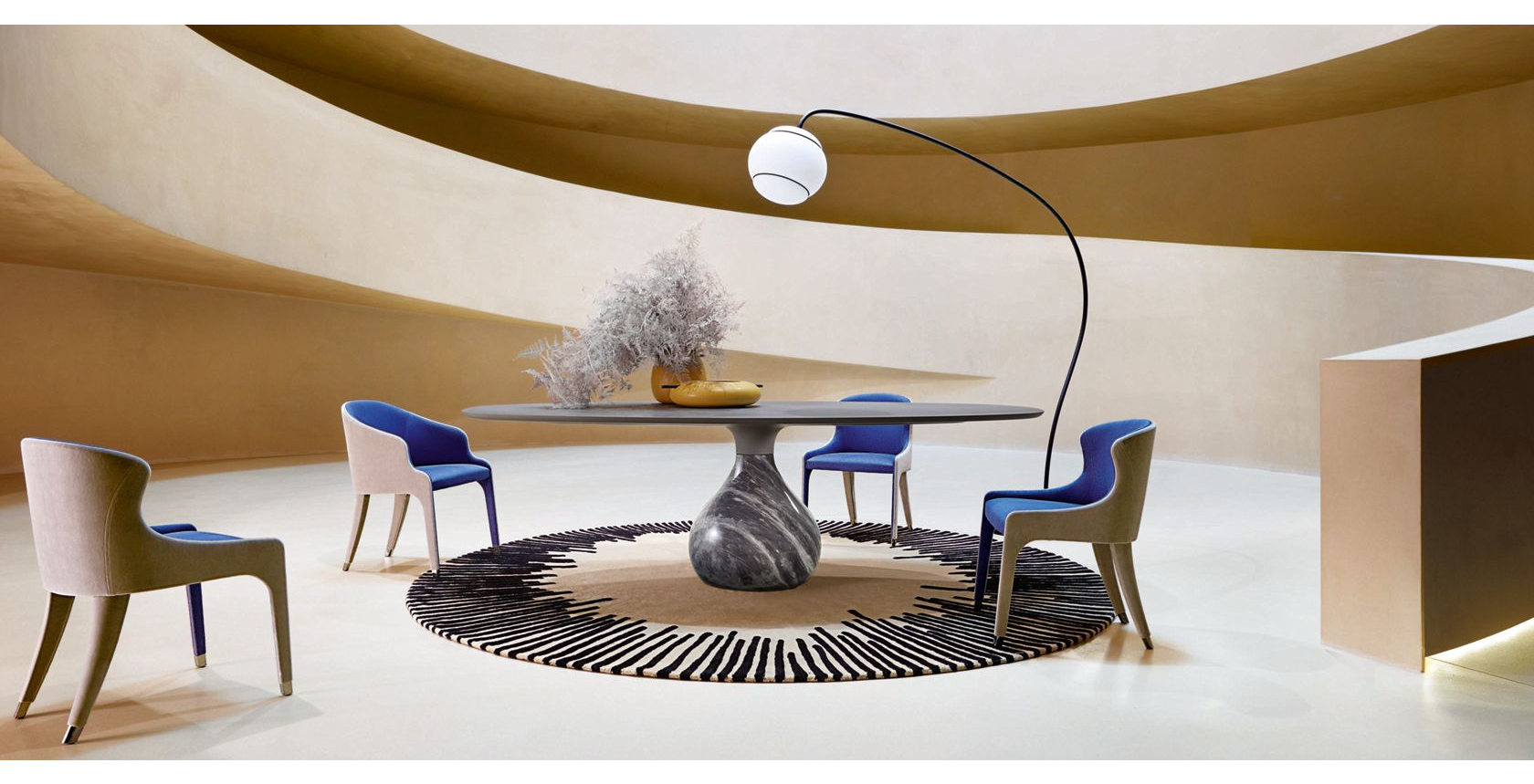 Besides employing the services of in-house designers, Roche Bobois works with a wide range of manufacturers that have in-house designers with their own. The company incorporates them into their collections, thereby enhancing the variety and colorfulness of the two collections it launches each year.

One of the designers working with Roche Bobois is internationally renowned Portuguese designer Joana Vasconcelos. Based in Lisbon, the prolific artist has been active for more than 20 years. In 2012, she was the first woman artist, as well as the youngest person, to exhibit her creations in France’s lavish Palace of Versailles. She also held an exhibition in the Portuguese pavilion at the 55th Biennale in Venice and at the Trafaria Praia exhibition in the Guggenheim Museum in Bilbao, Spain.

Due to her prominence, Vasconcelos was chosen by Roche Bobois to design its Bombom collection. The premier collection celebrates the 60-year development of the company. The anniversary collection is essentially French but features decorative motifs associated with Portugal. Composed of furniture pieces and accessories, the Bombom collection is a symphony of colors and shapes that would add luster to any home.

photo credit: Roche BoboisBOMBOM | Sofa Bombom Collection By Roche Bobois design Joana VasconcelosAs one of its many distinguished projects, Roche Bobois designed the condominiums in Miami’s Monad Terrace in collaborationwith Rita Chraibi of the International Designers Agency. Considered one of the most prestigious residential complexes in South Beach, Monad Terrace is located on the waterfront, with an exceptional view of Biscayne Bay. The building, composed of 59 luxury residences, with a surface area of nearly 500 square meters, was designed by French architect Jean Nouvel. The residences furnished by Roche Bobois feature many of the brand's emblematic pieces, such as the Courchevel bed; the Aqua and Ovni cocktail tables; the Digital sofa; and the Dolphin armchair. Monad Terrace is a particularly spectacular example of the projects carried out by Roche Bobois’s Trade and Contract Department.