The project has been developed by a team of researchers headed by Prof. Pini Gurfil, head of the Asher Institute for Space Research and a member of the aerospace engineering faculty at the Technion. 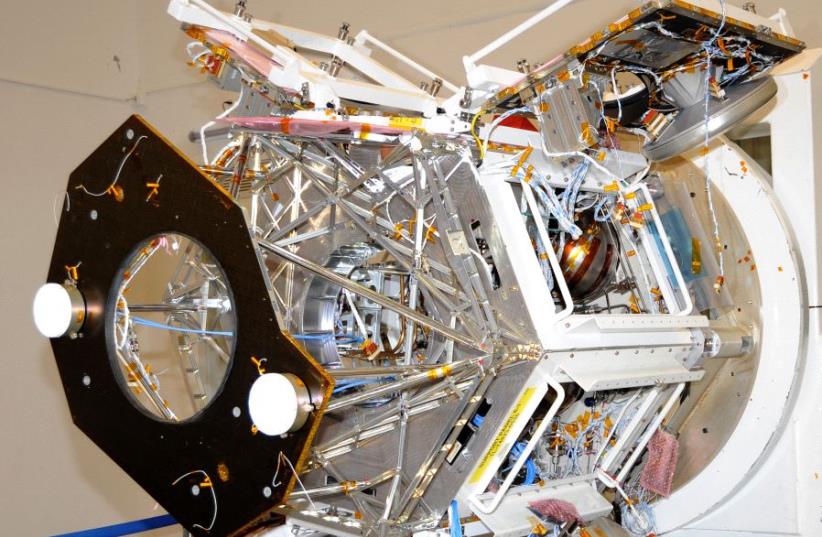 VENuS Satellite - Israel Space Agency & Israel Ministry of Science and Technology
(photo credit: COURTESY ISA/SCIENCE, TECHNOLOGY AND SPACE MINISTRY,ISRAEL SPACE AGENCY,MINISTRY OF SCIENCE. TECHNOLOGY AND SPACE‏)
Advertisement
A group of three nano-satellites developed by scientists from Haifa’s Technion-Israel Institute of Technology will be the first autonomous spacecraft in the world to be flown in formation.The project, developed with the support of the Adelis-Samson Foundation and the Israeli Space Agency (ISA) in the Science and Technology Ministry, will be launched on the Indian launcher PSLV at the end of 2018 by the Dutch company Innovative Solutions In Space, which specializes in launching nano-satellites.The project has been developed by a team of researchers headed by Prof. Pini Gurfil, head of the Asher Institute for Space Research and a member of the aerospace engineering faculty at the Technion. It is designed to prove that a combination of satellites can hold together in a controlled formation for a year some 600 kilometers above Earth. A successful small model of the nano-satellites also exist at the Technion.“Israeli technology is breaking boundaries and proving its innovation again and again,” commented Science and Technology Minister Ofir Akunis on Monday. “We are proud to be part of this flagship project, which is a significant contribution to the advancement of space in Israel and to the training of students in the field.”The satellites will be used to receive signals from Earth and calculate the location of the source of the broadcast for rescue, detection, remote sensing and environmental monitoring. Each of the satellites is 10 cm. x 20 cm. x 30 cm. – about the size of a shoebox – and weighs about eight kg. They will be equipped with measuring devices, antennas, computer and control systems and navigation devices. The software and algorithms that will control the flight were developed in a laboratory for distributed space systems at the Technion.“Miniaturization in the field of satellites, together with advanced Israeli technology, allows us to take Israel an important step forward with mini-satellites,” explained Gurfil. “The degree of innovation of nano-satellites can be compared to switching from a PC to a mobile phone, which offers far more capabilities than its predecessors.”“The field of nanosciences has been increasing significantly in recent years and the number of launches doubles every year,” added ISA director Avi Blasberger. “The development and launch costs of such satellites, capable of filling a variety of uses, are significantly lower than those of conventional satellites... In the near future, networks are expected to include thousands of nano-satellites that will cover the Earth and enable high-speed Internet communications at a significantly lower cost than today.”“The nanoscale program was made possible by the generosity of donors from Israel and abroad who understand the importance of space exploration for Israel’s security and prosperity,” said Prof. Boaz Golani, the Technion’s vice president for external relations and resource development. “The Technion thanks its supporters, headed by the Adelis Foundation, for their important contribution to the realization of this program and is proud of its partnership with Israel’s space industry without the active help of the relevant industry players.”The unique features of the satellites are all locally produced. Rafael’s krypton gas-based propulsion system will be the first of its kind in the world to fly a tiny satellite. The digital receiver was developed by Elta and the guidance control system was developed at the Israel Aircraft Industries’ Mabat plant in cooperation with the Technion researchers.In addition to the propulsion system, the satellites will accumulate energy through solar panels that will be spread out alongside each satellite and serve as wings that will be able to control the flight of the nano-satellites’ structures without the use of fuel through air resistance in the atmosphere.Each of the satellites will have a digital signal receiver, one of the most complex receivers ever designed in a nanoscale. The satellite information-processing system and the algorithms that will maintain the formation will be the first of their kind in the world and support the autonomous operation of several satellites together.The communication and navigation systems will include two GPS receivers, through which the three nano-satellites will communicate with one another and with the ground station -- a significant challenge that has been solved in the current project. A dedicated frequency will be used to transfer information to the Earth in broadband.“If we can prove in an experiment in space that the flight of satellites in formation is possible,” Gurfil concluded, “it will be a significant boost to the development of small satellites and technologies related to minimizing electronic components, efficient space processing and space propulsion systems.”