From building Efrat to Orthodox women rabbis to Christian relations.

In the Orthodox world of today, the rosh yeshiva, or head of the rabbinical seminary, is often regarded as the supreme authority in matters of Jewish law, while the synagogue rabbi is often relegated to a position of lesser importance.

Renowned as a gifted orator, halachic authority and educational pioneer through the Ohr Torah Stone network he founded, Riskin has made his mark on the Jewish community around the world as a rabbi who combines empathy, innovation, scholarship and courage.

Hokhma Lishlomo – Essays in honor of Rabbi Dr. Shlomo Riskin is a collection of articles in Hebrew and English, penned by more than 40 scholars from around the world in tribute to his leadership and accomplishments. The book contains 42 articles – 30 in Hebrew and 12 in English, whose overall content reflects the nature and style of Riskin’s leadership over almost 60 years. 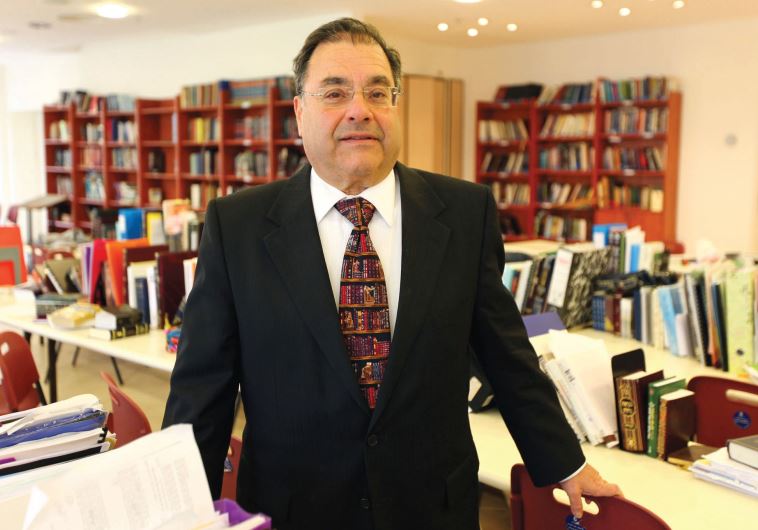 The subjects of the articles themselves touch upon many of Riskin’s unique characteristics. Rabbi Eliahu Birnbaum, founding director of Ohr Torah Stone’s Beren-Amiel Educational Emissary Program, which trains educators to teach in the Diaspora, writes about the changing nature of the Jewish community and rabbinic responsibility today. Rabbis, he notes, must be more than mere decisors in matters of Jewish law. They need to be aware of the spiritual and emotional needs of individuals in their community as well.

Riskin, of course, is well known for the empathy and understanding he has for all community members.

He stands out for his support of women’s Torah study through the full-time learning initiatives for women offered by Midreshet Lindenbaum, another Ohr Torah Stone school, as well as his public statements on the subject.

Rosenfeld, appointed by Riskin as a communal spiritual leader in Efrat, contributed a fascinating article to the book, detailing the successes and failures that occurred during her term in Efrat. Her honest appraisal of the situation and why she did not remain in the position is instructive.

One of the primary roles of the rabbi is to adjudicate matters in Jewish law, and several articles discuss specific issues in Halacha.

Rabbi Ohad Taharlev, who heads the Israeli programs at Midreshet Lindenbaum, writes about the role compassion plays in halachic decision-making, mentioning a decision by Rabbi Ovadia Yosef, as well as Riskin’s opinions in case of get refusal, and the attitude of Judaism toward members of the LGBTQ community.

Taharlev writes (translated from the Hebrew), “The entire enterprise of Rabbi Riskin’s life stems from a place of love, compassion and sensitivity to the ‘other’ and his willingness to fight for the care of the weak, correction of social injustices and repairing the world.”

Riskin is also known for developing a variety of Jewish-Christian dialogue and exchange programs.

An English-language article by Rabbi Dr. Shlomo Brody provides a somewhat less tolerant position of Riskin regarding administering capital punishment to terrorists. The article stems from a statement by Riskin after the 2018 murder of 11 Jews at the Tree of Life Congregation in Pittsburgh.

Brody notes that Riskin’s halachic positions are not always predictable, which in his words “is one the hallmarks of a nuanced and profound thinker.”

Brody traces different points of view on the subject, ranging from the Talmud to modern-day positions discussed by some of Israel’s chief rabbis.

Riskin is noted as a leader and visionary, and an essay contributed by the late Rabbi Jonathan Sacks touches on the concept of leadership and the requirement that leaders continue to study and learn throughout their lives. Sacks explains that the Hebrew word “hokhma” means worldly wisdom, which is universally available to all rather than a special heritage of Jews and Judaism. “To be a Jewish leader,” he writes, “means spending time to study both Torah and ‘hokhma’: hokhma to understand the world as it is, Torah to understand the world as it ought to be.”

Hokhma Lishlomo brims with fascinating articles on a variety of subjects, ranging from an analysis of the mitzvah of making aliyah in our time by Rabbi Eliezer Melamed, which is particularly relevant in the case of Riskin – who left a highly successful rabbinic career in the US to move to Israel; to a fascinating article by Dr. Shmuel Wygoda, head of the department of Jewish philosophy at Herzog College, discussing the analytical methods of Nehama Leibowitz, the famed Bible scholar and teacher whose works Riskin greatly admires.

I found myself eagerly looking forward to Shabbat morning services, when I could take this book with me to the synagogue and peruse articles at my leisure. Those who can read and understand the Hebrew text will undoubtedly gain more from the book than those who are limited to the English essays.

In a time when Israel’s official Chief Rabbinate is increasingly out of touch with the community it serves, Hokhma Lishlomo illustrates what a visionary and courageous rabbi can accomplish. 