This Passover, are you allowed to sell your hametz online?

In our era, when online forms are frequently utilized instead of paper documents, I see no reason to deem this mechanism as a less legitimate method of appointment.

In recent years, more and more rabbinic organizations are offering Jews to “sell their hametz” online. Together, these organizations handle each year the equivalent of hundreds of billions of dollars of food.

The Chief Rabbinate alone sells $150 billion dollars worth of hametz to a non-Jewish resident of Abu Ghosh. The sheer vastness of this number, as well as the scattered locations of the hametz and the now virtual appointment of the rabbinic agent, leads some to wonder about the legality of the sale. This mass transaction, however, is only the latest stage in the history of mechirat hametz, the selling of Jewish bread to non-Jews before Passover.

Beyond forbidding the consumption of bread, the Torah twice forbids owning hametz (Exodus 12:19, 13:7). To uphold these commandments, one must relinquish all ownership claims of the hametz (bitul), and remove them from one’s physical possession (bi’ur). To accomplish the latter goal, one can either consume or burn the hametz, or give it, permanently, to a non-Jew.

One source from antiquity, however, speaks of a case where a Jew can give hametz to a non-Jew, and receive it back after Passover. If a person is stuck on a boat and will require bread rations after the holiday, he may unconditionally sell his hametz to a non-Jew, or ask the non-Jew to purchase additional rations over the holiday, with the implicit understanding that the non-Jew will sell him the hametz after the holiday. While the rabbis deemed this sale as entirely legitimate, it was clearly a case of dire need (sha’at dechak). 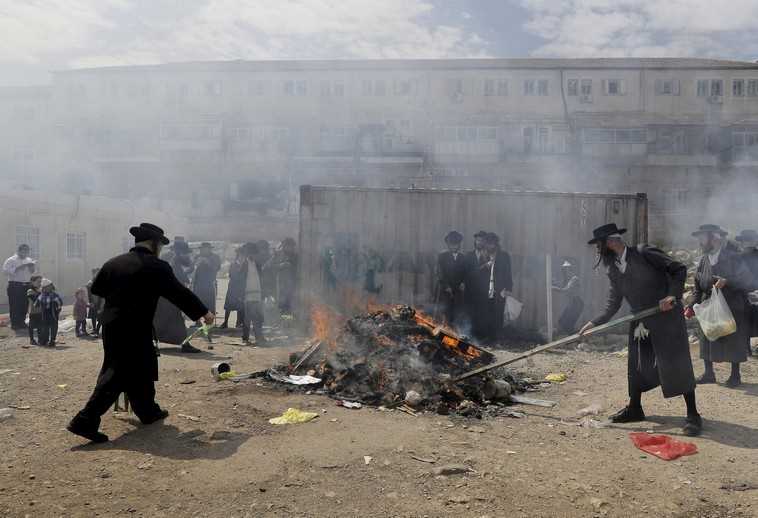 The burning of hametz in Jerusalem ahead of Passover, April 3, 2015 (credit: REUTERS)

Two major decisors, however, defended the yearly selling of hametz to non-Jews. Rabbis Israel Isserlein (14th century, Germany) and Yosef Karo (16th century, Safed) both ruled that as long as one fulfills the technical requisites of transactions, the sale remains valid, even though it was understood that the gentile would resell the hametz back after the holiday. However, both demanded that one remove the hametz from one’s house in order to fulfill proper sale protocol. Some Jews today continue to conform to this requirement, bringing their hametz to a location that the non-Jew owns.

All of this remained practical in eras without refrigerators and food preservatives when Jews possessed a minimal amount of hametz that would remain edible past the holiday. Yet in the late 16th century, Polish Jews entered the liquor industry, and it was unfeasible to rid their large warehouses of all hametz. Meeting this challenge, Rabbi Yoel Sirkes (1561-1640) employed several legal mechanisms that would allow the transaction to take place without requiring the company owners to remove the hametz from their premises.

WHILE THESE large-scale transactions were originally intended for businesses, they soon were used for individual homeowners, with Passover Haggadot sometimes providing forms and instructions. Some scholars raised fundamental objections to this phenomenon, deeming it inappropriate to use a legal loophole to avoid the relatively minimal financial losses to individuals. Other problems emerged when individuals made mistakes in the intricacies of the transaction.

As such, for over a century, most people have appointed a rabbi as their agent to sell their hametz on Passover eve, providing him with the location of their hametz and its estimated value.

Utilizing a middle-man made these transactions more common yet also more indirect, thereby adding further opposition to these sales. Many rabbinic figures, ranging from the 18th-century Lithuanian authority Vilna Gaon to more recent figures like Rabbi Joseph Soloveitchik, have encouraged people not to use this mechanism, especially to sell full-fledged bread (hametz gamur). Their concerns varied, with some apprehensive over the soundness of the transaction and others questioning the propriety of using legal loopholes.

Major rabbinic figures like Rabbis Moshe Sofer and Moshe Feinstein, however, have aptly defended these sales as both valid and legitimate. All agree, however, that the sellers should take these sales seriously to actualize the transaction.

Given this historical background, some people raise concerns that filling out a mechirat hametz form online is somehow more problematic. I believe that this misconception stems from a fundamental misunderstanding of the process. Whether one fills out a form online or signs a paper in their synagogue, they are doing the same legal act: appointing the stated rabbi and his representatives to sell their hametz.

In our era, when online forms are frequently utilized instead of paper documents, I see no reason to deem this mechanism as a less legitimate method of appointment. In fact, many online forms do a better job of explaining the process while providing a systematic way for the rabbi and the non-Jewish buyer to keep track of all the merchandise.

Admittedly, there is something nice about the human interaction provided from meeting one’s rabbi before Passover. (Historically, moreover, when rabbis did not have fixed salaries, it was a time for community members to provide support for his material sustenance.) Yet given the hectic preparations necessary before the holiday, providing convenient alternatives for both rabbis and community members is a case of technological progress. ■

The writer is the co-dean of the Tikvah Online Academy and the author of A Guide to the Complex: Contemporary Halakhic Debates.