Appaholic: Hebrew at every level

By ZOHAR FRIEDMAN
iphones R 311
(photo credit: REUTERS)
Advertisement
Achieving some sort of foundation in Hebrew is important to a variety of Jews with a variety of goals. Whether your aim is to be able to comfortably read a prayer book in synagogue, desperately want to learn a few key phrases for an upcoming vacation to Israel, or prepare for your aliya, there’s an app for that—or rather, there are way too many apps for that!This week, we’ve waded through and perused an astounding level of mediocrity to find you five apps that effectively and innovatively do what you want them to: teach you Hebrew.Let’s get literateYour motivations for learning to read and write Hebrew may be varied—but regardless of your motivation, the challenge is high for most English speakers. Hebrew uses an entirely foreign alphabet—which even comes in a script form. Finding a good app to familiarize you with both of these alphabets is challenging. While there are countless apps that teach you the Hebrew alphabet with varying degrees of innovation, only one app teaches both the script and block alphabet—which is important to the student who wants to master both reading and writing.iScript Hebrew not only includes interactive tutorials on how to write both the block and script characters, it also includes detailed descriptions of the sounds of both letters and how to use the vowels. Numeric values of letters (gematria) is also included. The best part is that all this information is broken down in a way that is entirely friendly and straightforward to the English speaker. 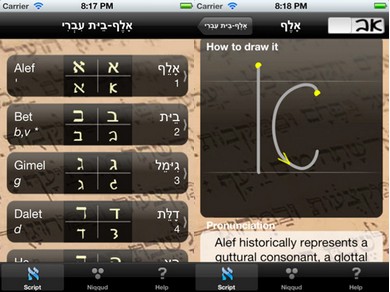 Cost: $2.99Supported formats: iPhone, iPod touch, iPadThe traveler and the touristAre you planning an adventure to Israel and considering taking a walk on the path less traveled; as in you want to stay outside of English-friendly tourist hot spots? Want some basic Hebrew in your pocket - or should we say phone - to help you out in any difficult situations where your English might be useless? Prepare for this adventure with confidence! Hebrew Next is a handy little app that serves as a basic phrase guide for those with little to no foundation in Hebrew. Developed originally for Birthright participants, this helpful application sorts phrases into several situation-based groups, such as airport, food, health and greetings. Each category comes with a list of important phrases that you might need to use, available in both written and recorded formats. The best part is if you're ever in a desperate situation and forget the phrase you’re looking for, you can probably just show your iPhone to the attempted target of your communication and breathe easy. Problem solved. 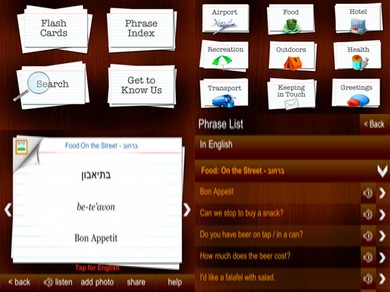 Cost: FreeSupported formats: iPhone, iPod touch, iPadAn extended stayPrepping for a semester abroad in Israel? Or panning a longer stay? Maybe you are making aliya? Most students of Hebrew who have a foundation in the language still struggle with one key area, often neglected by textbooks: Spoken Hebrew—something that likely sounds like a ton of fast-paced gibberish to the untrained ear.Hebrew in a Month will increase your comfort level with spoken Hebrew. This app uses no English to teach you Hebrew; instead it teaches you visually through the use of pictures, spoken Hebrew and interactive matching quizzes. Furthermore, each picture-caption is repeated in both a male and female voice at a fairly natural pace. While we wouldn’t recommend you use this app as the sole method of learning Hebrew, if you need more oral to the rhythm of spoken Hebrew and her syntactical quirks, this is the app for you. 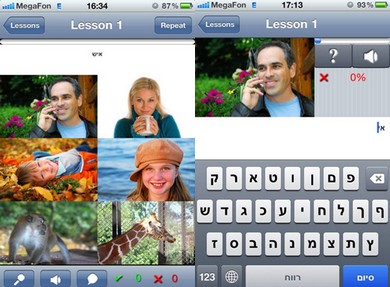 Cost: $2.99Supported formats: iPhone, iPod touch, iPadStart ‘em youngGetting your child to learn a foreign language is tough. Whether your son or daughter participates in a Hebrew-intensive summer camp, Sunday school, or learns Hebrew at their Jewish day or boarding school, we’re guessing he/she could use a little bit of inspiration. Hebrew for Children might be the ticket. Short video units with spoken Hebrew, written Hebrew—both transliterated and in the original form, as well as the English translation comprise the app’s core lessons. Each lesson is followed by an interactive chapter quiz to help get the new vocabulary to stick. 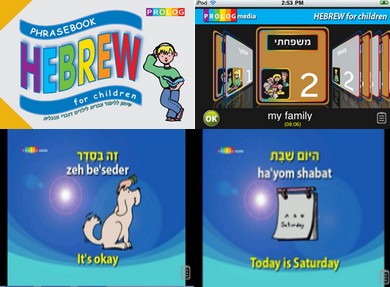 Cost: $3.99Supported formats: iPhone, iPod touch, iPad; Android  Look it upThere are a number of bad English-Hebrew dictionaries out there—and many of them have the nerve to cost you money! Ask any seasoned student of Hebrew (or Israeli student of English) and almost all will mention the popular Hebrew-English dictionary website, Morfix.mako.co.il. Now available in app form, Morfix, has made its way to your smart phone. Hint: To find this app more easily, do yourself a favor and search for it in Hebrew, although a search results for “Hebrew-English dictionary” will eventually also yeild you to this treasure of a resource. 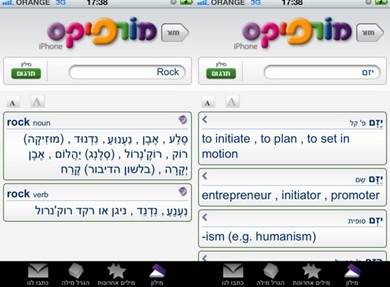 Cost: FreeSupported formats: iPhone, iPod touch, iPad; Android  Appaholic is a bi-weekly column which thematically reviews mobile apps with a Jewish or Israeli twist. If you have an app to suggest, send details to [email protected]Follow @JPost_Lifestyle