Check out the apps that will get you ready to rock a kosher, nourishing and most importantly joyous holiday.

By ZOHAR FRIEDMAN
iphones R 311
(photo credit: REUTERS)
Advertisement
Passover is almost here. Are you ready? As one of the most work-intensive and beloved of all the Jewish holidays comes rolling around the corner, we’ve assembled the top five apps to help get you into holiday spirit. Whether you have halahic questions that need answering, are struggling to prepare your seder menu, or simply need some holiday-themed entertainment for your children while you clean, we’re here for you. On the subject of eatingFor some, Passover is the time to demonstrate how creativity flourishes under constraints. For others, Passover is a time to eat a lot of matza. If you fall in the second category then you might be dreading feeling over-carbed and undernourished, walking around in a gloomy daze with the gritty taste of mazta crumbs stuck in your teeth. Well we have the app for you. Food Street: Passover brings you a lovely assortment of hag-friendly recipes to spice up your holiday. Whether you need the perfect dessert for your seder, a slightly more interesting for your family, or your simply sick of matza, give this app a try. 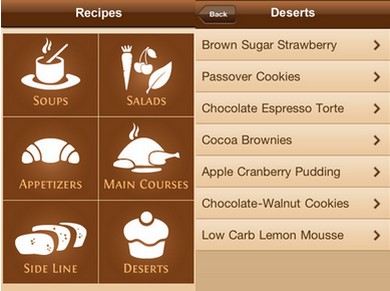 Cost: $0.99Supported formats: iPhone, iPod touch, iPad Count downOn the second day of Passover, we begin the counting of the Omer. The Sefiros app, however, shows us that counting of the Omer is much more than a simple count down. According to Jewish tradition, this is a time for spiritual renewal and personal growth, marked by introspection and the attempt to more fully embody what it means to be created in God’s image. Based on the indentically-titled book by Rabbi Haber, and created by a talented team of Anglos living in Israel, Sefiros will guide you through each day of the Omer. 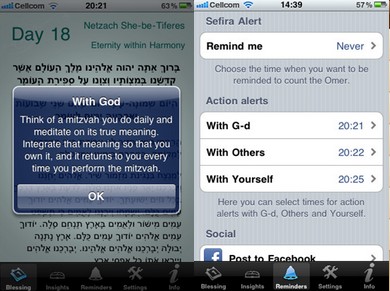 Cost: $4.99Supported formats: iPhone, iPod touch, iPad Sell, search and destroy: HametzGet out your feather, wooden spoon and candle: The time has come to get rid of every last trace of Hametz. Oh didn’t I mention? This year, there’s an app for that. Rustybrick’s No Chametz walks you through the selling, searching and destroying of all your forbidden foods. Equipped with a guide on the halahot that accompany each of these tasks, this app also includes the respective blessings that must be recited, as well as the dates and deadlines by which all of these duties must be completed. 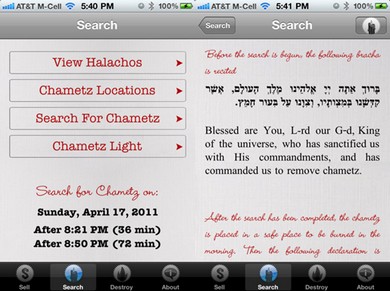 Cost: FreeSupported formats: iPhone, iPod touch, iPad This nightWe aren’t suggesting you turn child-rearing over to your iPhone, but while you’re doing your Passover cleaning or dusting off your haggadot, why not allow it at least to help and give Jeremy poisson’s iMahNishtana app a try. This app will provide educational entertainment for your child, and most importantly, help prepare them for the rather daunting responsibility of chanting the Ma Nishtana at your seder. Not only will this app teach them the words and the tune, it also teaches the meaning behind the Hebrew through fun, interactive drills. Best of all, there's a record function. Your child can record his/her chanting and listen to the playback for an extra confidence boost and to play to their narcissism! 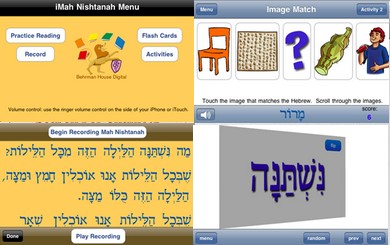 Cost: $0.99Supported formats: iPhone, iPod touch, iPad By the booksWhat can we actually eat during the holiday? This Passover, OU Kosher (also available for android)—an app that combines the former OU Passover app and a general kosher foods directory—will answer your most pressing food-related questions, and possibly more. Simply type in your food of choice, and watch the answer as to whether it's kosher for Passover appear below. Best of all, should the answer not appear, use the hotline function to send a question directly to the OU. 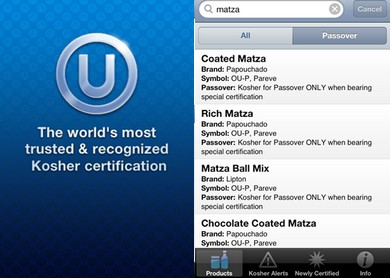 Cost: FreeSupported formats: iPhone, iPod touch, iPad, Android  Appaholic is a bi-weekly column which thematically reviews mobile apps with a Jewish or Israeli twist. If you have an app to suggest, send details to [email protected]