Encouraging coexistence through art in Haifa

A walking tour through Haifa’s Arab quarter is an impressive display of art and artistic interpretations of life in Israel.

By LAURA KELLY
Haifa street art
(photo credit: Laura Kelly)
Advertisement
“She goes to his grave, holding their newborn child,” said Asaf Ron, executive director for Haifa’s Beit HaGeffen Arab Jewish Cultural Center. “She asks how their son should be raised. ‘If I raise him Arab, he won’t have a good life here, if I raise him Jewish, he won’t have a good life because his mother is Arab.’”Ron is paraphrasing the final monologue of the main character in A Trumpet in the Wadi, a dramatic love story by Israeli author, Sami Michael. The story takes place in Wadi Nisnas, the Arab quarter in the city of Haifa. Today, the walls, buildings and streets of the neighborhood are an outdoors museum of street art that reflect on the complicated narratives in Israel that Michael first touched on in his literature. The decision to use Wadi Nisnas as a canvas for art came through the inception of Haifa’s annual “Festival of Festivals.” Each year artists contribute more works to the neighborhood in line with the theme of the festival. In addition to the art in the neighborhood, the Beit HaGeffen gallery has new contributions based on this year’s theme of “Log in, Log out,” in a nod to the digital age. The “Festival of Festivals” began in 1993 when the Muslim holiday of Ramadan, the Christian holiday of Christmas and Jewish festival of Hanukka all took place simultaneously. Ramadan was in August of this year but Ron joked, “we are optimistic that in 19 more years, Ramadan will be back in December.“ 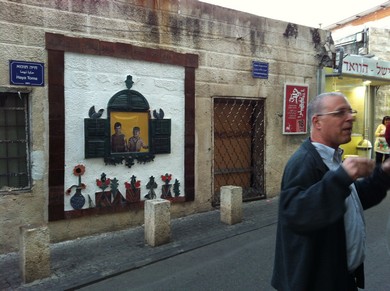 On Friday’s and Saturday’s in the month of December, the art of the neighborhood is promoted through walking tours put on by Ron and the Arab Jewish Cultural Center. The focus of the cultural center is to bridge gaps in the community among Arabs and Jews. "It’s easier to bring people together around art and culture and not debates," Ron said.It’s surprising how the impressive works of ceramic mosaics, sculptures and paintings can so easily be missed. The “Festivals of Festivals” provides an opportunity to highlight these important works of art. The tour begins at the center’s location on HaGefen Street. Lining the building are three, two-dimensional metal sculptures. On the crown of three metal domes that stand side by side are a cross, Star of David, and an Islamic crescent moon. The artwork is a metaphor for the goal of religious co-existence in Haifa."If you look for the differences you will see them immediately,” said Ron. “If you look for the similarities, you can see them too."Heading into the winding streets of Wadi Nisnas, children run in and out of apartment buildings and Christmas decorations make this neighborhood like any other. The prominence of the artwork is subtle at first. A turn of a corner and suddenly, what seems like an ordinary wrought iron fence is actually a sculpture, combining different metal-works and colors and an English sign reading “Peace & Love.” Themes of peace inspire most of the works throughout the outdoor gallery, although humor is also on display. In reference to the popular local drink “Café Afuch,” or “upside down coffee,” protruding from the roof of a building is an upside down tray complete with coffee pot, grinder and cups to share.One of the most famous artists of Wadi Nisans is Chaya Toma. The themes of her artwork often reflect on the conflict between Jews and Arabs. Toma’s personal history also greatly factors into her work. Toma, a Jewish woman, entered her second marriage to Dr. Emil Toma, an Arab-Israeli. Bringing with her a Jewish son from her first marriage, had to reconcile what it meant to be part of a mixed family, especially with the birth of Toma’s second son. In one of the final pieces leading out of Wadi Nisnas, Toma created a window with a picture of her two young sons, side by side and smiling. Toma’s works feature prominently in the neighborhood and were mostly installed during the second intifada. Her signature medium is ceramic wall sculptures with the main subject usually being an olive tree. The olive tree is a symbol with many meanings in the Mediterranean. The olive branch is a symbol of peace, but the tree also represents livelihood and business. It is a source of contestation in the ongoing conflict as orchards are cut down for arguments of defense. 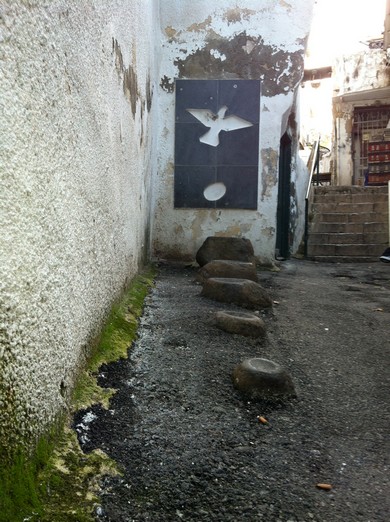 Other stand out pieces of art is the “Dove of Peace,” one of the first sculptures at the inception of the Festival in 1993. Contributed by a Druze artist from the Golan Heights, the outline of a ceramic dove on the wall of a building leads out to five stones, reducing in size. Each stone is said to represent countries in the Middle East with the smallest at the end representing Israel. The stones are hollowed on top, filling with water when it rains. For the artist, this is meant to symbolize that the rain from the sky doesn’t discriminate and it will give water to all.Often overlooked, Haifa is a curious municipal experiment that combines a rich history, diversity among religions and a modern international community. First settled in the mid 19th century by German immigrants, Haifa changed hands first under the reign of the Ottoman Empire and then the British Mandate of Palestine. It’s large bay and deep port have made it an invaluable resource in trade and the historically religious Mount Carmel rises above the city and adds to its mystique.The website for this December’s activities are here: http://www.haifahag.com/index.php?lang=en in Engish, Hebrew and Arabic.Follow @JPost_Lifestyle