By ORI J. LENKINSKI
OCTOBER 16, 2013 10:37
Castro Kids
(photo credit: courtesy)
Advertisement
If you think about it, children are the ultimate clothing consumers. They need endless spare T-shirts and pants to change into after spills, stains and accidents. Their stylists (aka parents) tend to love dressing them up in cute little outfits, and they grow so quickly that their wardrobes need to be updated almost every season.Although the children’s fashion scene is perhaps less glamorous and over-the-top than its adult counterpart, it is no less booming a business.This season, Israel welcomes two newcomers to the land of the little looks. Castro Kids and Lili and Tom are both local brands, but they are as different as can be. Castro is a big corporation with oodles of stores up and down the country, while the entirety of the Lili and Tom empire consists of two stores.Castro’s foray into children’s fashion marks an expansion of the company’s already-firm grip on the local retail market. To make this venture possible, Castro spent more than NIS 20 million, including a NIS 4m budget for television commercials.On the flip side, Eti and Udi Sayeg, the owners of Lili and Tom, do no marketing or advertising at all. The label has become a staple among Tel Aviv babies and children solely by word of mouth, and the Sayegs have no plans to change that in the near future.

Castro Kids Earlier this year at the Castro Fall/Winter Fashion Show, Etti Rotter, one of the four controlling shareholders of the Castro label, officially declared that a “little brother” of the company was about to be unveiled. A few days later, TV ads featuring members of the Artik Music School Rock Orchestra decked out in the brand new Castro Kids duds, hit the air. Within weeks, 24 stores were opened throughout the country featuring Castro’s take on cool kids.The line, which ranges from newborn to 14, keeps in step with the aesthetic that Castro has come to be known for. There are lots of prints, graphic T-shirts, colorful patterns and a ton of denim. In fact, the Castro designers were tasked with “downsizing” their adult line to suit children. As such, Castro Kids incorporates many of the trends that grown-ups will be wearing this fall, such as leopard, metallic and plaid.All the fabrics chosen for the children’s line were selected with comfort in mind. There are no heavy knits or clunky winter jackets, as Castro designs with the Israeli climate in mind. What the stores are filled with are the kinds of basics that parents never seem to have enough of at affordable prices.

Lili and Tom Taking a stroll through Habima on any given afternoon, one would think that the Sayegs were holding the reins of a major corporation. Nearly every other child is sporting an item from Lili and Tom, a huge accomplishment for such a young label.What has helped Lili and Tom catch fire is the label’s casual, laid-back aesthetic.Fitting in perfectly with the cotton T-shirts and baggy pants that are the calling card of Tel Aviv fashion, Lili and Tom offers cool casuals for children. 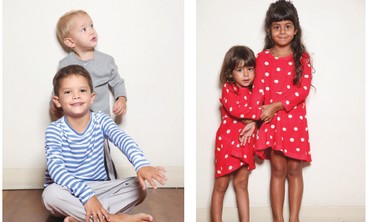 Lili and Tom (courtesy)The Sayegs are a married couple in their 40s, the parents of two teenage children.They share the creative side of the work completely, collaborating on all designs.Udi also handles production of the garments, while Eti attends to her other retail venture, Gallabia in Neveh Tzedek.There is a sophistication about Eti and Udi’s designs that is rare in their market.“We don’t want to make adult clothes in small sizes,” says Eti. “We focus on getting good fabrics and letting them guide us. I believe that if the materials are good, you don’t need to add too much to them.”Their staple garment is the striped T-shirt.It comes in many colors and sizes, from newborn to 14. When the Sayegs decided to embark upon this adventure, Eti knew that she wanted to base the label around a specific color scheme.“A lot of children’s clothes make it look like kids are living in a different world from us,” she says over an espresso at Delicatessen, next door to their Yehuda Halevy location. “There is so much pink and fuchsia in kids’ clothes. We wanted to create something a little less clueless. We knew right away that we wanted browns. Next to that, we added happy colors like bright blue and red.”The Sayegs’ vision for their stores includes accessories, playtime essentials and handmade toys. Both the Yehuda Halevy and the Shenkin Street locations are designed to create a burst of color in the midst of urban Tel Aviv. And though the feel of the label is upscale, the prices are surprisingly low.“It’s very important to us to be reasonable. We want to be accessible to everyone,” Udi says.“It’s such a dynamic business. We want to be the place that always has something new,” Eti elaborates. “We want to excite our customers by continuing to surprise them with the next thing.”
Advertisement
Subscribe for our daily newsletter