Similar but not matching

While Tel Aviv may be awash with fish restaurants,Derby Bar Port has its own cachet.

By YONI COHEN
Similar but not matching
(photo credit: Courtesy)
Advertisement
The Tel Aviv Port area is full of trendy restaurants and cool dance bars. So when a new restaurant opens up in what used to a huge club, it’s very exciting.That's exactly what happened recently when the Derby Bar Port fish restaurant opened in the venue that was once the legendary TLV nightclub. Architect Yaron Tal was tasked with designing the large new restaurant that can seat up to 250 diners at a time.Some NIS 6 million was invested in the project that enjoys a prime location right next to sea at the northern end of the port. Tal, who was also responsible for helping to design the much talked about Google Israel offices, made sure that every detail was well thought out. 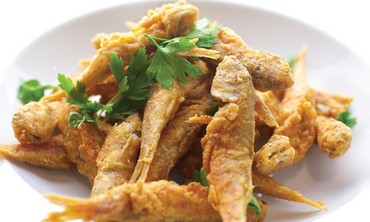 It’s a great place to sit and enjoy the sea in a modern, interesting setting (Courtesy)The end result is very impressive.Derby Bar Port is the latest addition to the successful Derby Bar chain that has restaurants around the city. They have been around for years and are known for using fresh, top-quality ingredients.My dining companion and I went to check out Derby Bar Port on a quiet mid-week evening. The restaurant was relatively empty, so we were able to sit pretty much wherever we wanted. Usually I would choose to sit outside in order to take advantage of the wonderful view and sea breeze, but it was quite a chilly evening so we decided to sit inside and look at the sea from afar.Before we even had a chance to sit down, our enthusiastic waiter began to bring us a selection of salads and dips that come with every main course. As well as the usual eggplant dips, tehina and chopped salad, there were some interesting pickled fish salads.Whenever we finished one of the small plates, our waiter made sure to bring a refill. While we could have easily filled up on the tasty salads, we made an executive decision to stop and leave room for the main course.I ordered the fillet of sea bass (NIS 115), which came with roasted potatoes. I was expecting the fish to be good quality and well cooked, and it was. What really impressed me, however, was the sauce. Full of garlic and butter and a mixture of herbs, it really complemented wthe flavorful fish. The roasted potatoes were also very impressive.My dining companion went for the mixed fish platter (NIS 95), which was comprised of smaller whole fish that had been coated in batter and fried. I personally didn't love it because I found it difficult to eat some of the fish with all the bones and head still attached.Having said that, the fish was tasty, and the batter was of good quality.The portion was huge, and even between the two of us we couldn't finish it.For dessert we chose malabi (NIS 40). A slightly fancier version of the popular Middle Eastern treat, it was surrounded with extra rosewater and topped with pistachios and dried coconut.We also had a creme brulee (NIS 40), even though we were pretty full by this point. It wasn't as special as the malabi, but it was good nonetheless.Overall, we enjoyed our visit to Derby Bar Port. It’s a great place to sit and enjoy the sea in a modern, interesting setting. In terms of the menu, it's not that different from similar Middle Eastern style fish restaurants in the city. However, the combination of ingredients and flavors, as well as the attention to detail, make it stand out from the crowd.The writer was a guest of the restaurant.Derby Bar Port
Not kosher 3
Hata'aruha, Tel Aviv Port
(03) 624-6050
Open every day from noon until the last customer leaves.
Advertisement
Subscribe for our daily newsletter