Soaking in the southern sun

The lack of pomp found in the larger hotels, with their expensive shops and grand receptions, makes for a refreshing and intimate environment.

By TAMARA ZIEVE
Sunset at the Leonardo Hotel Ashkelon’s pool
(photo credit: Courtesy)
Advertisement
Ashkelon’s Leonardo hotel is a medium-sized, friendly establishment located in a pretty neighborhood a stone’s throw away from the beach. The lack of pomp found in the larger hotels, with their expensive shops and grand receptions, makes for a refreshing and intimate environment. Our room on the ninth floor was clean, modern and thoroughly planned, leaving us wanting for nothing - except for toothpaste, which we had both forgotten, but quickly remedied with a two-minute walk to a nearby kiosk. The most notable feature of the room was it’s beautiful sea view, framed by a large glass door leading to a small balcony with a table and two chairs - lending to one of those strange moments where I suddenly wish I were a smoker in order to enhance my experience of the panorama. There were various luxuries dotted around the room, including a bowl of fruit, a box of chocolates, coffee and tea, and white bath robes and slippers left for each of us on the bed. The bathroom was also stocked with shampoo, conditioner, shower gel and other toiletries, to accompany a soak in the bathtub or a shower. The bed was comfortable, giving us a good night’s sleep, and faced an LCD TV. 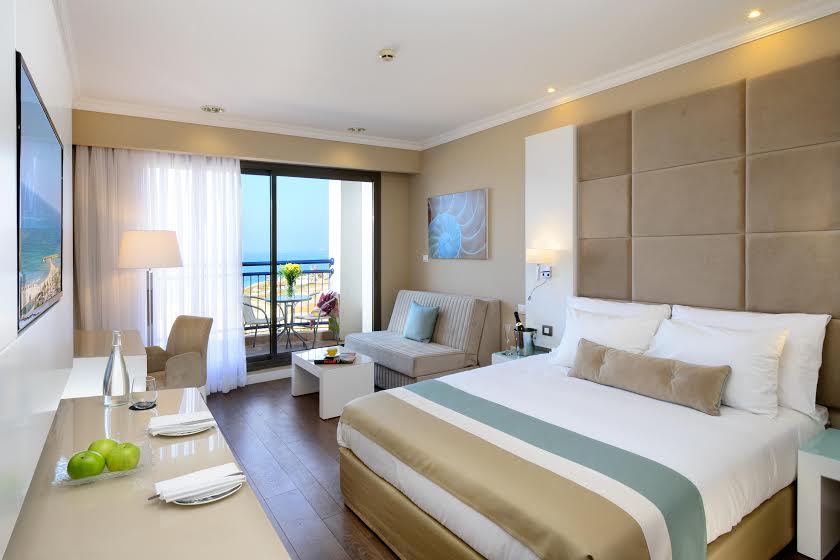 The swimming pool is complemented by the same coastal view seen from the rooms, and is lined with plenty of sun chairs and sunbeds. On the same floor is a large dining room where we had a buffet dinner and breakfast. A good spread of food was put on for both, offering an enjoyable, though not outstanding dining experience. For dinner there was a variety of salads to choose from, salmon, chicken, and plenty of vegetarian options including hummus, tehina, stuffed vine leaves, dim sum and antipasti. Dessert included fresh fruit and several different types of parve cake, which were as good as can be expected from parve dessert. For breakfast I chose how I wanted my eggs cooked and what type of coffee I wanted, before helping myself to a rich selection of cheeses, bread, pastries and salads. There was also a range of cereals, yogurts, fruits, cake, waffles and pancakes. After filling up on the buffet and relaxing by the pool, the only thing left to check out was the spa. I chose to have a hot-stones massage, and though it was my first time experiencing this type of massage, it certainly will not be my last. I felt fully pampered and relaxed after my Ukrainian-born masseuse Maya worked her magic during an hour-long treatment. Maya told me that the the team of hotel staff know each other well and feel like a family, and this was reflected in the friendly customer service that we received, from the check-in staff to our smiley waitress and the calm atmosphere created in the spa. We left the hotel feeling rejuvenated and content with our one-night stay at the Leonardo. The writer was a guest of the hotel. http://www.fattal.co.il/leonardo-ashkelon-hotel