No longer just a city you pass by on the way to Masada or the Dead Sea, Arad has undergone tremendous developments in recent years.

By ARIELLA AFLALO
DECEMBER 4, 2013 11:51
Southern comfort
(photo credit: ARIELLA AFLALO)
Advertisement
The name Arad is mentioned in the Torah in the Book of Numbers: “The king of Arad, who dwelt in the south” (chapter 21, verse 1). The modern city of Arad is located on the Kidod Ridge in the Judean Desert and is well known for its dry climate, which is considered to have properties that help cure a variety of diseases.Exactly one year ago, Arad celebrated its 50th birthday. Throughout the years, its population and tourist attractions have waxed and waned. The city blossomed culturally in the early 1990s when for four days and nights each summer, masses of young people flocked there for the music festival. The most popular singers and bands would play exciting Hebrew songs at venues across the city that ended with the sunrise on the slopes of Masada.However, July 1995 was the last time for many years that this festival took place, since that summer three teenagers were killed – trampled by crowds that had gathered to celebrate the rock group Mashina’s farewell performance.Fourteen years later, in 2009, city leaders decided to revive the festival.Arad residents note that in recent years a trend has begun in which people who grew up in Arad but left after high school are now moving back with their families, full of optimism and a desire to revive the city.Anna, the director of a local tourist agency, says that Arad is “kind of like a big kibbutz – everyone knows each other, and it’s a very nice and comfortable place to raise children.The cost of living is also much lower here than in the center of the country,” which also doesn’t hurt.Residents describe their city as a very friendly, warm and enveloping growing community that is flowing with innovative ideas In and near Arad, there are many hikes and activities to choose from. 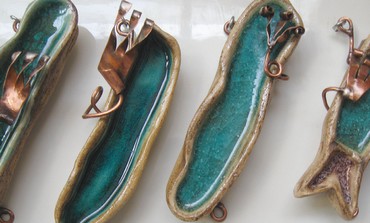 Artists Quarter – Studaika (Ariella Aflalo)
One of the newest areas of renewal in Arad is the Artists’ Quarter in the industrial zone.The studios were built in hangars that satabandoned for years until, in 2004, residents came up with the idea to bring in artists who would open and work in studios and galleries there. But the initiative was not overly successful, and the only artists who remain are Gideon Friedman, a talented artist who works with glass who displays spectacular works of art in his private gallery; and Miri Leibovitz and Edouard Shruster, who design commedia dell’arte style dolls and are the owners of the Doll Museum.Two years ago, in cooperation with the Tourism Ministry and the Negev Development Authority, city leaders began promoting the Artists’ Quarter again in an attempt to turn it into a cultural, art and community center. They also wanted to build an amphitheater in the quarter for performances and activities. Currently, the quarter is home to 15 artists who are showing their works in galleries and conduct workshops for visitors.The following are a few of the artists with galleries in the Artists’ Quarter: Yoni Gritzner and Adi Miroru are a young couple – he is a nature and still photographer, and she is a self-taught jeweler. One of her most unusual pieces is an earring that winds itself into the ear. Both of them work and exhibit their artwork on site and sell their products online. (Tel: 052-408-5577) Nofia Haviv-Galon’s life story is fascinating.At her gallery, Ma’ayan Hayetzira, she offers jewelry and other artworks, as well as ironwork created by her late husband, Shmulik Calderon. Haviv-Galon also offers art workshops on the premises. (Tel: (08) 995-0131) Rami Zamir designs Judaica made from locally found copper and stone, including mezuzot, candlesticks and hanukkiot. (Tel: 054-670-3723) Ido Levy-Adam operates a sewing studio called Ratz Midbar. He makes equipment and accessories for soldiers and hikers (such as camping mats and thermal blankets), as well as for jeeps and SUVs (such as compact and folding beds and kitchens). He also offers rescue services for hikers. (Tel: 050- 506-3186) Nora and Eran Finch operate a multidisciplinary workshop. They build wooden furniture and hold workshops where visitors can design a piece of furniture within two or three hours. In addition, Nora offers English lessons according to a unique method she developed. The temporary exhibitions they display in their gallery change often, they run a small café, and children and adults can often find workshops going on or movies being screened on Saturday mornings.(Tel: 054-465-0629) The Artists’ Quarter. Tel: (08) 995-1871.Sunday to Friday, 10:30 a.m. to 1:30 p.m. and 4 p.m. to 7 p.m. Some of the galleries are also open on Saturdays.
JEEP TOURS 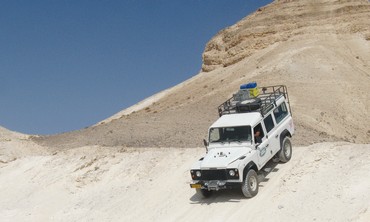 Giora Eldar’s Jeep tours (Ariella Aflalo)Giora Eldar grew up in Arad and has been offering jeep tours for many years in thedesert,which he knows like the back of his hand. He leads jeep tours through Nahal Shafan and Nahal Tzfira, where there is running water all year long. He also brings guests to the salt caves and to Mishor Amiaz and an outlook at the top of Mount Sdom.He leads tours through the area where the Zealots lived – a sect of people who lived on top of Masada and the desert area until the Romans conquered the area.The mountain and valley are named for these Zealots. There is also a cave named after them, which is not very well known, since it is extremely difficult to reach (you have to climb down the mountain using ropes). For adventurous climbers who are up to the challenge, the cave is full of beautiful stalactites. There are spectacular views of the valley and Masada from the top of the mountain. Eldar also offers rappelling excursions above Nahal Rahaf and overnights in the desert or in Beduin tents.Tiyulim B’rosh Aher, Tel: 052-397-1771. NIS 600 to NIS 1,100 for two- to four-hour trips for up to eight people in a jeep.
CAMELS AT BERESHIT 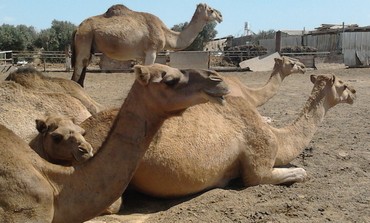 Camels at the Bereshit Ranch (Mickey Shem)There is a herd of affable camels at the Bereshit Ranch, three of which are young females. When one of them conceives, she is removed from the ranch and left alone to graze in the desert during the gestation period (380 days). Only after they give birth in the nature do the camels return to the ranch and begin the milking period, which is limited, since the camels produce only enough milk for the firstborn. As a result, the total amount that can be milked from camels is four liters a day, compared to up to 50 liters per day with cows. The ranch also carries out agricultural research. It turns out that camel milk is extremely healthy and can be used to produce medicine and cosmetics. Guests can hear lectures at the ranch’s visitor center, receive nutritional and naturopathic counseling and feed the camels and their calves. Coffee and herbal tea is served at the center, and guests can purchase products made from camel milk, including frozen milk. The camel milk can also be ordered for home delivery.Bereshit Ranch, between Tel Arad and Kseifa intersections (Road 31). Tel: 077-556- 0212. www.camels-milk.com. Tours are free of charge and by appointment only.
PLACES TO EAT Mar’eh Bamidbar, Artists’ Quarter – There is a multidisciplinary complex that covers two hangars and comprises a museum, a gallery, art workshops, chi kong and yoga, a Moroccan-style rest area, as well as a variety of spaces for overnight camping. To accommodate all the visitors who are drawn by the above, a food court called Midbariyah was created. The ecological garden is covered with multicolored bougainvillea, there is a vegetable garden, and free-range chickens wander around the complex. The eggs they lay are used to prepare the meals.The restaurant is owned and run by artists Avital and Alon Aharoni. Their specialty is a festive meal that includes a variety of meats and wines or a meal of colorful root vegetables such as beets stuffed with creamed quinoa, kohlrabi puree and Jerusalem- style potato puree, purple potatoes, steamed carrots and acorn squash filled with vanilla cream.(Tel: 054-439-6824. www.desertvision.org)Midbar Winery, Artists’ Quarter – Meital Damari, the youngest vintner in Israel, produces a very fine wine. This boutique winery produces 14 types of wine, including a unique orange wine and organic grape juice made from grapes grown on Mount Amasa. In addition to tours of the winery, the manager Oren Amit also operates a wine bar that also offers light meals. Jazz,blues and flamenco concerts are held on the weekends, and for NIS 50 you can drink as much as you like on Friday evenings. Tours and wine tastings cost NIS 25. (Tel: 050- 666-2490.) Muza – One of the most veteran entertainment and culinary institutions in Arad functions as a restaurant during the day and as an English pub in the evenings. Its walls and ceiling are decorated with hundreds of scarves and flags from dozens of soccer clubs around the world. The menu includes grilled meat, stews, soups and pastas. The bar offers 30 types of whiskeys, seven types of beer on tap and a barman who knows how to prepare a wide selection of cocktails.Sports enthusiasts will be happy to know that important games are shown on big-screen TVs. Intimate rock concerts are also held there from time to time. (Tel: (08) 997-5555) 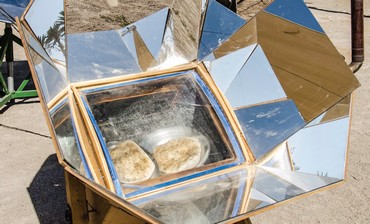 ACCOMMODATIONKfar Hanokdim – Along the road between Arad and Masada, Kfar Hanokdim at first seems like a mirage. The palm trees and other trees in the orchards sway in the pleasant desert wind, groups of camels, donkeys and peacocks roam around freely on the grounds, hares bounce around the courtyard that is surrounded by guest houses with colorful balconies, black wool tents, huts covered with palm branches and infinite beauty.The furniture is constructed from logs, the light fixtures are made of salt, and desert rocks cover the walls. The place is extremely clean and well maintained. Kfar Hanokdim is a true oasis that aims to create the atmosphere of hospitality of long ago, including an Arabian Nights style Beduin tent with ottomans and pillows, where you can hang out and smoke nargilas, hammocks, low tables to sit around drinking coffee or play backgammon. There is no TV or cell-phone reception. This is a place where you can completely disconnect from the daily grind and connect to nature, the desert and the quiet.During the day, you can relax on the hammocks or take a yoga class or an ecology and recycling workshop. You can prepare meals in the kitchens or order a Beduin meal of makluba and salads. During Hanukka, there are candle lighting ceremonies, sufganiyot and drum workshops.Kfar Hanokdim (9 km. east of Arad) Tel: (08) 995-0097. For more information, check on the website: www.gonegev.co.il. Workshops cost NIS 45. Overnights begin at NIS 80 for adults and NIS 70 for children. 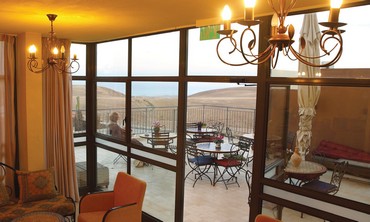 Yahelim Hotel (Tal Glick)
Yahelim Hotel – The Yahelim Boutique Hotel overlooks the desert and the Dead Sea and has a calm atmosphere. The owners, Gali and Gili Sofer, provide drop-offs and pick-ups from the starting points of many hiking trails in the area. The hotel underwent renovations last year, during which its lobby was expanded and work on five extra rooms was begun. The 10 rooms that are currently in use are spacious and elegantly designed with desert colors. Some have a Jacuzzi, and others a porch where you can rest and watch the sunset. One has an outside Jacuzzi. Every morning, there is an abundant breakfast.NIS 700 to NIS 1,200 per night. (Tel: 077- 563-2806) Translated by Hannah Hochner
Advertisement
Subscribe for our daily newsletter