By TOM LANGFORD
Venice 311
(photo credit: Arthur Wolak)
Advertisement
Tom Langford is a commercial photographer, professional retoucher, and a website designer.Photography is so much fun and is a wonderfully satisfying pursuit, especially when you understand how to take Good Pictures. Unfortunately as you progress you will become more frustrated as you better appreciate how few pictures are really successful.Great pictures succeed because they tell a story in a way that no other art form can match. They not only capture the moment, they capture the right moment that brings a photograph to life.I was very impressed by this picture and the detailed analysis that Mel Raab sent to me. It shows just how difficult it can be to take a perfect shot even when it’s right in front of you. 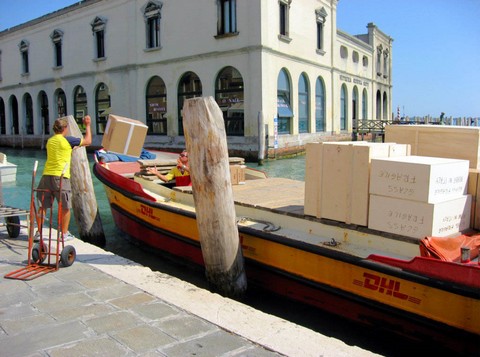 Murano Italy (Mel Raab)
He took this on holiday in Italy on Murano, an island off of Venice where they long ago placed the glassworks so as to not burn Venice itself down in case of work accident. "Everything manufactured on Murano is fragile. So imagine my surprise when I saw the DHL barge being loaded with one toss of a box after another.  I felt I had to capture the unexpected," he explains. Mel shows one of the first characteristics of a good photographer: He spotted a great story-telling opportunity – fragile glass and DHL thrown boxes. Juxtaposition is a powerful method of creating impressive photojournalistic pictures. “The trouble was, as soon as my camera came out, the workers stopped and scowled.  It was clear they didn't like being caught taking shortcuts," he explains. "From the way they were looking around, it also wasn't clear if they had friends on shore who were going to enforce their desire for us to be gone. I felt it best to not antagonize them.”We all face this situation at one time or another but Mel showed the second characteristic of a good photographer – resourcefulness: “I asked my wife to stand an equivalent distance away and focused on her.” By half-pressing the shutter button he locked the focus, then turned around and quickly took a shot.“As I fiddled with the camera, the number of boxes on shore quickly diminished. I took this shot when the last box was tossed aboard. I felt so elated at my timing; I felt I had caught a fun photo that juxtaposed the fragility of glass with the tender care of a teamster,” Mel says. “Only it didn't work out that way when I got home. I showed this photo to people and found they didn't know what they were looking at; they didn't know what was going on." Mel disappointingly explains. "The action was in the distance. The markings indicating fragility were on the other side of a pier, on crates rather than a similar box, and with low contrast. The flying box wasn't differentiated well from the background.”Mel is not alone in finding it difficult to stand back and see his picture as other see it. I’m impressed, however, with this analysis. If you don’t take the trouble to discover why a picture doesn't work, you’ll never understand how to take pictures that do work.He has since tried enhancing the picture and cropping it “to pull out more cues” but finds that any changes just make it less informative, less interesting, and less compelling. This tenacity is a quality that photographers need if they are ever to succeed in creating interesting shots. Constructive criticismMy method of constructive criticism consists of answering the three simple questions. We’ll practice it on this picture but our aim is not hindsight. We need to be able to use it on the spot, before we take a picture, as we take the picture and as we check the result on the preview screen:What works?This is a pleasant enough picture of an exotic location.What does not work?The focal point is a large central pole but this clearly can’t be why the picture was taken. A gondola would draw my attention but this mundane barge doesn’t. The buildings are interesting but can’t be the subject. I feel the workmen could be the focal point but the large pole that obscures one of them draws my attention away.Could it be improved, and how?The photographer could have moved a few steps to the left to separate the workmen from the pole, and moved closer to emphasize the throwing action.This critique shows just how far removed the picture is from the photographer’s intention. There is no mention of fragile glass, DHL, or throwing, hence no effective juxtaposition.Capturing the momentIs there anything that could have been done to tell the story that is missing? One solution would have been feign interest in something else, then turn away and drop the camera to your side but still pointing at the workmen. Gentle pressure on the shutter button would lock the focus on them. You could then quickly move to a position with some boxes between yourself and the workmen, especially if they had the “Glass Fragile” words in view.As you lift the camera to eye level you fully press the shutter button while it briefly points at the workmen, then turn it to take a few shots away from them. If the camera was in kept burst mode, say three frames per second, you would have a few shots of the men with close-ups of the “Glass Fragile” boxes.Here’s the shot retouched to show an idealized version. 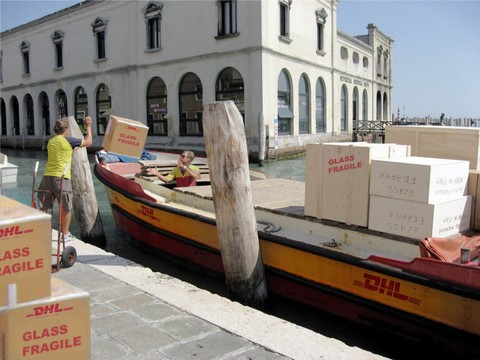 Murano Italy (Mel Raab)
Methods of candid photography are too difficult to think up and carry out on the spot so need to be well practiced beforehand. The odds are that you would still not have a successful picture, but this is par for the course. Occasionally you will catch a gem that makes it all worthwhile.Frustration is a photographer’s friend. It makes us more determined to get the shot next time and do whatever it takes. I sense in Mel’s detailed description and analysis that next time he will be more prepared: “I can tell you I have a new appreciation for photos from Weegee and from photojournalists who catch action in the moment in an unambiguous way,” he explains. If you are aspiring to develop your photography skills, send me a picture and I will publish one at the end of my next article with some constructive feedback.  Send one picture only, at a reduced size to [email protected]Tom teaches photography courses for beginners and advanced. Details of his courses and field trips at: www.langford.co.il/courses/
Advertisement
Subscribe for our daily newsletter