The Jerusalem of their youth

Isaac Molho and author Amos Oz were among the recipients of Honorary Fellowships of the Israel Museum on Monday.

By GREER FAY CASHMAN
MAY 14, 2010 20:47
amos oz 298.88
(photo credit: Courtesy)
Advertisement
TWO NATIVE Jerusalemites – prominent lawyer Isaac Molho and prize winning internationally acclaimed author Amos Oz – were among the recipients of Honorary Fellowships of the Israel Museum at a wind-blown event on Monday night that had all the guests shivering with cold. The ceremony was held outdoors in a section of the museum campus that is still high enough to overlook the city without having any towering structure eliminatethat obstructs the view. The scene reminded both men of their youth when the area was a barren hill with an oak tree around which youth groups used to gather and where, according to Oz, many of the young people of Jerusalem experienced their first romantic moments. Molho, a fifth-generation Jerusalemite whose great-grandfather, grandfather and father were all involved in the development of the city and made honorary citizens, is currently chairman of the board of the museum. He is also a special envoy for Prime Minister Binyamin Netanyahu. Oz, who is an Israel laureate and the recipient of a string of honorary doctorates from universities in Israel and abroad, observed that the museum, like Israel, was born out of a dream. Relating specifically to Israel, he noted that dreams are sweetest when still unrealized. Once they come true, they are often accompanied by a little disappointment. “The moment a dream is fulfilled,” he said, “it is destined to be slightly disappointing.” But he hastened to point out that disappointment does not obviate love. “I love Israel when there are times that I do not like it, and even at times when I cannot stand it.” LATER IN the week, at the Bible Lands Museum veteran sportscaster Danny Neuman was among the recipients of the My Jerusalem award in recognition of the enormous contribution he has made to sports in the capital. Born in Jerusalem in 1955, he began to play soccer with the Betar youth team when he was 13, and after a little over two years joined the main team and played for many years. When he stopped playing he became a sportscaster and commentator on Israel Radio, with his intimate knowledge of soccer adding color to his reports of matches, and subsequently became a sportscaster and commentator on Channel One. He is now preparing to go to South Africa to report on the World Cup.CELEBRITIES FROM stage, screen, academia and philanthropy are currently contributing to the occupancy rates of the capital’s major hotels and will keep on doing so for some months to come, despite the new global economic downturn. 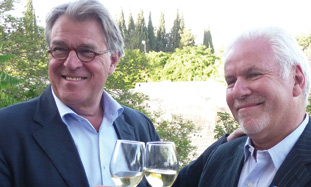