From hell to (humous) ‘Paradise’

3 Darfur refugees put a spin on our favorite dish.

By BEN HARTMAN
JULY 2, 2010 16:11
humous gan eden 311
(photo credit: Ben Hartman)
Advertisement
If there is no better way to a man’s heart than through his stomach, there’s arguably no better way to reach the hearts of Israeli men (and women) than through their beloved humous. Following that adage, three Sudanese refugees from Darfur opened a humous restaurant on Rehov Allenby in the heart of Tel Aviv nearly two months ago, serving the most Israeli of dishes in one of the most quintessentially Tel Aviv corners of town.Hassan, Muhi and Adam opened the restaurant after learning the humous trade at “Humous Meshusha,” one of the well-loved humous joints in the city, on the corner of Bograshov and Pinsker streets in Tel Aviv. Three months ago, the three refugees, all in their late twenties and early thirties and all from the war-torn region of western Sudan, pooled their savings and began renovating the former site of a nightclub on the corner of Allenby and Yona Hanavi. Friends and confidants from across Tel Aviv’s Darfurian community lent a hand in the renovations and about a month later, “Humous Gan Eden” (Paradise Humous) was born.Hassan, a towering, 29-year-old Darfurian who arrived in Israel about three years ago, admits that humous isn’t a mainstay of Sudanese cuisine, though it is eaten often during Ramadan.“In Sudan we eat humous, but not really like this,” he said. “We eat ful (cooked and mashed fava beans) like Israelis eat humous. We eat big bowls of ful, with olive oil, eggs, sometimes cheese; some people even add sugar to it.” The three refugees-turned-restaurateurs put their own spin on Israel’s favorite dish, 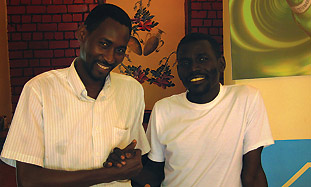 serving their humous, all of which is made daily inside the restaurant, with fresh chopped tomatoes, a healthy dollop of Sudanese ful, and the requisite hard-boiled egg, olive oil  and tehina, all of it arranged with an artful presentation lacking at most humous joints in Israel.Their Sudanese ful plate hits a little closer to home for the three refugees, and features a humous-size portion of the creamy fava beans, covered in onions and grated feta cheese and a shredded hard-boiled egg. Garnished with tomatoes and sopped up with a pita, the dish is evocative of Tex-Mex bean, cheese and egg breakfast tacos – albeit thrown down in a restaurant with a very Tel Aviv vibe.Also somewhat foreign to Tel Aviv, the restaurant’s menu is rather affordable, with a full humous plate running NIS 17, “Special Humous Darfur” for NIS 20, large salads for NIS 15, a pint of draught beer NIS 13, coffee and tea for NIS 4, and chilled shots of arak for only NIS 8.Hassan said they plan on adding more Sudanese offerings in the future, including “Aseeda,” a sort of porridge made with wheat flour or corn; and, hopefully, if they can get kosher certification, a number of meat dishes, as the local Sudanese cuisine is heavy on beef.Though the Israeli media are rife with horror stories of refugees who have suffered abuse or mistreatment in Israel, Hassan, Muhi and Adam all described a place that has taken them in and treated them like one of its own.“Israel is great because I’m happy here,” Muhi said, adding, “I’m proud of Israel because it treated me like their child, like their son. They protected me, they helped me, treated me very nice, so I can never forget this.” Muhi’s sentiments were echoed by Hassan, who described the protection he received in Israel after the suffering he endured in Darfur. Hassan was born in the village of Bulbul outside Darfur’s main city Niera, where he lived with his family until the Janjaweed raided the area in May 2007.“They came one morning about 4 a.m. with a lot of people and horses and they surrounded the village and started shooting everywhere and burning the houses,” he said. Hassan said he and his two brothers hid under some reeds in one of the rooms of their family home while the raid was taking place. After the Janjaweed left, Hassan said he and his brothers came out of their hiding place, only to find that their parents had been burned alive in a fire that raged through an adjacent room of the house.It was then that Hassan decided to flee, making his way to Khartoum and then Cairo, before setting off for Israel with a group of refugees from Darfur.Muhi, who is 33 years old and lives in Tel Aviv with his wife and two kids, came to Israel after fleeing the Sudanese capital of Khartoum after government agents began combing the city for Darfurians on the run. Muhi and his family had fled to the capital after his village was attacked and his brother killed, and left the big city when the situation became too dangerous. They later fled to Cairo, where they lived for 18 months until Muhi decided, with his wife’s blessing, to set off with a group of Sudanese fleeing to Israel, telling his then pregnant wife that if he made it there alive, he would contact her and tell her to come along.Muhi said he had heard of the terrible trials that refugees face trying to cross the Sinai into Israel, and did not want his wife to attempt the journey while she was pregnant.“I knew nothing about Israel then, but I had friends who were going to Israel and others who were already there, so I went. When I got to Israel, I was in prison for about five or six months and lost all connection to my wife, who thought I had been killed. “After I was released from prison, I called my wife in Egypt and I told her I was out of prison and she decided to come with the children and a large group of Darfur refugees who were led by smugglers. Three months later I was reunited with my family in Israel.”

The third proprietor, Adam, spends most days at his full-time job at ametal factory in Azur, and comes to the restaurant to help out onFridays and Saturdays. Adam also fled the fighting in Darfur, where theJanjaweed turned his village into smoldering ash.Adam said he had heard that Israel was a place of warfare and fighting,but when he came here, things were not as he was told, and shortlyafter arriving he was given permanent resident status. He expressed hishope that the rest of the refugees from Darfur in Israel would be giventhe same status, and that Israel would have friendly relations “withDarfur, not with Sudan.” The restaurant’s main waitress, Nasrin, met the three refugees when shewas waiting tables at Humous Meshusha, where she worked with them forthree years. A 29-year-old Israeli-Arab from Jaffa, Nasrin agreed thatthe makeup of the restaurant’s wait staff and ownership is a bit unique.“Yes, it’s very United Colors of Benetton here. I get a kick out of it.” Nasrin, who is also the namesake of the restaurant’s Nasrin salad –chopped Arabic salad with chickpeas, tehina, lemon, olive oil, sumacand cumin – said that while working at the restaurant and through herfriendship with the three men, she had gotten to know the Darfuriancommunity in Israel, if only to a small extent.“One of the great things about knowing them and working here is thatI’ve managed to meet a lot of the crowd and the community. They reallyhelp each other out; one did the painting [of the restaurant], othershelped with the moving; it’s really like one giant family.” All three of the men are among the relatively few refugees givenpermanent resident status and a blue national ID card by the governmentthough they do not hold Israeli citizenship.Though they speak very warmly of their time in Israel and describebeing part of a supportive community, it is clear that in a perfectworld, the three men would go back to Darfur in a heartbeat.“Of course I dream of it, because I have many family and many friendsthere. Some of them have been killed, I don’t know how many. Buthopefully, some day, I will be able to go back,” Muhi said.“I dream that some day, the fighting will be over and I will be able togo back there, because it is my country, my family, my culture. Andsomeday, maybe Israelis can come to Darfur too,” Hassan added.