An exhibition at the Petah Tikva Museum of Art looks at the intricate historical tapestry of the city of Lod.

By AKIN AJAYI
FEBRUARY 12, 2010 19:03
georges church 311
(photo credit: Dvora Orbach)
Advertisement
"I see ‘Georgiopolis’ as a metaphor, a consideration of the possibilities for a genuine social multiculturalism in Israel,” Dor Guez says. He is standing in the middle of the centerpiece of his eponymous exhibition, a large hall framed by 10 photographs of the ruins of the city that is today called Lod, but before was known as Lydd, and even further back as Georgiopolis – the city of St. George. This is the starting point for his one-man exhibition currently running at the Petah Tikva Museum of Art.The photographs, collectively titled “The Ruins of Lydd,” have a subtly contemplative aspect, at once both dramatic and melancholic. Set against a nocturnal skyline, the emphasis of light and dark presents the ruins of the city in an almost heroic presence. It is only when the viewer notes, in one photograph, a modern housing estate looming in the background, that one appreciates the essential anonymity of these once proud monuments – and of the people who constructed them – subsumed by the passage of time and the prevailing narrative. It is a comment on the city’s intricate and ethnically mixed historical tapestry, one replaced by a narrative that places Lod as a economically depressed “mixed” city which is often associated with crime and deprivation. “There is ignorance both within and outside the city to its rich history,” Guez argues, noting the contradiction that while the city has been earmarked for acknowledgment as a World Heritage Site by UNESCO, its historical antecedents domestically remain largely unknown. Through the photographs and the exhibition as a whole, Guez attempts to redraw the paradigm by using observation and personal voices to recreate the notion of identity, but without the restriction of political interpretation.“Georgiopolis,” according to the exhibition’s catalogue, proposes “scrutiny of the Christian-Arab minority in Israel, a reference group which has not… been granted profound perusal as a differentiated ethnic group in the local cultural field.” Within the rigid matrix of political identity that prevails today, this minority population 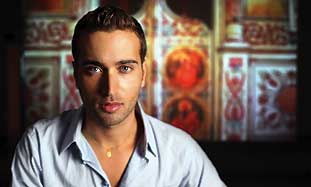 is treated as something of an anomaly, personal and social identity either shoehorned into the dominant characterizations or overlooked altogether. THE EXHIBITION focuses on the Monayers, three generations of a family whose personal narrative is intimately entwined with the history of the city. The starting point is 1948, when the city was conquered by the Hagana, and most of the Arab population – Christians and Muslims – were forced to leave. It uses photography, video and audio to explore the social history of one family, detailing the cultural, religious, ethnic and historical intersections that inform a multicultural, multilingual existence.“Untitled” (St. George’s Church), the two-channel video installation framed by the photographs – artfully, after the style of a church’s nave – prompts consideration of the contradictions between political and personal identity. In the first video channel, a Greek Orthodox priest delivers a sermon, in Lod’s St. George’s Cathedral, in Greek; an interpreter stands beside him, translating simultaneously into Arabic, the language spoken by the congregation. The incongruity of the moment illustrates the intercultural tensions that are prompted by a rigid, even doctrinaire appreciation of the personal identity of Lod’s Christian community. The moment is underscored by the audio track, a lilting, understated rotation of notes played on an oud; it serves, according to the artist, as a marker for the act of translation from Greek into Arabic, but also a reminder that within the solemnity of a Greek Orthodox mass, music is forbidden – again, a disconnect between an institution and the people that it serves.This disconnect is explored further in four short documentary videos, which are interviews with members of the three generations of the Monayer family. The videos attempt to use personal experience to “brush against the grain” – a quote of the essayist and German-Jewish philosopher Walter Benjamin, and appropriated by Guez to explain his use of art as a tool to extract untold narratives from political discourse. The first video, “July 13,” concentrates on family patriarch Jacob Monayer, as he describes the day in 1948 when the Arab population – save the small minority that sought sanctuary within the confines of what became, for a while, an ethnic ghetto – were driven from the city, and the experience of subsequently discovering afterwards how his personal and social history had been, in effect, erased. The second, “Subaru-Mercedes,” presents the four Monayer brothers born after 1948 in Lod. On and off screen, they argue about the precise definitions of their identities: Christian, Arab, Israeli, Palestinian. None come up with a suitable formula that encompasses their identity succinctly and accurately; as individuals, one appreciates that the truth can only be understood as a hybrid of all the contributory factors, a genuine pluralism which nonetheless struggles to find a means to express itself as such between competing political super-impositions.Perhaps the most poignant expressions of this conflict are uncovered in the last two videos, “Dear Jennifer” and “(Sa)Mira,” which feature members of the third generation of the Monayer family. In the first, the subject reads and re-reads a short letter that she had received from her instructor on a reflexology course. She had passed the course with merit, but the letter concentrates on the instructor’s surprise in realizing that she is an “Arab.” The content is well meaning – the instructor writes about how Jennifer is “a special person…(how) you of all people would do a great service to your people,” – but at the same time reduces Jennifer’s achievement to the narrow context of her perceived ethnic identity. “(Sa)Mira” is equally affecting: Blonde and blue-eyed, she lives in Jerusalem, studying at the Hebrew University and working part time as a waitress in the German Colony. Her employer summons her for a “friendly” chat, to tell her that three customers had complained when they realized that they had been served by an “Arab,” a fact that only became apparent when they received their bill with her name on it; it may be better, she suggests, if she Hebraizes her name at work to “Mira.” Her matter-of-fact narration of the anecdote intensifies the pathos of the experience: In one moment, she is converted from an individual to an “Arab,” with all the presumptions that the political hierarchy of the country creates.WHILE “GEORGIOPOLIS” as a whole is concerned with the challenging topic of nationality and identity in Israel, it is not an exercise in willfully provocative rhetoric. Rather, the obvious intimacy which Guez forms with his subjects emphasizes, subtly, a more important point: The possibility to consider identity as a social, rather than political construct, and the need to engage with an individual without the constrictions imposed by the narrow aperture of political discourse. As Guez puts it, “The strategy [of the exhibition] is the rejection of the binary, categorizing definitions which are incongruent with the dwellers of Georgiopolis.” There is a need to peer behind the veil, one might say.Guez – currently researching his doctoral thesis at Tel Aviv University on the subject of “the image of the new Jew,” using archival photography of Oriental Jews from the early days of the State of Israel as his starting point – suggests that the Petah Tikva Museum of Art has taken up an important civic responsibility by giving space and prominence to his exhibition. “It is the first time that an Israeli museum has given a marginalized community a voice,” he says.  Drorit Gur Arie, the Museum’s director – and curator of “Georgiopolis” – concurs.“It is an attempt to offer a new perspective on the relationshipbetween East and West, periphery and center, and as part of themulticultural agenda we strive to promote in the Israeli art andcultural milieus,” she explains.Which prompts the question, what can the viewer take from the exhibition? Guez is forthright. “I would like Israel to be a genuinely multicultural society. Genuine, and with a mutual respect between groups,” he says.
“Georgiopolis,” Petah Tikva Museum of Art, until February 20, 2010.
Advertisement
Subscribe for our daily newsletter