Norman Cohen’s fall from grace sounds like the theme of a Hollywood movie, but it looks like he’s climbing back up again; Meanwhile, he’s wowing passersby with his music.

By JPOST.COM STAFF
MAY 7, 2010 16:36
Blues Doc 311
(photo credit: MAURICE PICOW)
Advertisement
Meet Norman Cohen, a 60-year-old guy who supports himself by playing blues and rock music on the streets in Tel Aviv and who no one would guess used to be a prominent physician in Florida. Known simply as Norm or The Blues Doc to his many friends and acquaintances, Cohen was a board-certified gynecologist and obstetrician who later became a nationally and internationally recognized specialist and teacher in the field of clinic-based cosmetic procedures, particularly dealing with varicose veins. He had his own clinic in the city of Jacksonville, Florida, as well as all the comforts that a person of his profession usually provides for himself and family, including a home in an upscale neighborhood, nice cars, a boat and a vacation cottage near Daytona Beach. All this is gone now, following a reversal of fortune that would rival the theme of a Hollywood movie. “I thought that I might be able to change my life by making aliya to Israel,” Cohen said recently while setting up to play in the park off the corner of Rothschild and Sheinkin streets, one of his favorite “concert” locations. “I want to turn my life around here, including getting my medical license back – which would enable me to not only make a decent living, but a contribution to the country as well. “I have spent an excessive amount of money that I needed to live on in order to resolve an issue dealing with my medical license with the Florida Medical Board. I really wish to restore my dignity and empower myself.” Cohen’s guitar playing is an art in itself. He began playing as a hobby in his teens; and had he pursued a musical career instead of studying to be doctor, he might have made it big in America’s tough and challenging entertainment world. 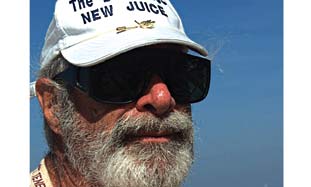 “I play mostly music from the ‘60s and early to mid ‘70s including all kinds of blues, soul music and classic rock and roll,” he says. His musical repertoire includes songs by Elvis, Jimi Hendrix, Eric Clapton and also many of the famous blues artists like BB King, whom he once met. He demonstrated his playing ability by going into one of BB’s most famous numbers, “The Thrill is Gone,” before a gathering crowd who began to toss coins into a wicker basket that he places in front of him for that purpose. “I can make enough money to survive on by playing on the street, but I have a lot of health problems that prevent me from playing for more than a few hours a day. The weather is also a big factor – especially in the winter,” he says. Tel Aviv, like many other cities in Israel, has no shortage of street musicians, especially those hailing from the former Soviet Union. But Cohen is truly unique, and his bantering with the people who stop to hear him play and sing make him a truly colorful part of the Non-Stop City. “I started playing earnestly when I was 15, and reached a level that gave me good part-time money for personal expenses. Later, in college and medical school, I helped pay my tuition by playing for campus events in a small rock group. This is how I got so interested in blues and rock music, which require a certain amount of guitar improvising, such as by Hendrix and BB King. I have a good synthesizer that makes great background music, so it sounds like I am being accompanied by several other instruments, including keyboard pianos, rhythm guitars, drums and electric base. “I'm a genuine ‘one-man band,’” Cohen smiles.It's now late morning, and Norm's playing picks up its tempo while Tel Avivians continue to pass by. A little girl of about four or five approaches The Blues Doc timidly and pitches a shekel coin her mother gave her into his basket. “I used a hat for a while instead of a basket, and always wore a baseball cap. One day, a little boy ran up to me and threw NIS 3 on my head. It took me by surprise, but after a few seconds, I started to laugh. I looked at his mother – who obviously had told him to put the money in my hat – and said I guess he got the wrong hat. She laughed also,”  Cohen recalled.In addition to his street playing, Cohen has also played some gigs in Tel Aviv pubs, including the Buzz Stop (near Mike's Place), the Dancing Camel Brewery and the Derrier Bar. He has also played for private parties in and around the Tel Aviv Metro area. Cohen recounts his fall from grace in a book he has written about his tribulations entitled The Botox Bandit, in which he relates how he lost his medical practice by becoming involved with a number of other American doctors in acquiring and dispensing a form of the Botox cosmetic drug that was not authorized by US medical authorities. “Nobody was hurt by these ‘Botox’ injections, but state and federal authorities cracked down nationwide on the doctors who were sold this medication by a company that openly lied and misrepresented themselves to me and over 250 other physicians,” he said, sadly.This setback started a sequence of events that ultimately made Cohen decide to start a new life in Israel. He arrived in early 2007.Now divorced, Cohen has two daughters who live in the US and have visited him in Israel. His ex-wife also came here briefly. None of his family members appear to have any plans to live here; and he has no relatives living in Israel. His efforts to obtain a license to practice medicine in Israel have been hampered by his being unable to produce a valid medical practitioner's license from the US.“When I first applied for my license here, I could not produce the letter of good standing from Florida. The Health Ministry refused to let me appear in person to explain my license situation in Florida;  and a lawyer I hired to assist me took a lot of money for his ‘services’ and did nothing. These circumstances put me on the street – and until I can get a license to practice medicine in Israel, I guess I will continue to perform this way, even though some people feel it is humiliating.”  When I contacted the Florida Department of Health in order to determine Dr. Cohen’s status regarding his medical license in the US, DOH deputy press secretary Eulinda Smith told me that after he pays the required fines and other due payments, Cohen’s medical license will be considered reactivated and he will be able to practice medicine in that state as long as he does so “under the conditions specified by the licensing board or department.”

After settling with the health authorities in Florida, Cohen didreceive the letter he needed; and he has now submitted it to the HealthMinistry in Jerusalem. The remaining question is how theministry will consider his current situation, including hisdeteriorating health as a result of suffering another heart attackafter making aliya. He also has problems with his legs and spine. “Inow only have 50 percent of normal heart function and might be forcedone day to have a heart transplant,” Cohen said. The only otherpossibility is a new treatment involving using stem cells to regeneratedamaged heart tissue. But that treatment is not available via thehealth funds and has to be done privately abroad, costing aconsiderable amount of money. “My heart condition is my most serioushealth issue,” Cohen said. “The other ones, including a degeneratingspine, will just have to wait.” Asked what he would like to doif he is granted a license to practice medicine here, he saidenthusiastically: “I want to be a consultant and help train youngdoctors in the field of treating problematic varicose veins and “spiderlegs” (severe varicose veins that give an unattractive “spider’s web”appearance). I know I'm really too old to practice medicine full time;but as a consultant and teacher, I hope to make a positive contributionto this specialized field of medicine in Israel."Cohen has a website – www.helpdrcohen.com– which goes into detail about his health situation, including a linkdealing with stem cell treatments, which are still largely anexperimental treatment option. His autobiography and some of his musicrenditions are also included. Those wishing to see The BluesDoc perform live will have an opportunity to do so tomorrow, May 8,when he and other local artists will be featured at a special blues androck music evening at the Dancing Camel, 12 Hata’asiya Street, TelAviv, off Hamasger and Derech Petah Tikva streets.  Anyonehearing his music and seeing how he communicates with people who take afew moments to see and hear him play can see that The Blues Doc is awelcome part of Tel Aviv’s cultural scene. Hopefully, he will deal withhis health and other issues and find a way to restore some of thedignity he once had. But if music is his best way to make a positive contribution in this country, the Blues Doc is definitely accomplishing this.
Advertisement
Subscribe for our daily newsletter