A message for the generations 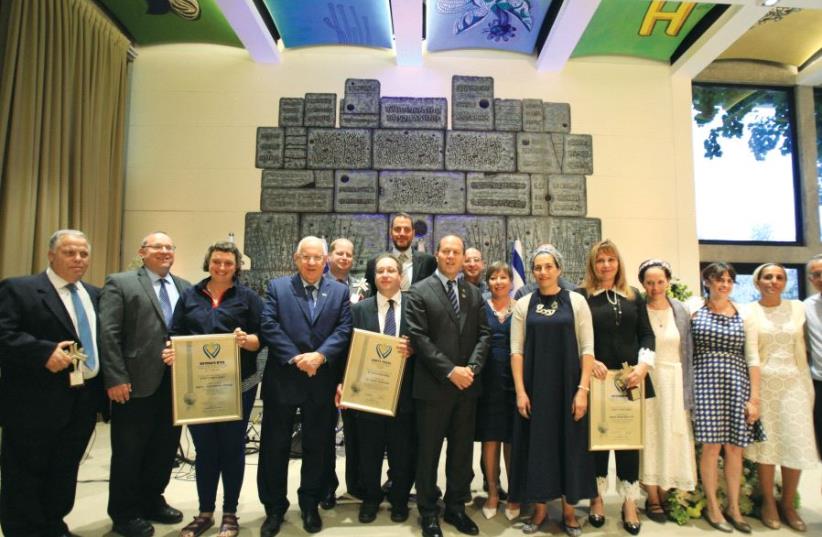 Jerusalem Unity Prize
(photo credit: EVYATAR NISSAN)
Advertisement
In his closing remarks at the 2017 presentation ceremony for the Jerusalem Unity Prize in Memory of Naftali, Gil-ad and Eyal, Jerusalem Mayor Nir Barkat turned to the families of the three boys and addressed them directly.“If this award has only succeeded in providing you with even some level of comfort, then it will have been a success,” he said.While the families have often cited the prize as a fitting way to memorialize their sons, in fact this award, and Unity Day which accompanies it, has done so much more in the three years that it has now been commemorated. Founded by Mayor Barkat, together with Gesher and the Fraenkel, Shaer and Ifrach families, the Jerusalem Unity Prize has called attention to the work of many individuals, organizations and initiatives working every day to celebrate unity within the greater Jewish community.The 2017 ceremony, hosted on June 7 by President Reuven Rivlin, highlighted the theme of unity and communal respect for all ages, with several multi-generational representatives coming on stage to stress the importance of unity from all generations.Beginning with President Rivlin, accompanied by his grandson and then Mayor Barkat alongside his father, all the speakers promoted the understanding that unity is an ideal that must be taught in all generations. Even the musical presenter, famed Israel musician Shlomi Shabat, came to the stage accompanied by his son and daughter, who performed a duet of their favorite hits.But the emotional highlight of the program came at its conclusion, when Iris Ifrach, mother of Eyal, came to the stage surrounded by her mother, Mazal Kafri, and her son, Elchanan. Each of the three generations that had been forced to endure the tragic loss of their loved one from three different vantage points stressed that it had not changed their outlook on the need for mutual respect.“I choose a life of love and as long as we are here on Earth we can work together to build a better world,” said Mrs. Kafri.The ceremony served as the occasion to salute the activities of four prize winners awarded in three categories: global, national and local. Winning in the global category was Limmud, the international network of Jewish learning communities. The national prize was awarded to Tzav Pius, which “works to develop an Israeli society in which Jews of differing perceptions along the secular-Orthodox spectrum share a strong commitment to Jewish and democratic values, thus encouraging social and educational changes.”The award in the local category was presented to two recipients. The first non-Jewish candidate for the prize, Dr. Janaan Frajj Falah has worked to advance initiatives that bridge social gaps between women of diverse backgrounds in Israel’s North. The second winner was Kehilat Hadar, based in Haifa, which works to promote social and cultural harmony between local groups of various religions and ethnicities.Since the first Global Unity Day was celebrated in 2015, its popularity has exceeded even the most optimistic expectations. This year more than 30 nations, 150 cities and 200 organizations across the globe participated in programming and events scheduled for schools, synagogues and community centers. While Israel remains the epicenter of the Unity Day activities – with close to one million participating through the Education Ministry and partnerships with the IDF and local councils – some 900,000 global participants from communities as far away as Finland, Hong Kong, Russia and even Jamaica participated with no less passion."Participating in Unity Day coming from a small community in Poland is very meaningful to us,” said Jan Kirschenbaum, co-founder of the Cukunft Jewish Heritage Association in Wroclaw, Poland. “Being together helps our community grow and feel unified as part of one big global Jewish world."Unity Day 2018 will take place on June 6, 2018. For more information www.unityprize.org