Israel is the world's leader in water reclamation with 87% of its wastewater undergoing purification and reuse for agriculture. 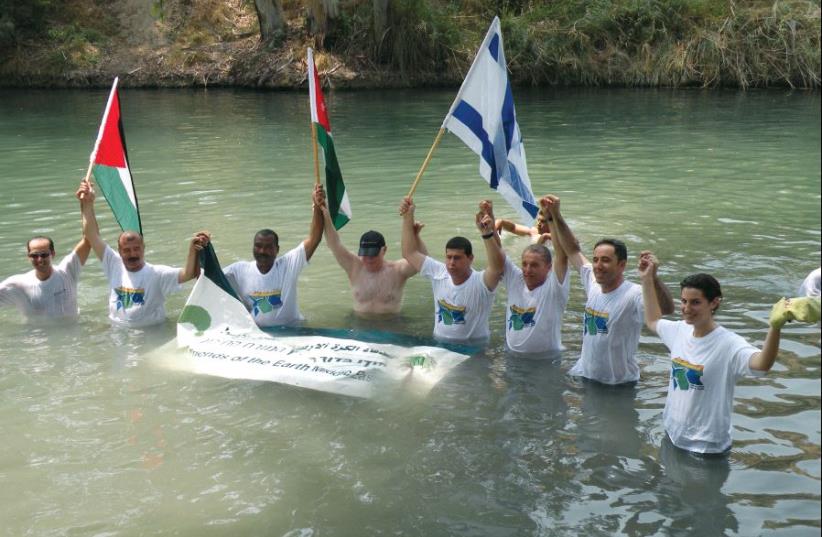 Israeli, Palestinian and Jordanian mayors and municipal representatives participate in an event in the lower Jordan River, to call on the two governments to rehabilitate the river
(photo credit: ECOPEACE MIDDLE EAST)
Advertisement
In honor of World Water Day, that was marked on March 22, Israeli-Australian water expert Gidon Bromberg was invited to participate in the US State Department Water Security and Transboundary Cooperation panel and brief US officials on the water situation in Israel.Bromberg is the director of Ecopeace, a regional environmental NGO that focuses on water and has offices in Tel Aviv, Bethlehem and Amman. He is a man driven by strong sense of urgency. Some think he is naive or that he cries wolf, but he believes that after four consecutive years of drought, we are nearing a regional water crisis – one that Israel can solve.Water scarcity is a defining feature of the Levant.The need for water shaped the cultures that emerged in this region. In the Bible, both Abraham and Jacob leave the Land of Israel for Egypt due to extreme water shortage. Wells are often a source of dispute and the Book of Deuteronomy promises that should the Israelites worship other gods, “The Lord’s anger will burn against you, and he will shut up the heavens so that it will not rain.” Even the Torah itself is compared to water in that they both come from the skies and give life.Precipitation levels have been recorded in Jerusalem since 1848 and the data shows that some periods, like the last decade of the 19th century, were blessed with an average of 700 mm. rainfall every year, while other periods are far drier.Between 1925 and 1935, a mere 390 mm. on average was recorded.