Europe's refugee crisis: A tour through the new Berlin

The Magazine ventures to Berlin to learn firsthand how the influx of refugees – and non-refugees – are changing the landscape of the German capital. 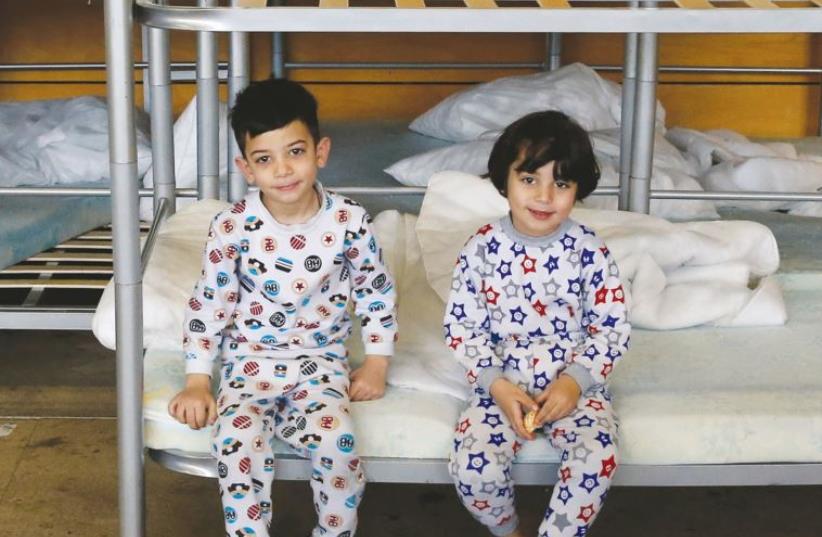 Syrian refugees in Germany.
(photo credit: REUTERS)
Advertisement
I told myself before traveling to Berlin to cover the refugee crisis that I would put my preconceived notions aside. This was my chance to learn about the crisis firsthand. It’s easy to take a position in what has emerged as one of the greatest debates of 2016 – to accept or reject the tsunami of refugees from Islamic countries into Europe – based on prejudices, assumptions, and media reports.For my orientation on my first day in Berlin, I met with Til Biermann, a local reporter for Bild, who was kind enough to introduce me to a Syrian refugee named Hamza (last name withheld), a graduate in journalism from Damascus University who interns for the paper.Hamza was to serve as my (informal) translator during my forays into the Berlin refugee camps.At first I was concerned that Hamza wouldn’t even want to talk to an Israeli reporter – let alone for an Israeli paper – but the 26-year-old was all eagerness, warmth and smiles. We met at the Starbucks near Checkpoint Charlie, the former checkpoint between East and West Berlin and a popular tourist destination.My pressing question, as a Jew and Israeli, was: Are refugees from Muslim countries importing Islamic anti-Semitism? “I think the last thing a refugee is thinking about is the Jewish people and Israel,” said Hamza, speaking of his Syrian brethren. He arrived in Berlin last summer, via a tumultuous journey from Damascus to Lebanon via Turkey to Budapest and finally to Berlin. His parents are still in Syria.“Everyone understands if you will be here in Europe you have to forget everything about this. The government taught them to build this hate. It’s fake. It’s not something real. The government found this enemy for nothing.”To most Syrians who fled, the dictator Bashar Assad is the greatest enemy – not Israel.Hamza lamented how Obama never kept his promise to intervene once Assad crossed the “red line” of using chemical weapons. He believes Assad’s purported hatred of Israel is a sham – a populist tool to stay in the government – while Assad would never retaliate against Israel if attacked. Hamza said his support of the revolution against Assad was fueled by his desire for Western values to permeate Syria. He wants to be free, which he feels in Berlin – a city he loves. The Islamists are simply filling the void in opposition to Assad. 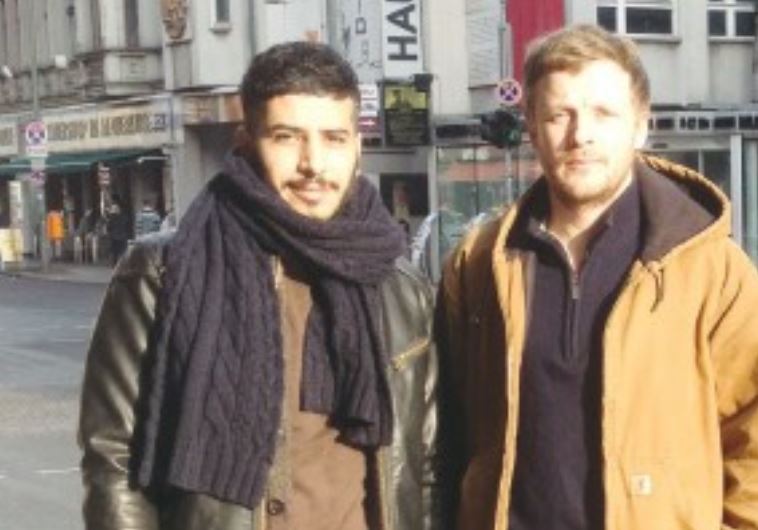 SYRIAN REFUGEE Hamza and ‘Bild’ reporter Til Biederman pose near Checkpoint Charlie.BIERMANN, A German with a Jewish grandparent who lived in Israel from 1999 to 2000 and is relatively fluent in Hebrew, wrote about his concern over Arab anti-Semitism, but, from a humanitarian perspective, he supports Merkel’s policy of accepting refugees; over one million migrants arrived in 2015 alone.He was one of the first on the scene interviewing the refugees. Initially, the editorial stance of the media, including Bild, he said, was to be welcoming, even if overall public opinion wasn’t.“I think the editors felt that if they would write now that all the refugees want money, things would go crazy,” Biermann said.But that’s changed since reports of mass sexual assaults in Cologne and other German cities on New Year’s Eve allegedly by Muslim migrants from North Africa.“I think it shifted a little bit,” Biermann said. “We have to report the reality. We have to report the problems; otherwise, the readers will think we lied to them.”And that’s what I planned to do – and Hamza, who was taught since he was young to consider someone like me an enemy, was eager to help.After we wrapped up the interview, and Biermann and Hamza left, I began to organize my notes on my laptop – excited at the prospect of visiting the Legaso refugee processing center the next day. While I was working, a man – a beggar – came up to me. He didn’t look German, and I wondered if he was a Middle Eastern refugee. He shoved a piece of paper – a solicitation notice – over the phone lying on the table, and looked at me threateningly. I expressed concern with my eyes to the coffee sippers around me. They just looked on. The beggar’s eyes weren’t asking for help.Finally, he walked off, and I went back to work, relieved, but wondering if I should run after him to find out where he was from, if he was a refugee who was unable to make it, for Biermann had explained that the government regulates employment for refugees based on their entitlements and migration status, creating challenges for employment.About to leave, I realized my phone was gone. I looked all over for it, frantic.“My phone was stolen,” I cried. “I think it was that beggar!” A man in his 30s named Erik came up to me and said he had been a victim of this “trick” in Sweden two years ago. A beggar makes himself as annoying as possible, shoves the paper in your face, and then slips the phone into his pocket.He assumed his thief must have been a “refugee.” He suggested I go to the police a few doors down.The police were not surprised. It happens all the time, the officer said, nonchalant about it. There is no point in launching an investigation. These are organized networks of thieves, and prison cells for these phone pilferers are revolving doors. “Are they migrants?” I asked.“One hundred percent.”Well, there goes my objectivity. This has become personal. I felt violated. The thief messed with the wrong reporter.I went back to talk to Erik, a Swede living in Berlin for three years, and I soon realized that even a personal violation will not necessarily sway people towards criticizing a pro-migration policy. His view mirrored the more conciliatory voices that emerged since New Year’s Eve, such as that of the mayor of Cologne, who responded to the debacle by encouraging women to take precautionary measures in public places to ward off assaults.“If you ask me, I don’t want to put blame on a people who steal to make a living. I put responsibility on cafes to make sure it doesn’t happen.” Starbucks, apparently, was aware that it happens, but hasn’t taken concerted effort to stop theses thieves before they strike.“That’s an easy way to escape especially at what’s happening – to put it on people who are fleeing a horrible situation.”I would take up my phone theft with Hamza, whom I was supposed to meet at Starbucks the next morning, but when I got to Starbucks, he asked me to meet at Lageso in the Moabit neighborhood instead. A refugee had died from influenza, apparently from waiting in line in the cold. 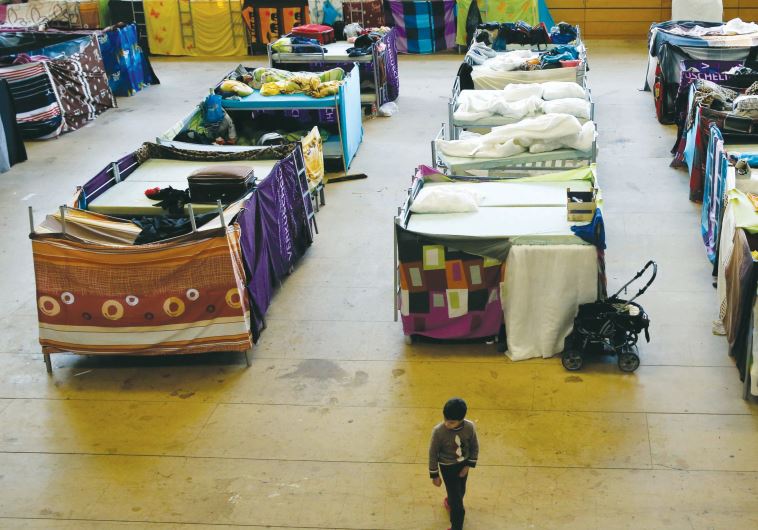 A CHILD walks in front of beds set up inside the Jane- Addams high school in Berlin’s Hohenschoenhausen district.THE PROCESSING center at Lageso, which is the German abbreviation for the State Office for Health and Social Affairs (with jurisdiction over Berlin as a city-state), consists of white tents. Mostly men were lingering outside, while Spanish volunteers handed out tea.Some men had to come as early as 2 or 3 a.m. to ensure their place in line. Lageso closes in the afternoon, and, apparently, it’s first come first serve. It was about 8°, not as cold as the snowy week before.First, I told Hamza about my stolen phone. “It’s not the refugees for sure,” Hamza said, feeling bad, as we walked the paths towards the tents. “I think it’s the gypsy people.” Truth is, the beggar didn’t necessarily look Middle Eastern, but the rise in phone theft – confirmed by the service provider – has coincided with the influx of “refugees,” a term – I soon learn, that doesn’t apply to everyone.Biermann later weighed in and said that these fake “beggars” are mostly likely from Romania and Bulgaria as citizens of those countries have been entering Germany since they were admitted into the EU. According to police statistics, he said, only about 1% of Syrian refugees has committed crimes since arriving; crime rates are much higher among North African immigrants.As Hamza and I looked for people to interview, it took us a few rounds to find Arabic speakers. Hamza could already tell by appearance where the men were from.“They’re from Afghanistan… they’re from Pakistan…” And when we couldn’t identify their nationality, we asked.Albanians. Moldavians. Russians. The only Syrians we found were a duo from Douma, a city Assad had attacked with chemical weapons. Compared to the other men loitering around, these young men, smartly dressed in snug jackets, seemed the most poised, put together. They share an apartment in the funky neighborhood of Neukölln and live off a subsidy of €400 each.Through Hamza’s translation I learned that 23-year-olds Mohammed Monaim and Ahmed Mahdi chose Germany for study opportunities. Monaim is studying civil engineering, and Mahdi is a medical student; Neither could finish their studies in Damascus because of the war. Most of their family is back in Syria; it’s harder for their parents to leave. Both lost cousins in the fighting. Both are grateful for the chance to start a new life in Germany, which they reached through a common route via Greece and Hungary.Aside from Lageso officials, they find Germans extremely friendly.Both are non-practicing Muslims, and Mahdi even claimed to have some Jewish ancestry.Towards the end of the interview, as my identity as an Israeli reporter was revealed, Hamza asked them about their view of Israel.“I think most of the refugees had bad thinking about Israel but not to do something bad,” Monaim said.“Most of us escaped war,” Mahdi added. “We don’t want to start a new war. We just want to live our lives.”Monaim said he even noticed a change in attitudes towards Israel on Facebook posts; more Syrian voices are emerging that promote peace with Israel.“The thinking is starting to see another way,” Monaim said. “We see the problem isn’t Israel. It’s inside us.”Hamza said he has no jihadi friends with intentions to spread Islam in Europe.He said the Paris attacks by ISIS terrorists who apparently snuck into Europe as “refugees” ruined opportunities for well-intentioned Syrians. Like Monaim and Mahdi, he is tired of apologizing for the migrants who groped and allegedly raped German women on New Year’s Eve. They’re not Syrian, he insisted, whose population he says is more refined, educated.“They’re animals,” Mahdi said of the perpetrators. All three resent the fake “refugees” who take advantage of their plight to receive Germany’s benefits for asylum seekers. Mahdi even once met a beggar asking him for money, claiming he was from Syria, but the beggar couldn’t speak Arabic.Hamza and I finally found some more Arabic speakers, these from Egypt. They were scruffier than the Syrians and much more eager to speak with, or rather complain to, a reporter.Mohammed from Egypt arrived six months ago, and he has no place to sleep. He waved his papers at me; he came for a new appointment to renew benefits only to leave with another appointment slip. Halab had not yet received authorization papers to reside in Germany legally, and he has been sleeping at the Lageso compound for four days, desperate for an appointment that will get him that authorization.After several attempts to contact her via email, the Lageso publicist said they are too understaffed to give me a proper interview. The best she could do was provide some statistics. About 50,000 refugees live in Berlin’s 144 shelters and camps; another 10,000 are already settled in apartments. 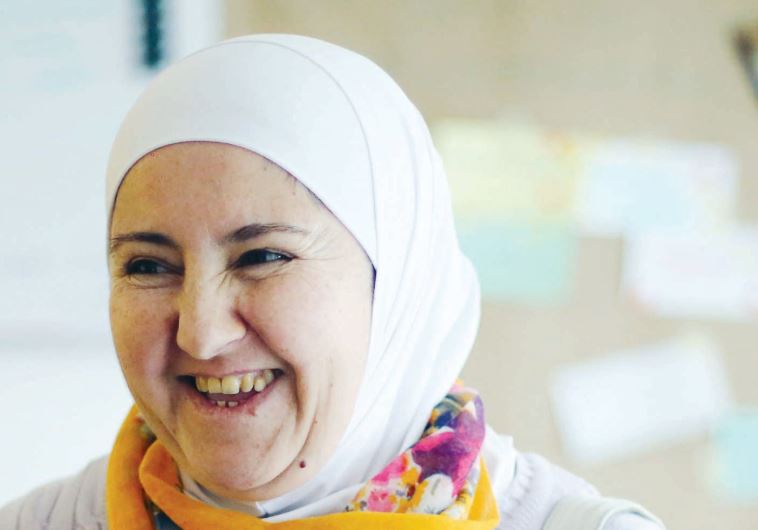