The Hashemite Kingdom is set to hold parliamentary elections this week. 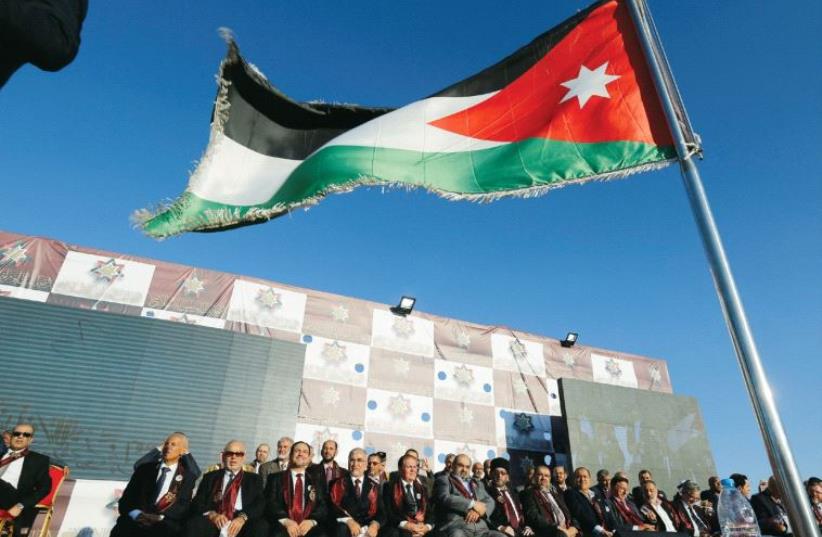 Candidates of the Islamic Front Action party, the Muslim Brotherhood’s political wing, announce their candidacy for the upcoming elections in Amman earlier this month
(photo credit: REUTERS)
Advertisement
AMMAN – Jordan’s Muslim Brotherhood has faced a harsh crackdown this year. In April, Jordanian security forces shut down the offices of the 70-year-old Islamist movement throughout the country and Amman has orchestrated a relentless delegitimization campaign against the Brotherhood, highlighted by King Abdullah II calling the Islamist movement in 2013 a “masonic cult... run by wolves in sheep’s clothing.”Despite this, amid substantial regime pressure, the Brotherhood is gearing up to participate in the September 20 parliamentary elections. Nominating 19 women, the Brotherhood’s political wing, Islamic Action Front, is joining forces with outside candidates and includes prominent Christian and Circassian nominees, something that would have seemed highly unlikely not long ago.

Mohammad Ersan, editor-in-chief of Balad Radio, explained in an interview that by forming coalitions with Christians and other non-Islamists, the Brotherhood is sending a message to the government that it is interested in cooperating and not dominating the parliament.Sean Yom, professor of political science at Temple University and Jordan expert, called the Brotherhood’s more inclusive approach very significant.“It reflects the Islamic Action Front’s realization that they need to be more pragmatic and less ideological in order to maintain their political influence in Jordan,” Yom noted.In addition to presenting a more moderating image, incorporating minorities and a relatively large number of women is beneficial due to the quota system. Fifteen women along with 10 Christian and Circassians are guaranteed seats in the next legislature (of 130 seats).The Islamic Action Front has also shifted its campaign strategy in other respects. During previous elections, the party’s main slogans included “Islam is the solution” and “the Koran is our constitution.” But in a recent interview, spokesman Murad Adaileh acknowledged that these slogans would disappear now. Instead, the Brotherhood intends to emphasize issues that appeal to all elements of Jordanian society, such as political reform and restoring citizens’ trust in parliament.The Brotherhood’s engagement can also be interpreted as a sign of plain pragmatism.During the previous two parliamentary elections in 2013 and 2010, the Islamic Action Front boycotted the process, due to the absence of genuine political reform.Given that the government has intensified its repression of the Brotherhood, with the jailing of Brotherhood- affiliated and other journalists continuing, political freedoms have hardly improved in recent years.In the 2010 elections, prime minister Samir Rifai attempted unsuccessfully to persuade the Islamist party to participate in elections. The party’s participation is significant because by competing on September 20, it lends legitimacy to the Jordanian elections, important for a country so heavily dependent on Western, and particularly American, aid.EVEN BEFORE the electoral race, the Islamic Action Front demonstrated signs of moderation. Jordan’s Muslim Brotherhood cut its ties with the Egyptian branch in February, showing that the group is principally devoted to the Jordanian state, despite the group’s ideological connections.Founded in 1945, Jordan’s Muslim Brotherhood has played a critical role in Jordanian society and politics throughout its 70-year existence. As an Islamist party, the Brotherhood has consistently called for an increase in the implementation of Shari’a (Islamic law). The movement is a strong backer of the Palestinian cause in its struggle against Israel. However, during the 1970 uprising led by Palestinians against the Hashemite regime, the Islamic group did not join in the fighting against King Hussein.The Brotherhood has a long history of working with the regime. In the important 1989 elections, the Islamist party and its allies won approximately one-third of the seats. For decades, Jordan’s Muslim Brotherhood maintained ties with the larger Egyptian branch, which was established in 1928. At the same time, the Islamist group insisted that the Brotherhood sets its own priorities and policies based on the unique situation in Jordan.Oraib Rantawi, director of the Amman-based Quds Center for Political Studies, explained that for the Islamic Action Front, the elections are an excellent opportunity to “show that it is still the sole legitimate representative of the Islamist movement [in Jordan].”Last year, a small group from within the Brotherhood split off from the mother organization and received official licensing from the Ministry of Social Development. Adaileh called the move a “coup sponsored by the regime.”Labib Kamhawi, a Jordanian opposition activist, noted that the new splinter organization is not trusted or supported by the country’s Islamists. A strong performance at the polls for the IAF, in contrast to the anticipated lackluster results for the regime-favored breakaway faction, would highlight the Brotherhood’s popular legitimacy, he said.LEADING JORDANIAN analysts believe that the Brotherhood will perform relatively well in next week’s race.Rantawi estimates that the Islamic Action Front will win 18 to 20 seats, three times the number it received in its poor 2007 performance, when the Islamist party secured only six parliamentary representatives.Veteran Al-Quds Al-Arabi bureau chief Bassam Badarin is expecting even better results for the Brotherhood party in the September 21 competition, with 25 to 30 seats for the Islamic Action Front and its allies.Given the weakness of other parties, Rantawi asserts that the Islamic Action Front will be the largest opposition bloc in the upcoming legislative session. Because of the government’s crackdown on the Brotherhood, sympathy with the Islamist movement has increased, which has boosted the Islamist party’s popularity, Ersan added.Due to the long-standing friction between the Brotherhood and Hashemite leadership, Badarin emphasized that the Jordanian regime is worried by the trends indicating a strong Islamist performance. The Brotherhood’s 25-year-long criticism of the country’s ties with Israel, widely shared by most Jordanians, along with its unified oppositional stance in parliament consistently irritate the government, he said.At the same time, even if the Islamic Action Front and its allies were to win more than 20 seats, their impact on policy would be somewhat limited. The legislature mainly concentrates on domestic issues, while the Royal Court and intelligence services handle sensitive foreign policy and security dilemmas, stressed Rantawi.But a more organized Brotherhood, speaking from the dome of parliament, would provide them with increased media attention that would intensify public pressure against some of the king’s controversial decisions.Nonetheless, Badarin cautioned that despite the relatively high hopes for the Brotherhood’s performance in the upcoming race, there is one important caveat. The former intelligence chief admitted to falsifying the 2007 election results in favor of pro-regime candidates, and charges of fraud plagued the last contest in 2013.In the current race, European Union monitors will spread across Jordan to verify the voting, given the previous accusations of corruption, and the Independent Election Commission has promised transparency.If the Brotherhood appears to strengthen its parliamentary power, the question remains whether the Jordanian intelligence apparatus will refrain from interfering, given the sides’ long-standing tensions. The writer is an Amman-based journalist. @AaronMagid