Among the ruins in Jerusalem and Berlin: A call to return

For the more than 150 participants at the Muslim Jewish Conference 2016, Tisha Be’av 5776 came at the end of a long and intense week of dialogue, introspection, and in many ways tangible progress. 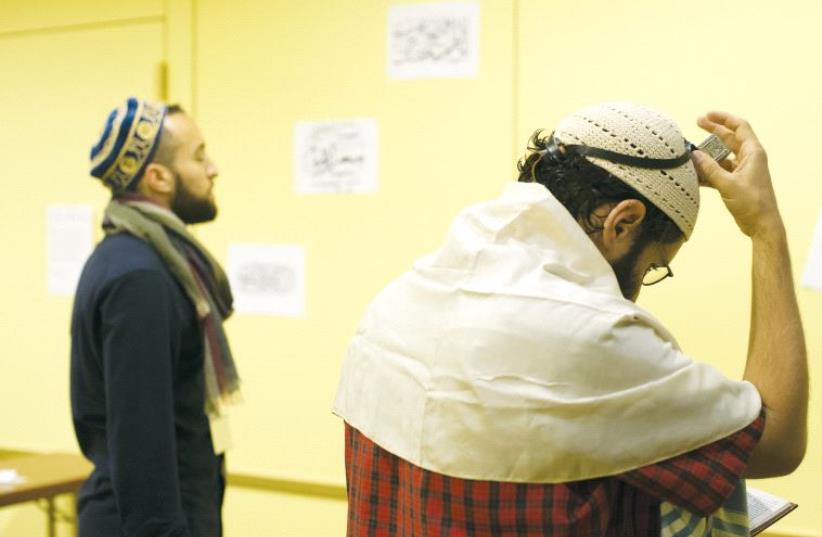 Muslim and Jewish participants in the seventh annual Muslim Jewish Conference perform Friday prayers
(photo credit: DANIEL SHAKED)
Advertisement
BERLIN – Listening to Lamentations, Jeremiah’s vivid recounting of Jerusalem’s destruction by the Romans, I asked myself in quasi-Passover style: “Why is this Tisha Be’av different from all others?” The simple answer was that as opposed to previous years spent fasting in the Holy City, I was now in a hotel conference room in Berlin. More notably, roughly a third of the congregation sitting on the floor that night were Muslims. There was far more to it than that, however.For the more than 150 participants at the Muslim Jewish Conference 2016, Tisha Be’av 5776 came at the end of a long and intense week of dialogue, introspection, and in many ways tangible progress.

Muslim and Jewish participants pray and embrace during a ceremony at the site of the Sachsenhausen concentration camp in Oranienburg, GermanyJEWISH LIFE in much of Europe remains a shadow of its former self. The vast majority of communities and representative bodies build high walls, physically and politically, cutting themselves off from society at large at the grassroots level.While that may have been sufficient to continue Jewish life on the continent for a time, Europe approaches the political precipice once more.Rampant radicalization of both majority and minority populations has led to the rise of the xenophobic far Right across much of the continent on one hand, ghetto-ization and barbaric terrorism on the other.This is no time for political disengagement.With Jews gored between the horns, anti-Semitism has reached an intolerable level for many, but for Rafael Tyszblat, the 36-year-old Parisian who plays a large role in organizing the MJC, the Jewish community in France has been misguided in its approach to its role in society.“The organized Jewish community does not see the value in building bridges with other minorities in France,” he said, comparing a healthy approach to social engagement to that of a balanced attitude to religion.“Safety and integration is like practicing a religion: you have the vertical relationship with God, but also horizontally, with your brothers. So too with the Jewish community and the state, which is vertical, and with other communities in the country – horizontal.”Acknowledging the difficulties of reaching out when Jews are regularly the target for abuse or worse, Tyszblat said, “It takes perseverance in times of war, but we need to make the extra effort to understand how to talk with others.”He added that in his experience there are leaders in both communities who want to reach out to one another, but lack the tools and spaces to make it possible.Inter-communal dialogue can have a major impact in combating racism, where lobbying the state falls short in providing total security. In any case, complete security on the reliance of the state is not achievable even when a government is highly attuned to the needs of the community, as is the case today in the UK and Germany.This is even more evident in France, where Manuel Valls’s government takes serious action against anti-Semitism.However, while the state’s support has been welcomed by the community, Jews have seen the armed guards outside synagogues as a signal that the path to safety leads across the moat and behind the drawbridge.Yet, as the situation continues to spiral out of control, thousands leave for Israel and the UK.Something is not adding up.Indeed, the society French Jews leave behind is fragmenting and radicalizing along every division line, according to Nassr Eddine Errami, a Moroccan-born Shi’ite religious leader in Paris and Strasbourg who staffed the MJC this year.From his perspective among the Muslim community, the Jewish exodus is only making the situation worse for everyone in the long term.Echoing Tyszblat, Errami said that in his experience, the best way to combat radicalization is through exposure to the other. He specified that distance between minorities, both physical and social, leads to a “competition of victimization, which only shuts down empathy and understanding of the other’s perspective.”Pushing for greater cooperation in France and across Europe, he said that there is no reason that Muslims and Jews cannot come to understand, support and help de-radicalize each other. 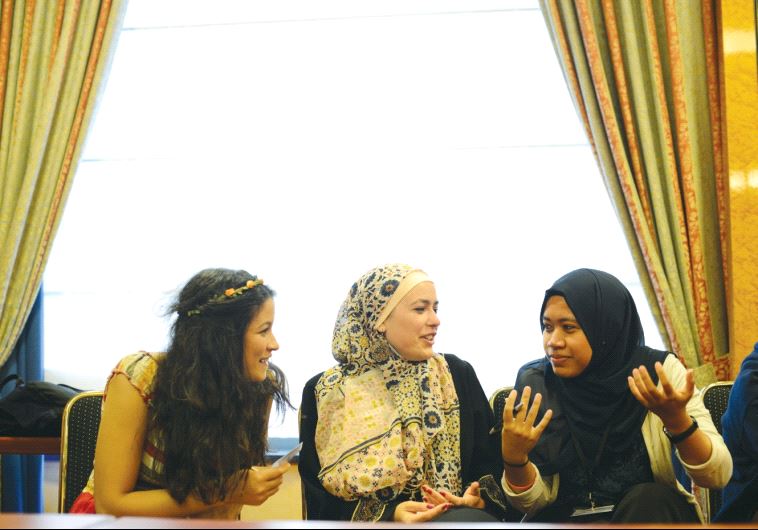 Participants in the Power, Religion and Human Rights committeeAddressing l’éléphant dans le salon, he says that as long as both groups do not present blindly uncritical narratives of the Israeli-Palestinian conflict, there is significant room for progress in de-escalating what has become a toxic issue between Jews and Muslims in every society they share.“If Zionism is advocating for peace and a solution for two states, or [even] a secular state including all origins and backgrounds, then many Muslims are Zionist,” he said. Coming from an imam, that position represents an opportunity, not a threat.The MJC itself embodies the idea of opportunity, but its success is by no means a guarantee. With the most vigorous argument of the week possibly going to the unlikely match-up between a pro-Clinton Orthodox rabbi and a pro-Trump Muslim, organizers privately acknowledged that each conference could go disastrously wrong. In practice, however, the successes pile up.As an Israeli-British Jewish Zionist who served in the IDF, I found at the MJC curiosity and sincerity in far greater volumes than hostility and rejection.Unlike in some interfaith spaces, anti-Zionism and auto-flagellation were neither prerequisite nor predominant.By and large, those present had open minds, were turned off by slick propaganda, and weary from absolutist polemics.Those apathetic and suspicious of these initiatives from within Diaspora communities must learn instead to nurture opportunities such as these.DESPITE NUMEROUS issues with other minorities, it is not only the fellow stranger that Jewish communities need to keep check of in 21st-century Europe.Civil liberties in France and other nations are being degraded on the back of far-right nationalist populism, often under the guise of security measures.In Paris, police brutality against minorities and refugees goes unchecked and unanswered; just last week, between riot police gassing and beating non-violent protesters, the French authorities were caught tricking refugees into signing their own deportation forms, under the guise of applying for housing assistance.Away from the realm of individual rights, some journalists compare their position in working with the authorities as akin to reporting from a Middle Eastern dictatorship. A culture of fear and repression is spreading.As Muslim women in modest swimwear are called extremists, and told by city mayors they have “no business” on French beaches, and as France and other nations deport Roma from their borders to muted opposition, Jewish communities must question when, not if, the mob will turn on their values, on their traditions.That the Jewish Diaspora has until now not offered solidarity with the Roma – a community that shared its tragic fate in the Holocaust – or with other minorities under attack, the picture sketched by Tyszblat and Errami comes into focus, and it’s ugly.When phrases such as “get rid of four million problems” – in relation to the country’s Muslim citizens – can reportedly be freely aired in the corridors of power in France, those with a spine should shiver.Talk of deportations does not always stop with deportations; acquiescence in the persecution of one minority is as short sighted as it is immoral.For Jews, passivity is no longer a legitimate strategy in Europe. Passive remembrance of the Holocaust is no longer an effective call to vigilance.AS THE Jewish people have begun to turn prophecy into reality, and the depths of their sadness becomes gratitude and song in Israel, so too must they become a force for good in Europe.Dialogue is a necessary and critically needed tool to leverage both security and civil rights in the Diaspora; and it follows that supporting interfaith initiatives such as the MJC must become a priority for Diaspora communities.Erich Fromm wrote that “to have faith requires courage, the ability to take a risk, the readiness to accept pain and disappointment. Whoever insists on safety and security as primary conditions of life cannot have faith… he makes himself a prisoner.”When the Second Temple stood in all its glory, Jews nevertheless sat and fasted. They did so not just to mourn Solomon’s Temple, but to pray history would not repeat itself.The path to securing a Jewish future in the Diaspora begins with mourning the Holocaust for these very reasons. It ends not behind a castle wall, but in a conference room in Berlin, mourning the cruelty of human history with a Pakistani Muslim, and vowing to change its future together.Was this Tisha Be’av different from all others? That will be up to us all over the next year.