The exhibit with a dancing dress has haunted visitors. 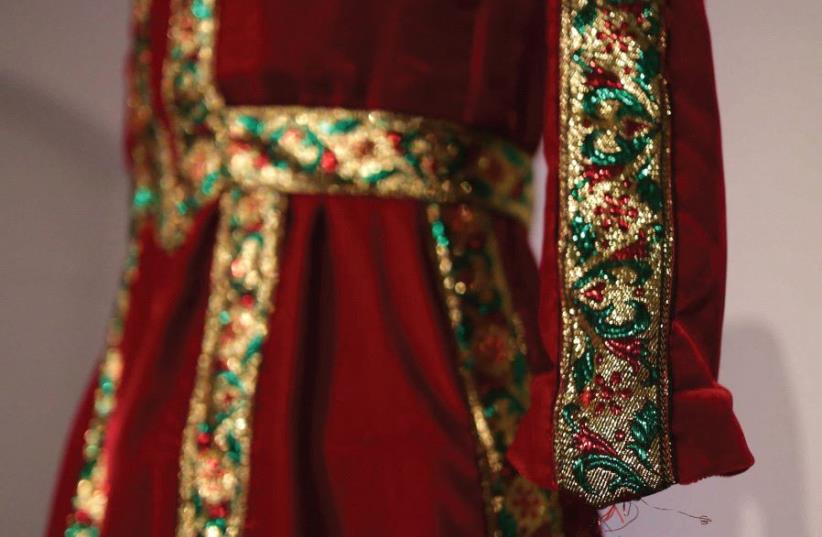 Armenian dress
(photo credit: ITAY NADAV)
Advertisement
Isaac Bashevis Singer once mooted, “What strange power there is in clothing,” while William Shakespeare more famously noted that “clothes make the man.” While the Nobel laureate and the Bard of Avon may have been referring to how our apparel can affect our demeanor and how others relate to us, they were not referencing the wider and deeper issue of cultural and ethnic baggage for which clothing can serve as a highly aesthetic and emotive repository.Garo Kopoushian is keenly cognizant of the historical import of traditional threads, and demonstrates that palpably in his “A Forgotten Dance” work, which is currently on display at the Naggar Multidisciplinary School of Art and Society, in Musrara, Jerusalem.

The 28-year-old final-year art student clearly does not subscribe to feted French actress Simone Signoret’s posit that “nostalgia isn’t what it used to be.” For Kopoushian, his family and community, keeping memories alive is a part and parcel of everyday life.Kopoushian is a member of the Armenian community of the Old City of Jerusalem. The particular tragic, historical passage to which his work refers is the Armenian genocide, when the Ottoman government systematically exterminated around two million Armenians, between 1915 and 1922.The artist’s explanatory text that goes with “A Forgotten Dance” describes the work as “a mechatronic installation animating a relic – a traditional Armenian dress.” Kopoushian says it is “a mechanical performance of an object devoid of life, floating between the physical and spiritual realms, looking for a path back home, whence stood a graceful dancer, her feet now scorched by the fiery desert of Deir ez-Zor. The dancer is long gone, but the dress still lingers – hollow, forgotten, with only its shadows to keep it company.”Deir ez-Zor was a concentration camp where Armenians were held by the Ottoman forces before being forced to take death marches in the desert.The said garment hangs on a suspended contraption with the sleeves connected to barely visible wiring. As the stirring soundtrack – “They Have Taken the One I Love” by French-Armenian wind instrument player Levon Minassian – progresses, the dress “dances,” arms ascending and descending while the whole work revolves.The dress is illuminated by several powerful lamps that produce the aforesaid accompanying shadows.It is, says Kopoushian, something of a cathartic exercise.“I remember, from the age of six or seven, every year we, the whole community, would all get together on the memorial day of the Armenian holocaust. We’d wear special shirts. It is a very important day.”While Kopoushian describes himself as an atheist, he says the church, religion and the history of the Armenian people play an important part in the life of the Jerusalem community.“I went to a religious Armenian school. When I was small, we’d go to the church, at least on Sundays. That is a part of life.”The same can be said of the genocide of a hundred years ago.“Like Jews grow up with stories of Auschwitz and such like, we grow up with these stories from our parents and grandparents,” explains Kopoushian. “I am the third generation of the Armenian genocide.”His grandparents survived those turbulent times as children, and eventually made their way to Jerusalem.“We didn’t learn about the genocide at school. We don’t have to learn it at school because we know all the stories from a very young age. It is genetic with us.We have a chromosome with that. At school we’d talk about why it happened and how someone could be capable of doing such a terrible thing. I wouldn’t say the [Armenian] holocaust is an identifying part of who we are, but it is a part of us.”Kopoushian describes his creative efforts in sort of non-arts terms.“I don’t know how much of an artist I am,” he muses. In fact, he says he was more drawn to the mechanical side of assembling installations. “One day a friend of mine who was studying at this school showed me a picture of a robot he and some other students had built. I asked him what it was and he said, ‘That’s what I’m learning.’ He started in animation and moved to new media.”Kopoushian’s prior brush with formal education was in hotel management, and he still works at a hotel in Jerusalem.“I’d been working for a long time and I wanted to try something else. I like these kinds of [constructional] things. It’s not too academic. It’s a lot of hands-on stuff, programming and that sort of thing. That appealed to me.” That engineering ethos, coupled with his ethnic heritage, led to “A Forgotten Dance.”“I was born in Jerusalem and was brought up in the Armenian quarter in the Old City, a home away from home, one of many Armenian communities within the diaspora that still retains the language, culture and heritage of my people, and the memory of our devastating past,” continues the text that goes with the work.“Like a scar of a deadly wound that never completely healed, we wait, we hope that one day justice and a small measure of peace will be granted to all those who have perished, and for us who have survived.”Toward the end of his studies at the Musrara school, it became apparent that the time was ripe for Kopoushian to feed off his own cultural-ethnic baggage.“They asked me when I was going to do something from Armenian art. But I’m not an expert in Armenian art. I learned some things here, but I don’t know much more than that.”On the other hand, he does know a thing or two about Armenian tradition.“We have an archive with all sorts of dresses women would wear for dancing,” he says. “They are replicas of what people used to wear, centuries ago, until they came to the Middle East. It is fascinating.”The color of the dress is also an important cog in the heritage wheel. “The dress I used is red – all the dresses in Armenian traditional dance are red. Red is the color of anger and high energy.”Kopoushian decided to counter the feral side with something on the sad side.“I love duduk (flute), so I took this piece by Levon Minassian. It is mournful and reflects the suffering of the Armenian people. He tries to express that through his music.”As you enter the mostly dimly lit room, the brightly illuminated dress makes for impressive viewing. The richness of the velvety red material is heightened by embroidery and applied gem-like decorations.“I wanted this to give the impression of a girl dancing,” Kopoushian explains. “She is no longer with us, but her spirit lives on.”Shades of the rich tradition of Armenia, of years gone by.