A status of its own

By AKIN AJAYI
AUGUST 27, 2010 16:54
The Facebook Effect vertical
(photo credit: Courtesy)
Advertisement
In late 2003, 19-year-old Harvard undergraduate Mark Zuckerberg started playing about with a new tech project. He already had an impressive track record of seeing through innovative ideas to fruition – an earlier project from high school had attracted interest from both Microsoft and AOL. But thefacebook.com – as it was known at the time – was something altogether different.The premise was simple: to provide Harvard undergraduates an on-line portal to share information about themselves with their social network, a tool for enhancing relationships with people whom they knew or had interests in common. The service went live on February 4, 2004; in four days, 650 students had signed up, and within a month thefacebook.com had 10,000 members. A new paradigm in social communication was born. 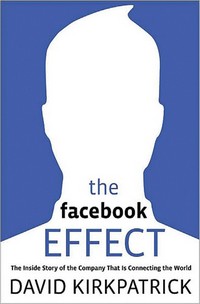 How this project became the most influential presence in Internet history is the subject of David Kirkpatrick’s The Facebook Effect: The Inside Story of the Company that Is Connecting the World. Part corporate biography, part social analysis, it makes a good attempt at unpicking why Facebook has become so successful. As Kirkpatrick makes clear, Facebook’s dominance of the social networking world has much do with good timing, hard work and, occasionally, good fortune; but it is also as much about the inscrutable temperament of a focused young man, confident enough to trust his instincts in building his part-time project into a catalyst for shaping the future.Numbers are significant to the Facebook success story. Because of its phenomenal take-up – half a billion users, 70 languages – Facebook has been able to use its demographic and geographic spread to fundamentally change the way in which people engage with each other. On the upper end of the intellectual scale, social networking creates the opportunity for users to share information and engage in compatible interests with consummate ease; at the other end, it facilitates “an element of wanting to belong, a dash of vanity and more than a little voyeurism.”But Facebook also stands out for its meteoric – by any standard – rise as a commercial concern, with a paper value of $15 billion. As a business case study, Kirkpatrick – for many years senior editor for Internet and technology at Fortune magazine – does a solid job of exploring the commercial factors in Facebook’s success. Primary among them was the access it provided to media and advertising concerns. Even in its infancy, Facebook offered access to what has been described as “the richest data set by a mile” for on-line marketeers: Because users invariably – and willingly – share significant personal information about themselves and their interests with their network, it afforded advertisers an unprecedented opportunity to tailor and target adverts specifically to relevant audiences.That said, Kirkpatrick points out that Zuckerberg never intended Facebook to be just another platform for merchandising. Rather, commercial interests provided the wherewithal for a vision that is at once both astonishingly simple and breathtakingly audacious: “to change the world... to make (the world) a better place.”Facebook’s value to users as a networking aid is predicated on the fact that users are generally – and unusually, in the murky anonymous world of the Internet – identifiable as the people they claim to be. Zuckerberg sees this as a good thing; as Kirkpatrick observes, Facebook was founded on “a radical social premise – that inevitably, enveloping social transparency will overtake modern life.”Transparency is clearly no bad thing in itself, but as the author notes wryly: “For better or for worse, Facebook is causing a mass resetting of the boundaries of personal intimacy.” In this respect, one suspects that Facebook’s lasting legacy will be to change existing notions of the distinctions between public and private space.Transparency, of course, extends beyond the personal into the realms of public accountability, corporate responsibility and good governance. “[Facebook] puts the onus on companies to be more good and trustworthy. A more transparent world creates a better-governed world and a fairer world.”Kirkpatrick notes that it isn’t a surprise that Facebook has become a major agent for social activism, users mobilizing authentic grassroots support for challenging the status quo. Hierarchical boundaries are increasingly diminished, as more people find a voice and an audience for their opinions on Facebook.

On the whole, The Facebook Effect does a good job of tracing the maturation of both the platform and the founder, and the corporate and ideological tensions that Facebook – that Zuckerberg – has so far deftly negotiated. Lacking, a little disappointingly, is a wholehearted attempt at unpicking Zuckerberg himself. Facebook remains, first and foremost, a Zuckerberg project; aside from his 25 percent shareholding, he directly controls three of the five seats on the board, and thus is able to steer the company in precisely the direction he wants it to go.Although, as Kirkpatrick documents, there has been the occasional hiccup along the way, Zuckerberg demonstrates an almost preternatural capacity for absorbing information and ideas, and for integrating them – when useful – into his grand vision for the future. Understanding where this vision grew from would be interesting; it might offer a glimpse into the future of Facebook, and the direction that Zuckerberg intends to steer it as it becomes a ubiquitous part of the social landscape. As Zuckerberg himself puts it, “The companies that succeed and have the best impact... are those that have the longest time horizon.”Facebook has only been around for six years; what it does next will be fascinating to see.
Advertisement
Subscribe for our daily newsletter