Through the device of his alter-ego narrator, Haim Sabato candidly reveals the struggles faced by the state’s early immigrants as they unpacked their emotional burdens.

By ABIGAIL KLEIN
AUGUST 27, 2010 16:54
From the Four Winds vertical
(photo credit: Courtesy)
Advertisement
Remnants of European and Middle Eastern/North African Jewish communities arrived in the fledgling State of Israel during roughly the same time period. Despite converging at a common point, they had thousands of years of divergent history separating them. Busy transplanting wounded lives after experiencing very different traumas, they generally understood little about one another’s communal calamities.Reading about this Jewish divide in the lyrical prose of Haim Sabato brings a singularly human dimension to a momentous cultural phenomenon. Using his signature “historical autobiography” style that first earned him well-deserved national recognition with Adjusting Sights (Ti’um Kavanot), the accomplished storyteller conveys a profound tale of personal discovery and cross-cultural affinity. This is accomplished with poignant tenderness through the device of his alter-ego narrator, Haim, an Egyptian child émigré. 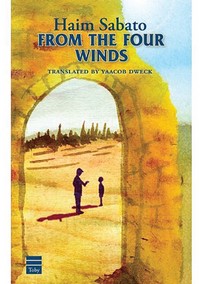 Sabato appropriately does not recount the events that led to North African and Hungarian families living cheek-by-jowl in the desperately poor immigrant shantytown, Beit Mazmil, in what is now the Jerusalem neighborhood of Kiryat Hayovel. The reader is introduced to the bewildering differences among neighbors as young Haim perceives them, and gains insight into those differences in parallel with a maturing Haim.He first encounters his future neighbors on the “little swaying ship” that took him and his extended family on the final leg of their trek to Israel along with a group of Hungarian Holocaust survivors: “Even then we saw that the Jews from Hungary were silent and worried all the time, but we did not know why.”Notably, Haim’s father refuses to pray separately from these mournful souls even though he can barely understand their pronunciation of the Hebrew liturgy. He teaches his young son: “We are immigrants to Jerusalem, a city knit together, the city that makes brethren out of all Israel.” Haim explains, “Father was certain that in Israel everyone prayed together. How naïve we were then.”Before readers meet Israel Moshe Farkash, the remarkable émigré who will eventually entrust his wartime stories and possessions to Haim, they are first introduced thoroughly to Haim himself – a contrivance that is essential to an understanding of the coming relationship between the two.The scion of a pious and respected rabbinic family, Haim loses neither his joyful demeanor nor his sweet innocence as he daily battles the crowds attempting to board the No. 18 bus to Bayit Vagan, where he attends Talmud Torah. One of the best stories in the book relates how in second grade in 1959, Haim longs to dress up as a cowboy for Purim. His hard-working and nearly penniless father takes him to a kiosk to outfit him, and although the costume consists of nothing but a cardboard cowboy hat, Haim is elated. He remains cheerful even after a Purim morning rainstorm turns the hat into “a soggy circle of paper.” Oblivious to the inferiority of his “costume,” the child is filled with pride when the wise and gentle principal declares his inability to guess Haim’s true identity.This story provides a thoughtful backdrop to Haim’s first encounter with Farkash, who mystifies the young boy by telling him: “On only two days of the year, I don’t wear a costume...on Yom Kippur and on the 12th day of Kislev.” The older man often refers to “over there,” a place no Hungarians could bring themselves to speak of.As details of the Shoah and Farkash’s past sufferings gradually become known to Haim – who chooses not to ask questions but instead trusts that “everything would become clear of its own accord” – he struggles to grasp the depth of sorrow surrounding him. “[W]hat I saw with Farkash and what I heard from him was so thoroughly wrapped in pain that there was no more room in my heart for such pain to dwell.”

As beautifully as this book reads in English – a testament to the skills of the translator and the editors at Toby Press – like Sabato’s previous novels it is best read in the original Hebrew, Bo’i Haruah (2008). Lacking sufficient fluency to do so, I read parts of the English version with the Hebrew edition open to the same passages so that I could at least compare a sampling of Sabato’s words with those chosen by the translator. Sabato, a respected hesder yeshiva founder and teacher, uses biblical quotations and literary phrases that are simple in Hebrew but difficult to render adequately in translation.Despite the customary disclaimer on the copyright page (“The characters, incidents and dialogues are products of the author’s imagination and are not to be construed as real”), it is no secret that young Haim is in fact Haim Sabato and that the names of the Farkash family members also are authentic. According to a close associate of the author, using a fictional framework gave Sabato the freedom to fashion imagined dialogues and details around the writings in a diary that Farkash gave him.From the Four Winds is a moving contribution to modern Israelis’ understanding of the emotional burdens that some of the state’s earliest immigrants from diverse parts of the world overcame to make meaningful lives for themselves and their descendants.
Advertisement
Subscribe for our daily newsletter