Can women pave the path to peace? 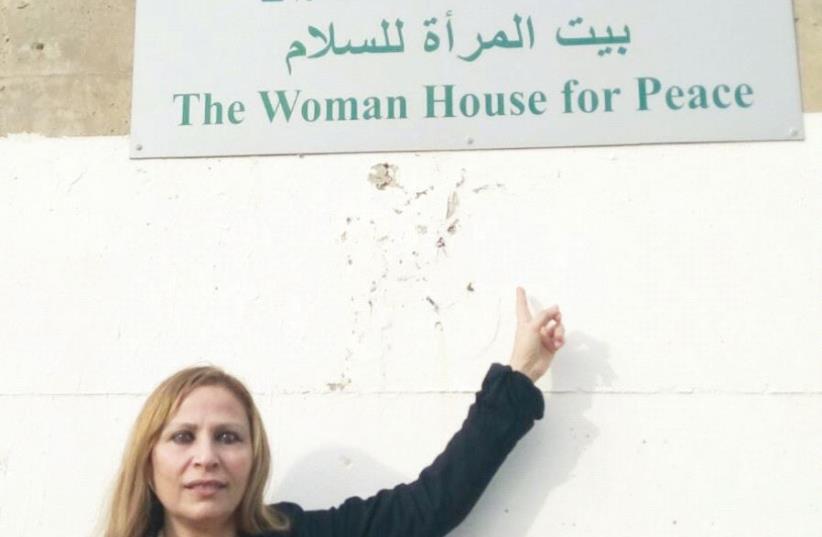 Dr. Janan Faraj Falah stands beneath the sign of the organization she founded in Acre to promote conflict resolution
(photo credit: Courtesy)
Advertisement
A passionate advocate for removing social and cultural barriers between peoples of differing communities and backgrounds, Dr. Janan Faraj Falah will be the first non-Jewish winner of the Jerusalem Unity Prize, to be presented in early June. A Druse resident of Acre, she has served as a pioneering force in advancing women’s rights across religions and denominations through a network of groundbreaking activities in Northern Israel. She firmly believes that within the maternal figure perhaps lies the avenue to lasting conflict resolution.In 2003, Dr. Faraj Falah founded the Women’s Vision of Acre Foundation with the specific goal of uniting Arab and Jewish women to address issues of social concern. Describing herself as a “true believer in the power of people,” she speaks with a sense of remarkable hope for the future of her community and for humanity at large.

The first Israeli Druse woman to receive a PhD, today she is also a professor of literature at the Arab Academic College of Education in Haifa and a researcher at the University of Haifa. She authored The Druse Woman, which is often referenced as the authoritative text detailing the role of women in that society. She works together with Partnership 2000 of the Jewish Agency as well as Israel’s Ministry of Foreign Affairs to ensure that her messages of unity and the advancing role of women reach as wide an audience as possible.Ahead of the presentation of the prize, she described her vision and why she believes social and even political unity is possible.“My objective in founding this organization was to create ways in which women can be empowered; women of all backgrounds coming together regardless of where they might live, pray or to which religion they might be attached.The organization provides different courses and academic programs with the underlying goal that through the power of women we can bring peace and coexistence to the world.”The program, which began in Acre, a city with a highly diverse population of both Arabs and Jews, has since spread around the North while becoming a model for programs in other parts of the country and even abroad.“I truly believe that this is an approach and a vision that can succeed all over the world and create a feeling of peace and unity amongst different people, even those who might find themselves in conflict with one another.”Challenged as to why she believes that specifically women are the key to world peace, Faraj Falah answers without hesitation, “As those who bring life into the world, women will never give up in creating a better life for their children.”Speaking of the many Israeli mothers who she has had the chance to work with she says that every mother wishes that her son or daughter should never have to go off to war.“Every woman has the natural urge to foster a world that is more peaceful for her children.”Living in Israel and witnessing the nation’s conflicts and wars has not changed her perspective.“Even in the hardest times I remain optimistic because without optimism in our world, we will never be able to accomplish difficult things,” she says, while stressing, “I will always choose to see the glass as half full because that is the only outlook that will allow people to make real positive change.”She further says that Israel offers the chance to create a peaceful society specifically because it is such a small country with such a diverse population.“The reality is that despite what is often broadcast to the world, in the daily life of many Israelis there is a sense of a blossoming mosaic where people are naturally good and live together with one another in harmony.”On June 7 at the President’s Residence in Jerusalem, Faraj Falah will be among the recipients of the Jerusalem Unity Prize created by Jerusalem Mayor Nir Barkat and Gesher in memory of the three teens kidnapped and murdered in the summer of 2014. She describes it as a great privilege and honor to be the first non-Jew selected for the prize.“In being awarded this prize, which serves as such an important way to highlight the unity that came out of the tragedy of these three boys’ deaths, I feel it strengthens my work and gives me the further conviction to spread this message of unity to new communities both here in Israel and abroad.”

■ For more information about the Jerusalem Unity Prize and Unity Day, visit www.unityprize.org.
Advertisement
Subscribe for our daily newsletter