Critics of the kingdom 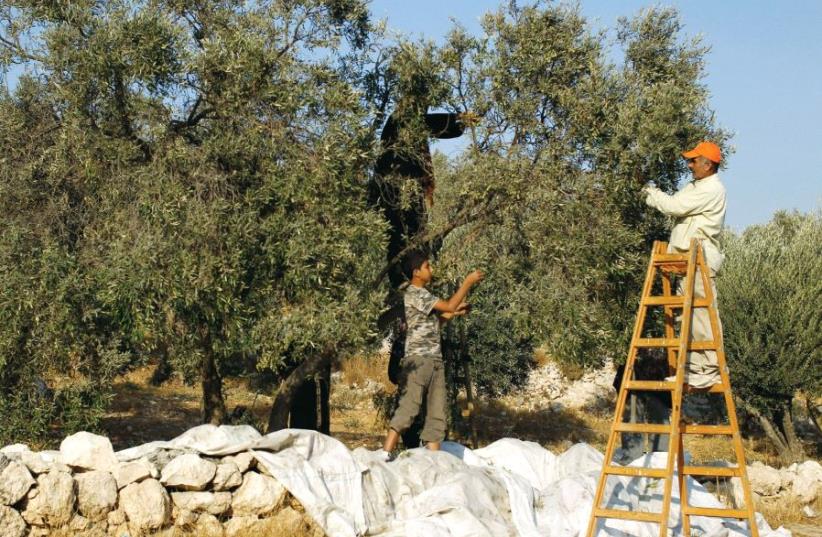 Members of the Fatafta family pick olives in their orchard during harvest season near Hebron in 2012
(photo credit: AMMAR AWAD / REUTERS)
Advertisement
After novelist Ayelet Waldman appeared at the 2014 Jerusalem International Writers’ Festival, she met with members of the controversial NGO Breaking the Silence, who took her on a tour of Hebron.The trip had such a profound effect on her that she and her husband, novelist Michael Chabon, wound up editing a book that “we didn’t want to edit,” they write in the introduction to Kingdom of Olives and Ash: Writers Confront the Occupation.

They were happy to be disengaged from the Israeli-Palestinian conflict, but Waldman felt she could not ignore what she had seen in Hebron and put out a call to authors to visit east Jerusalem, the West Bank or Gaza and write about their experiences.Over the next few years, the submissions began to roll in. The result was widespread interest. Kingdom of Olives and Ash contains 26 essays from authors hailing from every continent except for Antarctica.The book, released to coincide with the 50th anniversary of Israel’s victory in the 1967 Six Day War, when it took control of the West Bank, opens with an account by Geraldine Brooks (People of the Book, The Secret Chord) of the shocking case of Hassan Manasra, then 15, and his brother Ahmed, 13 at the time, two Palestinians living in Beit Hanina who carried out a stabbing attack in Pisgat Ze’ev in 2015. The result was two injured Israelis, a 12-year jail sentence for Ahmed and the death at the scene of Hassan. Just like that, with the very first whirlwind of a story, you’re down the rabbit hole.“Foreigners writing about the conflict,” you might say, with an eye roll. But often these authors provide such beautiful prose that it could have come out of a Yehuda Amichai or Mahmoud Darwish poem. And regardless of your position on the conflict, these polished and award-winning authors write in a way that is a pleasure to read.American novelist Emily Rabouteau describes “parched olive trees growing at strange angles from the rind of the earth,” which she saw during her visit to the South Hebron Hills.Irish author Colm Toibin writes, before ever having visited Jericho – because people told him it simply wasn’t worth visiting – that he “imagined ancient mosques and Coptic churches and even older signs of habitation, a rich archaeology, places where Cleopatra and Antony had lingered, places haunted by the snarling echoes of Herod’s voice, the place where Jesus had cured the blind beggars. I imagined calm, shaded squares with palm trees and coffee shops…” The essays deal with issues as intractable as Hebron and as seemingly frivolous as soccer (Israeli author Assaf Gavron’s masterful piece on the Palestinian National Team, head of the Palestinian Football Association Jibril Rajoub and the politics of soccer in Israel/Palestine is a joy to read.) These authors aren’t anti-Israel fanatics.Mario Vargas Llosa, the Nobel Prize-winning Peruvian writer, recounts arguing with colleagues in the 1970s in support of Israel, when it wasn’t particularly fashionable to do so. Norwegian Lars Saabye Christensen writes, “I am a friend of Israel. I am willing to go far to be Israel’s friend. It implies that I quite simply recognize Israel’s obvious right to exist, today, in the future. It implies Israel’s duty to defend itself,” after acknowledging that again, as a European writer, it’s not a popular thing to say. But he continues, “[This] does not imply the right to torment people. There is no such right. No one has the right to do wrong.”These commonly voiced views contribute to one of two recurring themes that come up; that these authors are choosing to speak out in order to save Israel from itself.The other being that so often, as Gavron puts it, “in the name of security, the nation often loses its way.”One issue with the book is that if you’re familiar with the conflict, you will recognize the names of many of the interviewees and subjects of essays. Hanna Berg, for instance, the 81-year-old Israeli who protests outside the Kalandiya checkpoint nearly every day, appears in multiple essays.And if you know anything about the weekly Nabi Salih protests, you will, of course know of the Tamimi clan who organizes the protests and whose members are interviewed.But at the same time, Dave Eggers, in his trip to Gaza, introduces us to a couple who simply doesn’t fit in Gaza, and who are trying to get to America. Raja Shehadeh writes about his friend, a taxi driver whose patience to deal with arbitrary checkpoints is Buddha-like. Chabon writes about two-meter-tall Palestinian- American businessman Sam Bahour in an essay called “Giant in a Cage.” Their stories are being heard by the outside world, likely for the first time.Royalties from the book will be donated to Breaking the Silence, and Youth Against Settlements – the latter is a Palestinian NGO in Hebron.