What it's like for Arabs looking for housing in Jerusalem. 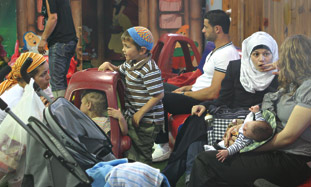 By law, only Israeli citizens and foreign residents eligible toimmigrate under the Law of Return – i.e. foreign Jews – are entitled tobuy state-controlled land. Ir Amim estimates that 80% of the land inJerusalem available for housing is state-controlled – an estimate themunicipality doesn’t challenge – with much of the remaining, privatelyowned land being taken up by old haredi neighborhoods that Arabs aren’tabout to try moving into.This means that while foreign Jews can and do buy land anywhere inJerusalem from whoever will sell it to them, foreign gentiles,including Arabs, can buy in only limited, privately owned parts of thecity, says Cohen. And now that additional state land is due to be soldoff, the Knesset has given preliminary approval to a bill granting thehousing minister veto power over any such sale if he deems the buyer tobe “hostile” to the state.Regarding the home-buying rights of Palestinians living in eastJerusalem, Barkat told Sky News they all have a “path” to legalequality with Jews: “Any resident in the city of Jerusalem can become acitizen and live anywhere he wants,” he noted.There are 303,000 Palestinians living in east Jerusalem. Some 12,000have taken out Israeli citizenship, according to the Jerusalem Centerfor Israel Studies. The remaining 291,000 have not.So does Barkat encourage these 291,000 Palestinians in east Jerusalemto take out Israeli citizenship so they, too, will become legallyentitled to buy, build and live in any neighborhood of the city?Replies mayoral spokesman Miller: “It’s a personal decision for the residents to make themselves.”
Advertisement
Subscribe for our daily newsletter