In spite of much-ballyhooed security concerns, the ‘Magazine’ tours the land of the pharaohs, eyeballs Ramses II and begins to relax with present-day Egyptians. 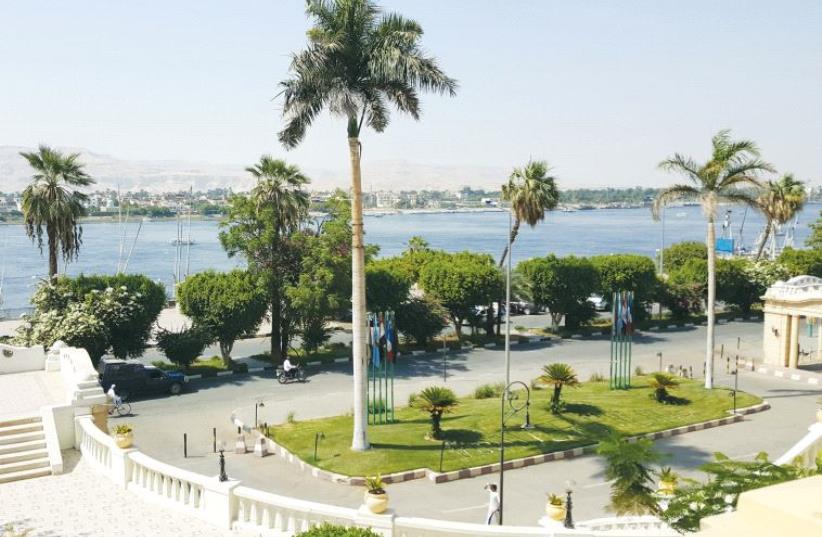 A view of Luxor’s West Bank
(photo credit: BEN FISHER)
Advertisement
The ticket agent at Ben-Gurion Airport chuckled and shook his head when I told him I was flying to Cairo. “Egypt?! What are you doing there?” he asked incredulously. “I’m going to see the sights!” I said. He laughed and shook his head again.When you fly direct to Cairo, it’s on a small, unmarked plane, an Embraer 170.Technically, the plane is owned and operated by EgyptAir, but you wouldn’t guess it by looking at the nondescript blue and white exterior. It operates as a subsidiary called Air Sinai, an airline you won’t find on Kayak and Google Flights.Rather, you have to call and wire money to the airline in order to purchase a ticket.The majority on the flight to Cairo seemed to be Arab Israelis and a group of Christian pilgrims en route to their homes in South Africa. A handful of elderly tourists sat in what looked to be a very spartan first class. Two uniformed air marshals sat in the first row and slept the whole way.In the 12 months prior to my flight, Egypt had endured or been the cause of a long list of deadly events: The downing of a Russian jet – apparently by an Islamic State bomb – which took off from Sharm e-Sheikh, the crash of a Cairo-bound EgyptAir plane from Paris (traces of TNT were found on the wreckage), the aerial bombardment and killing of eight Mexican tourists by the government because they had been mistaken for terrorists hiding out in the Western Desert, the Islamic State beheading of a Croatian oil worker, and the abduction, brutal torture and murder of an Italian graduate student who was studying labor unions at the American University in Cairo (the jury is still out on this one, but signs point to over-zealous police or security forces).His body was so disfigured that his mother could identify him only by the tip of his nose. Add these to an insurgency in Sinai, an attempted suicide bombing at Karnak Temple in Luxor, and one would have more than enough reasons to never visit the country.SO, WHY Egypt? My grandfather was a professor at the American University in Cairo in the 1980s. I grew up with childhood tales about the period my grandparents, my mom and her siblings spent there. Stories of baksheeshing their way around the Egyptian capital and their visits to desert oases and dusty, low-ceilinged tombs in the Valley of the Kings captured my imagination. In 2015, I made aliya, and suddenly the country that had so fascinated me as a child replaced Canada as my country of residence’s neighbor.Another push in that direction was my work in the bar at the Abraham Hostel in Jerusalem. Every few weeks I’d talk to a traveler who had come from Egypt or was going there. I’d pick their brains for a bit and always tell them, “I want to go there more than anywhere else in the world, but I don’t know whether I should go now, before the situation gets worse, or to wait until it gets better.”One Friday afternoon, after perusing a Lonely Planet Egypt guidebook in east Jerusalem’s Educational Bookstore, I pulled the trigger on the plane ticket, and that was that. 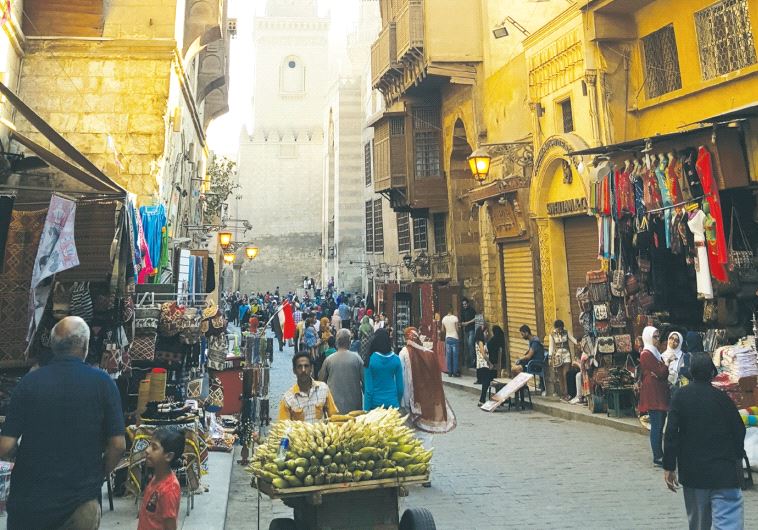 Bustling Khan el-Khalili market in Cairo (photo credit: BEN FISHER)
As in many similar cases, once you arrive, you quickly realize the situation in Egypt isn’t as bad as some would have you believe. The Egyptian government, which relies heavily on tourist dollars, has taken the aforementioned bloodshed seriously and has implemented practices to ensure that there aren’t repeat attacks. Somewhat bizarrely, upon leaving the Cairo International Airport, your passport is inspected and your bags are scanned. There are bomb-sniffing dogs at every hotel, and at Karnak Temple there are three metal detectors to pass through before one can gain entrance to the magnificent site, which holds the Temple of Amun, the largest religious building ever constructed.Though the drop in tourism resulted in being able to stay in gorgeous, colonial- era hotels along the Nile and in the shadow of the Pyramids at a deep discount, the famous sites weren’t as desolate as I was expecting. The Pyramids were packed, mostly with Egyptians celebrating the end of Eid al-Adha, but there were plenty of sun umbrellas and selfie sticks wielded by Chinese tourists, as well as Germans and Spaniards astride camels strutting down the Giza plateau. I spent time by myself inside King Tutankhamun’s tomb, but in the boarding line for my flight to Luxor earlier that morning, I was sandwiched between Argentineans and British couples, with Japanese and Mexican sightseers in front of and behind them.One day, I rode in a 4 a.m. police convoy that takes tourists from the southern city of Aswan to the magnificent rock-hewn temples at Abu Simbel built by Ramses II, just a stone’s throw from the border with Sudan. No one was able to explain why tourists must be escorted by police. Unlike at the Temple of Hatshepsut in Luxor, where a 1997 massacre by Al-Gama’a al-Islamiyya killed 62 people, there have not been terrorist attacks at or near Abu Simbel. 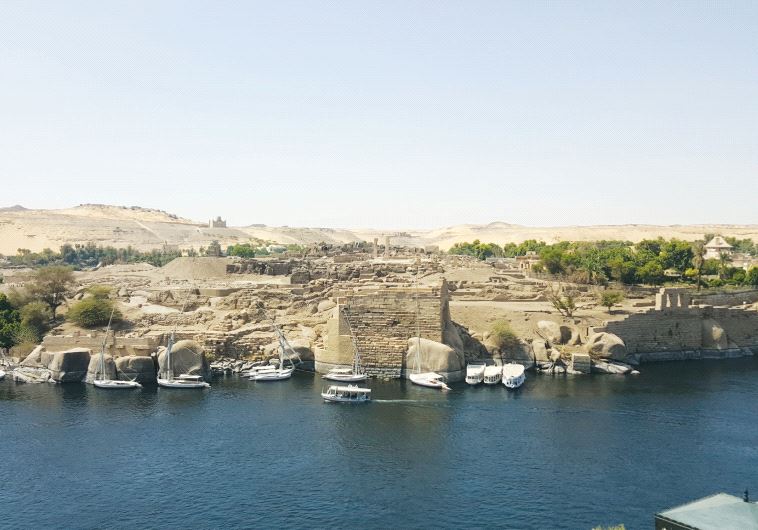 Feluccas drop anchor at Elephantine Island in Aswan (photo credit: BEN FISHER)
A guide said that the escort was to control the speed of the drivers. This didn’t explain why the dozens of policemen at the front and back of the group were armed to the teeth.In any case, the three-and-a-half-hour drive passed without incident. On arrival, one of the first things you see is the four-meter-high seated statues of the pharaoh, which guard the entrance of the temple. A person is the same height as any of the statue’s hands, and the pharaohs gaze across Lake Nasser, slight smiles on all of their faces, into eternity. 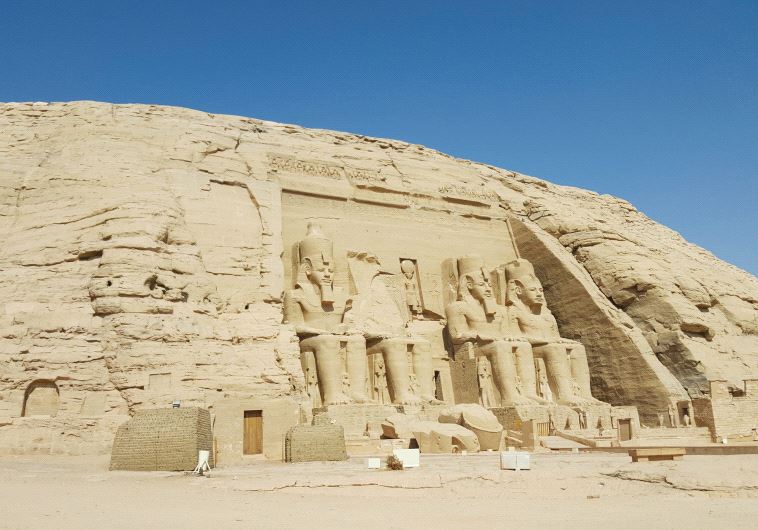 Four colossal statues of Ramses II guard his temple at Abu Simbel (photo credit: BEN FISHER)
Just days before, at the Egyptian Museum in Cairo, I’d seen the 3,000-year-old mummy of the man who commissioned the temples. Ramses II, thought by many to be the pharaoh of the Exodus, was carefully unwrapped after his mummy was found in the late 19th century. Today he lies in the museum’s Royal Mummies Room. You can visit the tombs of history’s many great leaders, but, with very few exceptions (Lenin and Ho Chi Minh, for example), the presidents, prime ministers, kings, queens and generals are six feet under. To look upon the man himself, not an obelisk or a tombstone over a concealed coffin, was well worth the anxiety before the trip, and the dozens of security checks and Cairo’s smog.NEARLY EVERYONE in Egypt wants to sell you something, and the rest want to take a photo with you. At first, one of my grandfather’s life mottoes popped into my head: “Eternal vigilance!” “Hands in your pockets,” I told myself the first few times. “Guard your phone and wallet.”But after snapping shots with veiled teenage girls, Cairene college students too starstruck to speak to an American, and entire families who placed me in the middle of the shot, I began to let my guard down when I realized that no one had the intention of running off with any of my belongings.While waiting at the Luxor train station before the three-hour ride to Aswan as the only Caucasian on the platform, a mother pushed her son over to me for a picture. She’d been trying to persuade him to come over on his own accord for a half-hour to no avail. He looked to be about four and was terrified and bawling.“Mish mushkila!” I told him. “No problem!” The tears kept flowing. His mother pointed to the boy’s father who was at a kiosk on the other side of the platform. “Your dad is over there buying you an ice cream,” she told him through gritted teeth, “So you’d better smile!” He didn’t. She took the photo anyway.Five minutes later he was enjoying his popsicle, smiling at me from the safety of his mother’s lap.TO SAY that Egypt has been through a rough patch recently is an understatement, and there’s plenty to criticize about the government that gains support from our tourist dollars.And yes, the Pyramids will always be there, but other sites for which Egypt is famous won’t. Antiquities authorities have decided to close King Tut’s tomb to visitors, due to a fungus caused by humidity from the sweat of thousands of tourists that is damaging the delicate wall paintings. An exact replica will be placed by the site, but at some point in the next few years the boy king’s original resting place will be closed for good.Persistent and overwhelming as they may be, the Egyptians who sell camel rides, bottles of water and trinkets at tourist sites have borne the brunt of the tourist downturn. They have families to feed and bills to pay.So go to Egypt, and treat yourself to a tacky carving of Nefertiti and a checkered scarf. I didn’t feel unsafe once. See the sites; you may be lucky and have many of them to yourself.
Advertisement
Subscribe for our daily newsletter