How a life-loving ‘all-around good guy’ became a brand ambassador for enterprises and for Israel. 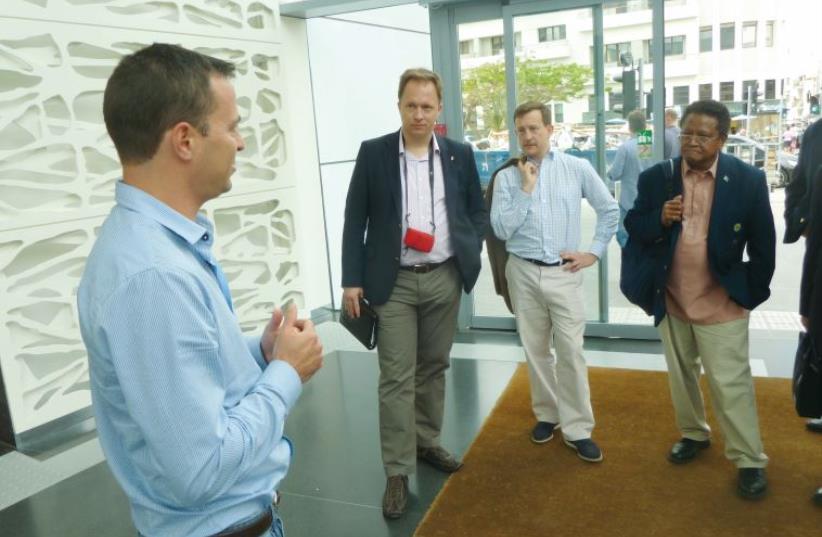 Gilad Carni (left) welcomes a delegation of New York-based diplomatic ambassadors and consul generals for a week-long American Jewish Committee seminar on Israel, in May 2015
(photo credit: AJC)
Advertisement
People often complain that Israel lags behind in hasbara – public diplomacy, public relations, or however you prefer to translate the term that literally means “explanation.”Gilad Carni is one of the few actively working to solve the problem.Born in 1974, Carni has the advantage of having spent roughly half his life in Israel and half in the United States, giving him fluency in Hebrew and English languages as well as Israeli and American culture.And he personifies the “start-up nation” story, having founded and sold two companies and invested in an Israeli start-up later acquired by Google, among other accomplishments.“As a successful entrepreneur, I believe I have some responsibility in shaping world opinion about Israel,” he says. “I have taken part in numerous TV shows and films on the start-up nation because I want to show the world a different face of Israel and its start-up ecosystem. I talk to a lot of missions that come on Project Interchange, and I work with the city of Tel Aviv on missions that come here as well.”Project Interchange, an educational institute of the American Jewish Committee (AJC), brings opinion leaders and policy-makers to Israel for a week of intensive travel and learning. Carni participated in the ACCESS Israel delegation to the AJC Global Forum last June in Washington, DC, as one of 100 Israeli Jewish, Muslim and Christian members of the Forum, which promotes advocacy for Israel through informal contact with 80 young diplomats from 36 countries.Carni finds that touring Israel is a transformative experience for first-time visitors. “Once they see it, feel it and taste it, they’re sold. And when you’re abroad at a trade show or a conference, it’s obvious that people know Israel has good innovation and they’re already sold on it.”Political diplomacy, on the other hand, is an uphill battle. He recently went on a mission of young world leaders to the European Parliament in a group with Israelis, Jordanians, Egyptians, Lebanese and residents of the Palestinian Authority.“It was the hardest week of my life, not because of our neighbors, but because of what I heard from the Europeans,” he admits. “Something I see as white, they see as black. Arguing politics is very frustrating. But I think we shouldn’t be afraid to voice our opinion. We can tackle BDS by confronting kids at colleges and universities with hard facts and not just taglines. When you introduce facts, you can have real conversation, debate and discussion.”A Haifa native, Carni was 12 when his family relocated to New York because of his father’s job. He voluntarily came back to Israel to do his military duty at 18, serving as a criminal investigator in the Military Police. Carni parlayed that experience into a short stint as a private investigator for businesses before moving back to the US for college.After earning an MBA in international marketing and entrepreneurship from the University of South Florida, Carni took a job at Philip Morris managing event marketing for the Marlboro Red cigarette brand in New York City. One year was enough to jump-start his entrepreneurial career in an unexpected way.“Part of my responsibility at Philip Morris was to hire ‘brand ambassadors’ for trade shows and events nationwide. All the vendors I worked with were low-tech, regional and unimpressive, so I left and opened my own online promotional staffing agency in 2001 and sold it in 2007,” he explains.GC Marketing Services now boasts a nationwide database of some 80,000 brand ambassadors available for direct hire across the US. Earlier this year, Carni re-bought the company and manages it from Israel.“A big part of why I sold was because I wanted to move back to Israel. I was single at the time and didn’t want to marry someone from Long Island and come to Israel once a year,” he says.Upon returning to Israel in late 2007, Carni started investing in Israeli startups with other angel investors from Israel and the US. “I was very lucky to be part of the first investor group in Lab- Pixies, the first Israeli company bought by Google.”Speaking of good luck, Carni was followed back to Israel by the rest of his immediate family and now lives in Tel Aviv with his wife, Adi, a Transportation Ministry project manager, and their two-year-old daughter, Yuval.In 2010, he co-founded ChatVibes, the first two-way browser-based voice and video add-on for Facebook. By the end of 2011, when Carni sold out to an international Internet company, ChatVibes had been downloaded 30 million times and was the second most popular Chrome extension on Google’s Webstore.After work hours, Carni can be found either swimming or on duty as a volunteer policeman and United Hatzalah emergency medical technician in his Tel Aviv neighborhood.“When I moved back to Israel, I befriended a Holocaust survivor living next door. Every afternoon she waited for me after work to help her with minor chores around the house. One day she got robbed and beaten and I went to the police with her. I was full of rage and that’s why I decided to volunteer,” he explains. “It kind of grew on me.”Describing himself as “Israeli, life-loving and an all-around good guy,” Carni says that he intends to continue his active involvement in the Israeli hi-tech ecosystem and in hasbara programs promoting Israel.His role models, he says, “are the Israeli entrepreneurs who cope with serving in the army reserves, paying taxes, volunteering and yet creating amazing companies that create jobs for other Israelis while exporting Israeli innovation all over the world.”