Home Design: Her piece of peace

The house is a very special Bauhaus- era building and ambassadors have been keen to showcase it. 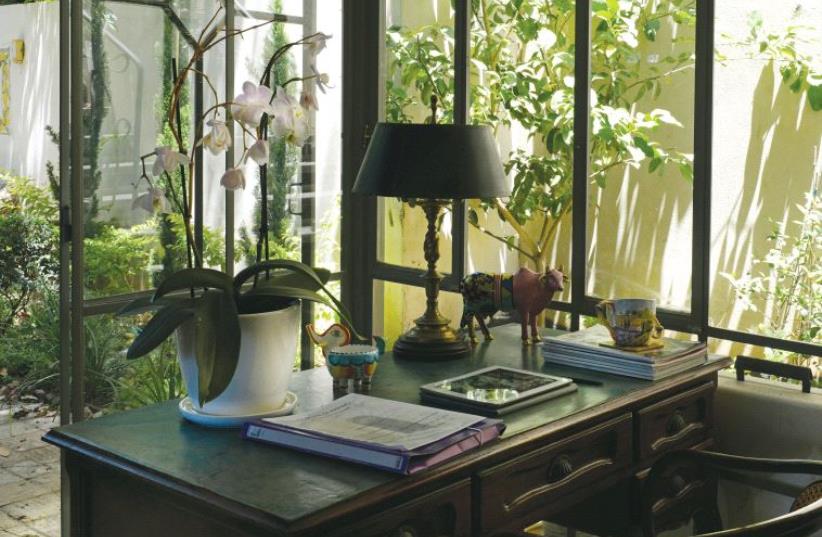 KIM LINDY’S antique mahogany desk in her home in Ramat Hasharon.
(photo credit: URIEL MESSA)
Advertisement
In the many years the “Homes” articles have appeared in The Jerusalem Post – close to 15 – only one home has appeared twice, that of the British Embassy residence.This may be because it’s a very special Bauhaus- era building and ambassadors have been keen to showcase it.But over the years the urge to revisit another home, that of Kim Lindy in Ramat Hasharon, grew stronger and stronger. It haunted the memory, a picturesque corner of Tuscany or Provence recreated in Israel, with its wild, overgrown garden and colorful, rustic interior.A call to Lindy established that she is still here and still living in the same house.“It’s all 10 years older,” she says with a laugh, “but you are welcome to come and photograph it again.”Lindy is a single mother and works as an organizational consultant.“I manage and protect intellectual property,” she explains.Originally from Philadelphia, she came here in 1980, raised two daughters and divorced.The house sits on 500 square meters of land in a prestigious area. How did she do it? “It was 2004, the year of the second intifada,” she explains. “It was the lowest point for property in Israel, so I was able to buy it.”The house, built in 1954 (“It’s the same age as me,” she says), had belonged to the parents of a wounded veteran of the War of Independence.“That explains why every room has an entrance from outside, to allow for a wheelchair,” she says.Not being allowed to make structural changes, Lindy set about putting her own stamp on the home.“I call it my Tuscan piece of peace,” she says of the back garden.Limiting herself to buying only blue-andwhite as far as possible, she had the back garden tiled in rough terra-cotta tiles and found a weathered-looking fountain in one of the garden accessory shops nearby. The rattan furniture came from a local store, and the tile inset on the high dividing wall brings a cheerful note of color with its vivid border of lemons.Ultimately, it was the old gnarled tree in the garden that was the reason she bought the house, she says.“It’s a jacaranda and is covered in ivy with beautiful blue flowers in the spring. It reminded me so much of Philadelphia; I saw it and said ‘This is my home,’” she recalls.In the rear balcony she replaced the ’80s aluminum siding with modern Belgian profiles in olive green. The glass is enhanced by two stained-glass windows depicting a bird on a branch of a tree in blossom.“I bought them in the Paris flea market and carried them home in hand luggage,” she says. “I was told they came from an 18th-century villa in the south of France.”The yellow table – another flea market find, only this time in Israel – had its Formica top removed, and the whole thing was repainted.“I liked the barley sugar legs,” she says. The old chairs also came from Jaffa and were painted white.The outer staircase with its hanging baskets of flowers leads to a prefabricated second floor. It had been a small apartment for one of her daughters, which she now rents out to lodgers. On the other side her daughter runs a bilingual kindergarten.“It’s the only English-speaking gan in Ramat Hasharon,” she tells me.“This is a working house,” Lindy says.Walking through the front door, one immediately notices a desk and laptop which bear out her claim.“Yes, this is my office,” she says.The desk is an antique – mahogany with a green leather top, and the lamp came from a Jerusalem yard sale many years ago.The lounge sofa is olive green and custom- made to fit the space. A variety of cushions adds to the comfort of the couch.The off-white kitchen has a large cooking range and a wall of yellow textured bricks.“They are there to cover a supporting column,” she says. “The same bricks are used in the outside path leading to the gan.”In the dining room a solid wooden table is held up with legs made from a ship’s wheel.“As with everything else in my house, nobody else wanted it,” laughs Lindy. The table was originally very expensive but was slashed to a reasonable price in the very fancy shop where she found it.“It works for me,” she says. “It fits perfectly into the narrow space and can easily seat 10.”The walls are painted in a lime wash, and the attractive wooden doors are really trompe l’oeil, concealing a very prosaic electricity cupboard. The pink and tartan chairs came from a flea market years ago.The paintings on the dining room wall are what remain of a failed attempt to start an art business here.“I met a fabulous artist in Florence and brought over many of his paintings on wood to sell. It didn’t quite take off,” she says with a smile.On her desk one can see some architectural plans for an ornate building.“Oh, that’s the palazzo in Italy I’m working on now,” says Lindy.That sounds very like another story for another day.