"You can change the country in which you live, your religion, your language – even your gender. But the one thing that you can’t change is your ethnic identity."

By ALAN ROSENBAUM, MAAYAN JAFFE-HOFFMAN
Irina Nevlin, author
(photo credit: YANAI YECHIEL)
Advertisement
The Internet and social media touch every aspect of our lives and are expected to have a growing impact.
“The Internet is ultimately the democratization of knowledge,” said Irina Nevzlin, an Israeli entrepreneur and author of the book The Impact of Identity – The Power of Knowing Who You Are. “The Internet has made irrelevant a lot of the systems we are used to. As such, most of us live feeling that the world is not how it was before, but we don’t know what it is going to be.”
Identities have become much more difficult to define, Nevzlin explained. Yet, she said it is defining and understanding one’s ethnic identity that can provide a needed base and stability in a world that is changing quickly.
“This is not a crisis,” Nevzlin said. “We just need to figure it out.”
And so, she wrote her book to help people have the important conversation about who they are and where they belong – a conversation she believes should start with their parents from “a very early age.
“Any other identity in your life can be changed,” she explained. “You can change the country in which you live, your religion, your language – even your gender,” Nevzlin said. “But the one thing that you can’t change is your ethnic identity. If you are born Italian, you will die Italian. It is the one place that is forever yours. Even if you decide to change it, you cannot.
“If you want to be stronger, more grounded and better balanced, you’d better connect to that part which is unchangeable,” she stressed.
THIS REALIZATION was one that came to Nevzlin not by choice, but chance. Born to Jewish parents in Communist Russia in 1978, she was a preteen when the Iron Curtain fell.
“I didn’t even know I was Jewish until the age of seven, when someone in my school called me a Jew using a derogatory term,” she wrote in her book. “My grandmother, who was a teacher at the school, felt compelled to tell me the truth about my identity. ‘I am going to tell you two things,’ she said to me. ‘There are two Jews in this entire school. You and me. And we are not going to say another word about it ever again.’
“It was a defining moment for me.”
She said her Jewish story is like that of her parents and grandparents, who also knew little about what it meant to be Jewish.
“It seems very outrageous today, but in the environment of the Soviet Union, it was something very normal,” she said.
Nevzlin told The Jerusalem Post that there were advantages and disadvantages to such an upbringing. On one hand, not being told about her identity instigated a curiosity in her to find out who she was and to connect to her roots, to make them her own. She said this made her stronger and more resilient.
On the other hand, she said she missed so many important years of her Jewish life that she cannot get back.
“I continuously examined the cultural norms around me – not by choice, but because I was forced to by my surroundings,” she said. “If you are born like everyone else, with the same type of parents, job and education, then you don’t need to ask yourselves questions about who you are, because you are like everyone else. For me, the notion of being different ignited a lifelong learning process about myself.”
At the age of 13, Nevzlin decided to study in a Jewish school, which she notes was the first time that she took responsibility for herself and her identity. Twelve years later, at the age of 25, she moved to London and again, facing an unfamiliar society as an outsider, had to define her identity yet again.
In her book, Nevzlin documents these experiences and helps readers in a passionate and engaging way to see the importance of developing and preserving both self-identity and collective identity, and how developing these two identities are essential skills required in order to live a life of meaning.
Understanding one’s identity, Nevzlin said, is a process, not an end result.
“It involves a complex, ongoing and dynamic strategy of asking, thinking, making choices and taking responsibility for the results,” she wrote. “One’s personal identity defines who we are and how we define ourselves as individuals. Knowing who we truly are is the ultimate freedom.”
Nevzlin believes that minorities and immigrants develop certain skill sets, due to their life choices and their position on the fringes of society.
“As an immigrant, you have no choice when moving to another country to make 100 decisions on things that are very superficial – like where do I buy the milk I like – to meaningful decisions – like who are my friends and what kinds of people do I want in my life,” she told the Post. “Immigrants have to make choices every minute; they have to build their lives.”
Another skill that immigrants pick up is a second – or in her case, third – language. She speaks Russian, English and Hebrew and said that adding another language beyond one’s native tongue “opens your mind, your brain to different cultures. We live in a world where cultures clash with each other at every moment, everywhere.” 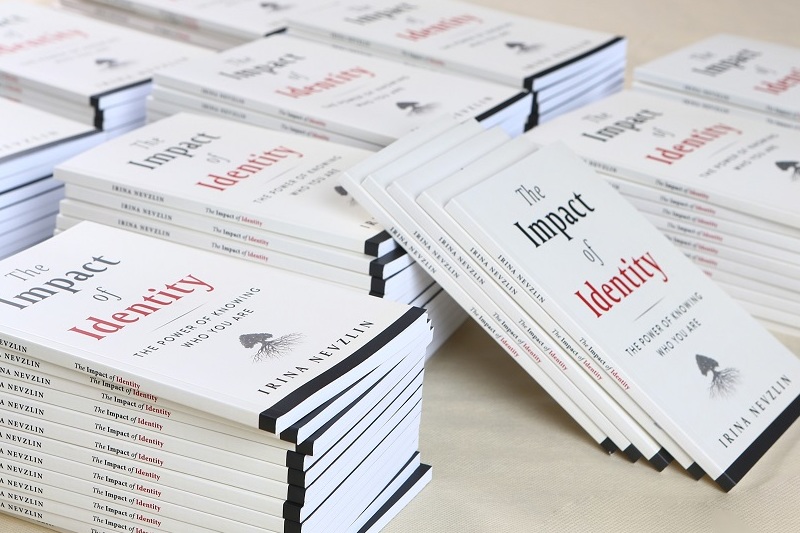 The Impact of Identity – The Power of Knowing Who You Are (Photo: Yanai Yechiel)
NEVZLIN, OF course, is someone that proves her methodology brings results. Aside from writing The Impact of Identity, the author impacts the world and the Jewish people in many ways daily.
Nevzlin serves as chair of the board of directors of the Museum of the Jewish People at Beit Hatfutsot in Tel Aviv. In this role, she helps connect people to their collective identities so that they can become stronger and more resilient. The idea of the Museum was introduced to her by her father after Arik Sharon approached him and asked for his assistance in saving this important organization.
Together with the museum team, she conducted a comprehensive, bottom-up transformation of the then-Diaspora Museum, which, under her guidance, developed into today’s Museum of the Jewish People. Her bold leadership during the re-branding of the museum helped it establish a novel paradigm of what it means to be Jewish.
“There is no one single place in the world that tells the entire story of the entire Jewish people,” she explained. “The idea of the Museum is for it to be a place that tells the story of the entire Jewish people, because in order to be together we need to know each other.”
Nevzlin encouraged the museum to place a greater emphasis on developing a sense of belonging among the Jewish people, on forging a stronger Jewish identity, on strengthening diverse ties connecting Jews throughout the world and on unifying Jews, while recognizing and celebrating the different narratives that reflect Jewish diversity.
She said that Jews often tell their shared history through stories of victimhood or suffering, but this is not the totality of the Jewish experience.
“We were also successful, creative, resilient, growing and influencing the world in so many ways,” Nevzlin said. “The story of our success is not told enough.”
The first section of the museum opened in 2016, and the second phase of the museum is due to be opened in October 2020, which will make the Museum of the Jewish People the largest Jewish museum in the world that tells the story of every Jew – past, present and future.
In addition to heading the Museum of the Jewish People, Nevzlin is the president of the Nadav Foundation, started in 2003 by her father, Leonid Nevzlin. The Nadav Foundation supports initiatives that promote understanding of the concept of Jewish peoplehood, build collective Jewish identity, and forge lasting ties between Jews around the world. Nadav’s flagship project is the Museum of the Jewish People.
IN 2016, she married Knesset Speaker Yuli Edelstein, also an immigrant from the former Soviet Union, who is known for having a similar drive to build Jewish peoplehood.
“What brought us together is love for Jewish people, as cliché as it may sound,” Nevzlin told the Post. “It is great to have a partner who shares your passion.”
She said that the Jewish people look different today than in the past, but they are no less Jewish and no less a people.
“We were a people for 5,000 years,” she said. “And we were a minority most of that time, until the establishment of the State of Israel 72 years ago. We were minorities scattered around the world, but what connected us was a set of ideas and values.”
Nevzlin recounted a significant experience in her own life that illustrates the importance of maintaining one’s roots and having a connection to one’s own group.
“I moved to London on a Thursday and began work on the following Monday,” she writes in her book. “On Friday afternoon, I was approached by a colleague, who said to me, with a twinkle in his eye, ‘Please come to our family for dinner tonight.’”
Nevzlin’s colleague had realized that she was Jewish, and had invited her for dinner, simply because she was Jewish.
“He invited me because he felt a responsibility, because I was a young Jewish professional alone in the city.”
Nevzlin said that the idea that she had an extended Jewish family wherever she might go, just because of her Jewish ethnic identity, was a transformative moment in her life.
“I know that I belong to something,” she said. “On a deeper level, I am not alone, but part of something, part of a network.”
She said that now that half of the Jewish people live in Israel, where they are the majority, and the other half still live as minorities, there needs to be a vision and a plan for connecting with one another. She said any plan must include education – Jews in Israel, she believes, do not learn enough about Jews in the Diaspora – and must include big ideas and values, but also “have very pragmatic language and understanding of the things that need to be done.”
In her book, Nevzlin discusses strategies that individuals can use to better shape their lives, including embracing change as an opportunity, learning to listen to one’s inner voice, taking responsibility for one’s life, and learning how to think critically. It raises issues regarding life in the 21st century, understanding identity and appreciating one’s origins that should prompt any readers to reexamine the lens by which they view their lives.
“Everything is about perspective, ultimately,” she said. “Reality is how you perceive it.
“There is a way of looking at things,” she continued. “I found a recipe, and what I am trying to do in my book is help people understand what that is and to transform the difficulties they went through to become potential leaders in this global world.”
The Impact of Identity: The Power of Knowing Who You Are is available on Amazon.
This article was written in cooperation with The Nadav Foundation.