Tel Aviv’s Tzahala neighborhood has long been associated with IDF big shots, but this couple came for the peaceful surroundings.

By GLORIA DEUTSCH
FEBRUARY 5, 2010 19:17
homes tzahala dining 311
(photo credit: Uriel Messa)
Advertisement
Tzahala, the neighborhood in northeast Tel Aviv, was founded in 1952 as an area where many of the country’s top brass could live in relative security, with the Kirya military headquarters a 10-minute drive away. All the legendary generals made their home in Tzahala, including Moshe Dayan and Ariel Sharon.The area was designed around the main street, Rehov Tzahal, which winds around the whole neighborhood and in the beginning had sentry boxes at each end, with tree-lined country roads branching off from the main artery.Although the population today is far from being exclusively military, it’s not the sort of place you would expect to find the owners of this house. She’s Swiss-born and comes from a small town near Basel. He’s a sabra doctor who studied in Switzerland, which is where he met his wife.“I’m not sure how we landed in Tzahala,” she says. “We were living in Haifa and came down to Tel Aviv every so often to look for a home. One turned up on one of these visits, so we bought it and my father-in-law didn’t speak to us for months. He had wanted us to pick an apartment in Ramat Aviv.”The family lived in the old cramped house from 1975 until four years ago when they decided to knock it down and start from scratch on the 600-square-meter plot of land.“It was ugly, old and dirty so I had no regrets,” says the owner. “We both had a large amount of antique furniture which we had inherited, and since I built the new house, I’ve acquired more pieces, but now we are able to accommodate everything and it doesn’t look crowded because we have so much space.”Once the three children grew up and moved out, they could design a home which would be just for them – comfortable, aesthetic, all on one level, each with his/her own retreat, a working kitchen for the large amount of entertaining they do and guest rooms for when visitors need to stay over.“It only took a year to build, which was very fast by local standards,” says the owner. “The concept was to build a square around a central corridor, with all the rooms branching off at the sides and front.”Although it was meant to be on one level, they both felt there was a certain waste of space in not building an upper floor, so in fact there is a staircase, made of smooth rounded marble, which leads up to one room, the husband’s study. Here the book-lined shelves and walls covered in fine prints testify to a lively interest in many other subjects beside medicine. 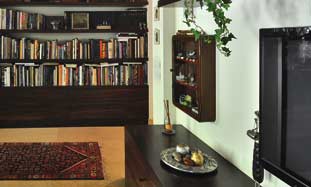 Both owners are born collectors although in the case of the wife most of her collections – like the demitasse cups, the pillboxes, the pewter steins and the old ceramic spice jars – are all inherited. The husband, however, started most of his collections alone. He has a sword collection, Bezalel artworks and a collection of masks which he wanted to put on the walls but his wife refused. And he is a compulsive art buyer, with paintings stacked on the floor because there are no more walls to hang them.ONCE THROUGH the heavy oak door at the front, the first thing one notices is the Swiss peasant cupboard hand-painted in a blue background with pink and red flowers which stands at the entrance and acts as a cloakroom. Several interesting artworks are on the walls, including a small Agam painting, and two Tumarkin prints in the guest bathroom. The hall is also big enough to accommodate a very large early 19th-century inlaid secretaire.Turning right into the corridor a huge dowry chest, dated 1734, stands against the wall. Lying on top is a Bible from the 1880s with original engravings by Gustav Dore. “This is where I keep my duvets in the summer,” confides the owner with a smile.Another old display cabinet, this one inherited by the husband, stands next to the stairs, full of old crystal and ornaments.Ahead one walks into the lounge which is surprisingly contemporary with beige and black sofas, a modern coffee table and two easy chairs in front of the wall-mounted plasma TV. A long sideboard holds a mixture of interesting items, including an old scale. Looking up to the shelves around the walls, one spots the Zinn pewter goblet collection and another of glass decanters.A wall of windows looks out onto a long narrow garden blooming with early spring flowers. The patio runs the entire length of the house and has a sitting corner at one side and an eating one at the other. The roof is made of solid chunky wood with bamboo sheeting.The dining room also came as an inheritance, a long oval table in inlaid light wood with chairs covered in flower-embossed velvet and a matching sideboard on which family photos are displayed.Conveniently next to the dining room is the kitchen, all white and airywith a central island for eating around and storage. On one wall, quitehigh up, is an unusual collage which consists of a cardboard cratefilled with tomatoes, and the owner tells me this is an Aliza Olmertcreation.“I don’t like cooking, but I do love entertaining,” the owner tells me, “so I had to have a very user-friendly kitchen.”Even the security room off the kitchen is put to good use as a laundryroom and pantry. One bedroom doubles as a gym, with the treadmill setup in front of the television, and a small room with a bed andbookshelves is a retreat for the owner, who would rather sit there thanin the lounge to read.“Even though it’s only the two of us most of the time, we use everycorner,” she says. And indeed, what with the friendly Labrador, Cooper,snuggled in his home under the stairs and the antique furniture atevery turn, the house has a comforting lived-in feel about it.