The IDF's Bardelas battalion and their passion to protect

The IDF’s coed Bardelas battalion secures the border with Sinai, protecting against ISIS and other threats.

By SETH J. FRANTZMAN
BARDELAS SOLDIERS near the Egyptian-Israel border: ‘We do something different every day.’
(photo credit: SETH J. FRANTZMAN)
Advertisement
When the men and women soldiers of the Bardelas battalion first came to the border, they lived in tents. Now they’ve settled in to a routine of a desert base, with caravans as offices and a fence to cordon off the area. Soldiers in uniform, M-16s slung over their shoulders are talking amid the heat of a pleasant October day. It’s fall on the Israel-Egyptian border and the local commander Lt.- Col. Shachar Nahmani is preparing to take his jeep out to visit some of soldiers in the field.Bardelas is the most recent of four coed battalions the Israel Defense Forces that have formed in the last decade and a half. Building on the success of the Caracal, which began as an experimental company- sized unit in 2000, the Bardelas deployed to Israel’s border with Egypt in July after two years of being based in the Arava on the Jordanian border. All of the coed units take their names from cats, including the “cheetah,” “sand cat,” the Lions of the Jordan and the levia habik’a, another type of cat. The Bardelas base is big on the iconography of the mascot, with images of cheetahs. One dusty, rusted caravan even has a mural of the cheetah with a knife in its mouth.The Bardelas base near Nitzana is located in the dry and rolling desert hills of the Negev. This area is slowly undergoing a kind of awakening with a new power station at Ashalim nesting among fields of solar panels. Near the archaeological site of Shivta, the IDF carries out frequent training in the desert.“We had training with tanks recently,” says Nahmani, the Bardelas commander. A former paratrooper and veteran officer in Caracal, he speaks with glowing admiration for the development of the coed combat battalions.“I love these units. The soldiers do really good work and activity every day. The best.”He says that the unit is made up of roughly equal numbers of men and women. Its goal up to this point has been carrying out security along the border, but it is expecting to be sent to the West Bank after serving in the Negev. This rotation will give it experience confronting different threats.Nachmani grabs his M-16 and a pair of binoculars and gets in the passenger seat of a black jeep before heading out to visit groups of his soldiers along the border. We drive out along a tarred road, past an old gas station and then pass greenhouses that belong to the communities of Nitzana, Kadesh Barnea and Be’er Milka. The disused road runs parallel to Route 10, the border road. Among these dunes, according to the Biblical account, the Israelites encamped in the Zin Desert and this is where the spies penetrated Canaan. Today things are reversed; it is the Israeli army guarding this border against any attempts to infiltrate and threaten the border communities. Although smuggling is a concern and up until the last few years there were refugees seeking to cross the Sinai to Israel, the main threat today is from ISIS-affiliate Wilayet Sinai. 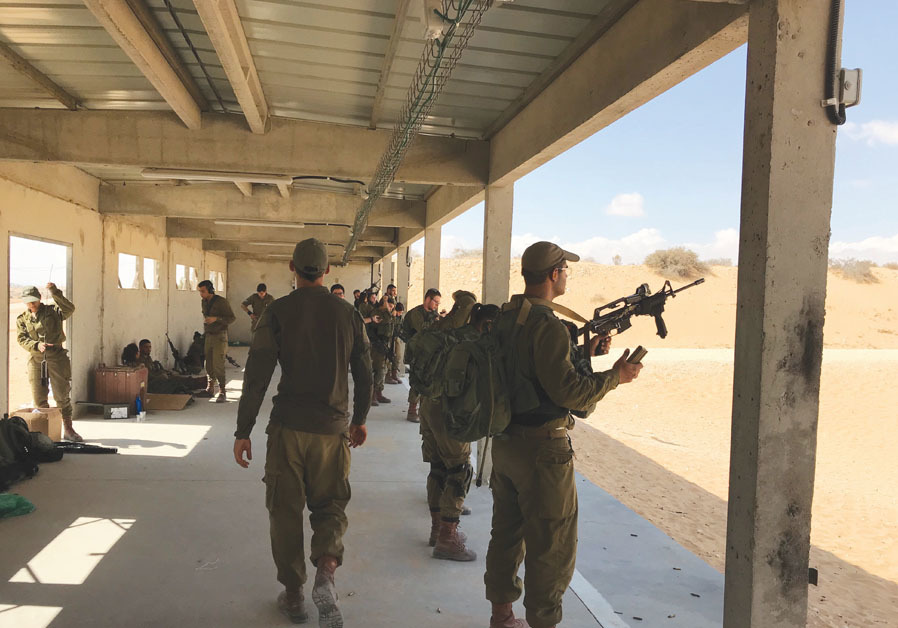 Firing at targets at a live-fire range near Nitzana. ( SETH J. FRANTZMAN)
NAHMANI DESCRIBES various activities of the unit in defense of the communities. These include patrols along the border 24 hours a day and close coordination with observation units and monitoring of the security fence that runs along Route 10. The soldiers of Bardelas use Humvees and other vehicles to carry out their duties. After 10 minutes of rocking along the sand dunes and disused road, our black jeep comes upon one of the squads of Nahmani’s soldiers observing the border. Sitting behind a small berm in front of a watchtower ringed with concrete blocks, the soldiers are watching the fence. On the other side is an Egyptian fort. It’s painted yellow with a pillbox and a tower within its concrete walls. In the distance, about a kilometer away, is another fort. The Egyptians have built these up and down the border, part of a series of measures to confront ISIS and other threats.Nahmani points to the fort and notes that its gate opens facing Israel and the security fence, rather than facing Sinai. It shows how the Israeli side is secure, while the threats would more likely come from ISIS deeper in the desert. Over the recent holiday of Sukkot, the IDF opened the border Route 10 to civilian traffic. Usually this road is closed for security reasons, but on Sukkot some 1,000 people came every day. Nahmani shows a video of motorcyclists in a convoy filmed from a drone. In the future, the road might be opened again so visitors can see the countryside and explore the border area. It is a sign that security has improved here.Four soldiers in the Humvee watching the border say they enjoy their service here. One of the women soldiers says she wanted to be in a combat unit and is glad units like this exist that offer her the opportunity. In recent weeks, the Bardelas had a training session where they practiced evacuating wounded.“We do something different every day,” says one of the soldiers. The idea is to be ready at all times for different threats. Although it has been quiet over the last months, the possibility of a terrorist attack is always a concern. Recently they had to confront smugglers who come up to the fence. Although the apprehension and prosecution of smugglers is left to the police, the IDF will intercept them if they are damaging or trying to cross the fence.“We always have something to do here. I remember weekends where I didn’t have time for a shower,” one soldier adds. “Today we are on the border until we are told to leave.”It’s similar to securing the border with Gaza, Nahmani says.The border fence with Gaza has been bolstered and heightened in recent years. Now it is eight meters high in sections.The entire border fence with Egypt is 242 kilometers long from Gaza to Eilat. Some sections include coiled barbed wire on each side, and an original as well as a heightened section. There is another layer of fencing on the other side of Route 10 in places. The dirt along the fence is also kept flattened so that anything crossing it can be tracked. Sensors and observation mean the fence has numerous active layers to determine if anyone has sought to cross.In early October, a crew was working to carry out maintenance on a part of the fence. Two men in a small metal basket were lifted over the fence and plopped down on the other side. They wore helmets in case anything happened. On the Israeli side, soldiers kept close watch over the work.“We don’t have to guard repairs of the fence often,” says Sec.-Lt. Raya, one of the Bardelas soldiers. “It’s unique actually.”Like her comrades, she says that she likes being in the coed unit.“It makes us stronger together.”She wanted to be a combat soldier. “I understood that I should do this to defend the country and not sit in an office.” A veteran of Caracal, she joined Bardelas four months ago.Nahmani says that his unit can do any of the activities of other combat units and stresses that the soldiers are qualified in diverse positions, such as having their own snipers.“We can meet any threat. Slowly, slowly we are expanding these units and guarding different areas of the country.” He thinks eventually they may be deployed in more places, although he doesn’t want to answer if that would include the border of Gaza or Lebanon, which face different threats than the border with Egypt and Jordan, where Israel has a peace treaty.On the way back from the fence maintenance, we pass the cherry tomato fields that stretch out to the horizon. There’s also wine being grown down here and other fruits of the land. There is a school for Bedouin youth near the border and pre-army courses. 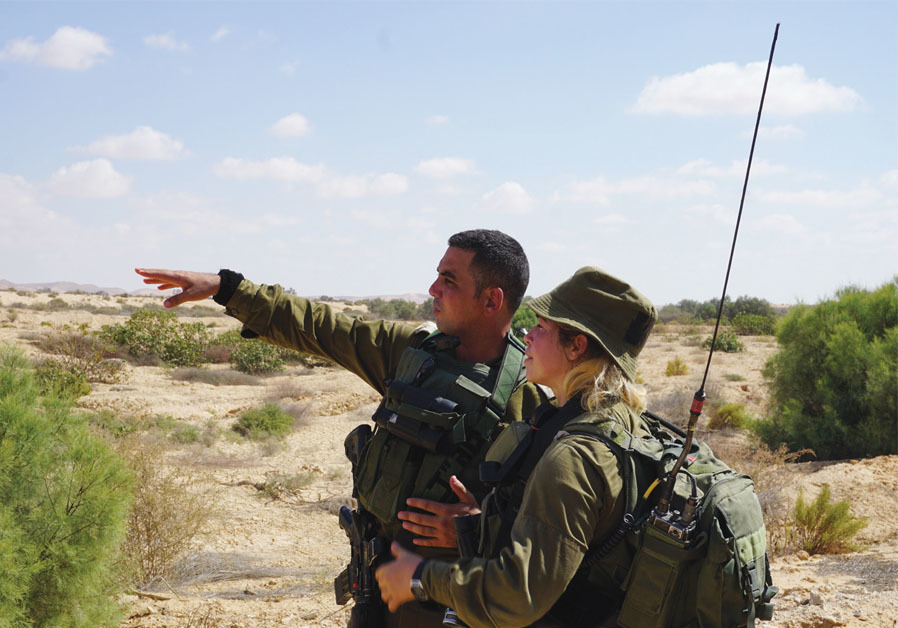 Meeting any threat: Commander Lt.-Col. Shahar Nachmani gestures at the border fence while speaking with one of the soldiers. ( SETH J. FRANTZMAN)
BACK AT the base, after visiting the fence, sergeant and combat medic Elana Arnold greets us in her office. An American immigrant from Baltimore, she came to Israel in 2016 and was drafted that year. In March, she came to Bardelas. A trained EMC in the US since the age of 16, she completed a training to be a combat medic in the IDF.“Basic training was a bit difficult,” she recalls. She got concussion from an accident but kept up the training.“I wanted to challenge myself and it wasn’t that bad. I have some physical ability, I can run and was able to pass it easily.”She says that soldiering on the border is interesting. Her M-16 against a wall beside her clean desk, she describes getting up at sunrise and going on patrols. Like her colleagues, she spends 11 days on base and three off during the service. It was quieter along the Jordanian border. Here there is more activity. Her duties include being in charge of public health and physicial therapy. That includes such details as making sure the soldiers keep the kitchen clean so people don’t get sick. A physical therapist also visits during the week and Arnold helps manage the schedule of which soldiers get therapy.One of the main issues the unit faces is dehydration. As winter arrives in the desert, some soldiers think they don’t need to drink as much water as during the scorching summer months.“I haven’t dealt with that in the field, but that might happen here between guard duties, so we might give them fluids, usually at the end of the days.”I ask about snakebites and scorpions and Arnold says she’s surprised that actually it hasn’t been an issue.“You’d think we would have more of those.”She finishes the army in August and plans to become a physical therapist after her service. The hardest part about the service so far? Being stuck in the middle of nowhere down by the border with a lack of transportation to get other places.Many of the soldiers say being in a coed unit isn’t particularly different than what they expected in the army.“I got used to the coed unit issue,” says Arnold. “They changed it a bit. In basic training, we were doing basic training together with girls and guys and now the classes are only girls or only guys. I think that makes it easier.”She says it was more complex to get everyone ready in the mornings because women and men slept separately in different parts of the training base.“In the unit itself, it’s a mix and it doesn’t make a difference, everyone does the same thing.”For her its normal being with the guys, but with one caveat: “The girls are smarter.”