Shadi Khatib talks with the ‘Magazine’ about the dilemmas facing the country’s smallest religious minority, the Nation-State Law, and the desire to be treated like an equal Israeli citizen.

NEW YORK Police Department officers conduct searches before the New York City Marathon on November 4: ‘US police don’t have the time or resources to do what technology could quickly get done.’SHADI KHATIB displays ‘The Druse alliance,’ a ‘Jerusalem Post’ article from 30 years ago featuring a photo o
(photo credit: JUDITH SUDILOVSKY)
Advertisement
It has been a few months since I first sat down with Shadi Khatib at a café in Jerusalem’s Ein Kerem neighborhood to discuss writing a retrospective on an article that appeared in The Jerusalem Post 30 years ago on the “The Druse alliance.” Written on the eve of Israel’s 40th Independence Day, the piece dubbed the Jewish-Druze relationship as one of “brotherhood and mutual aid,” despite the need to improve the social and economic conditions for the Druze.A picture of Khatib’s young, smiling grandparents dressed in traditional garb in their Rama village home takes up a quarter of the bottom first page of the two-page article. Though his grandparents were not interviewed for the article, the photograph – and a desire to track down the original – was the impetus for Khatib to reach out to the Post for another article in honor of Israel’s 70th anniversary.At our first meeting Khatib, 45, showed me pictures of his young son waving the Israeli flag during an Independence Day celebration in his Karmiel school and told me about the photography course he was taking in Tel Aviv. Just a few weeks later the Knesset would pass the controversial Nation-State Law, which establishes that “the right to exercise national determination in Israel is unique to the Jewish people,” that Jewish settlement is a “national value,” mandating the state to “encourage and promote its establishment and development.” The law also establishes Hebrew as Israel’s only official language, downgrading Arabic to a “special status.”Now one of Israel’s Basic Laws – something akin to a constitutional law which guides Israel’s legal system, it is more difficult to repeal than a regular law.For its detractors the law has downgraded non-Jews living in Israel to second-class citizenship, while its supporters say the law simply states the obvious – that Israel is the nation-state of the Jewish people, much like France is the nation-state of the French, and Spain of the Spanish, while still retaining Israel’s democratic values. On August 4 protesters, led by the Druze leadership, demonstrated in Tel Aviv’s Rabin Square demanding a repeal of the law.After the passage of the law, Khatib recounted in a phone conversation how hearing about the passage of the law late on the evening of July 19, when he came back from a wedding celebration, had left him in shock and disbelief. Still, even then, he did not lose what I have come to realize is his characteristic optimism about life in general and life in Israel in particular. 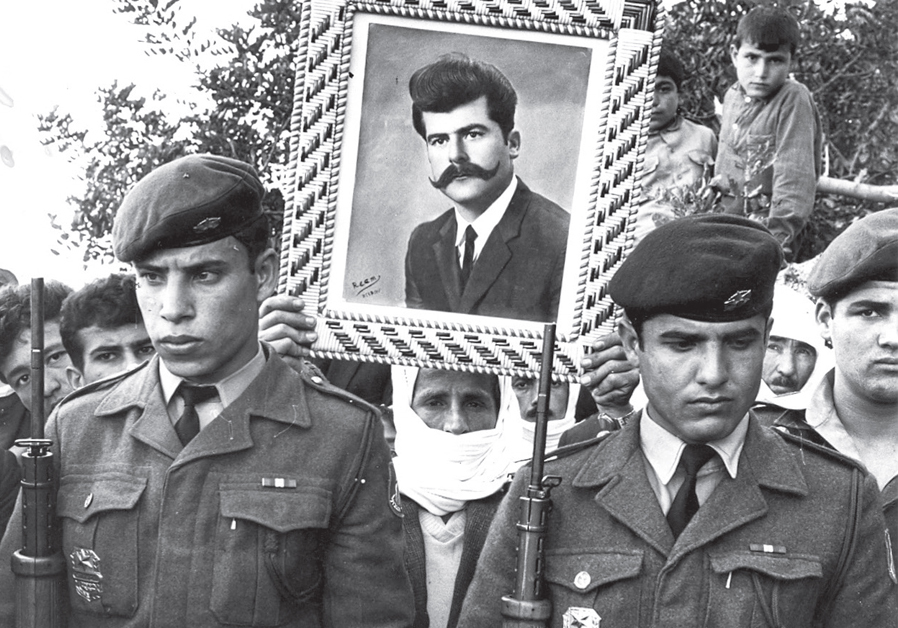 A DRUZE frontier force policeman (pictured in the photograph), killed in active service on the West Bank, is buried in his Western Galilee home village around 1980. (MICHA BAR-AM)BUT BEFORE all that, as we sat at the café chatting over our cappuccinos and snapping selfies at his insistence, I could not help but be infected by his natural enthusiasm for life and for the country. Even after a struggle with Waze during Jerusalem’s maddening rush hour, he arrived to our meeting with a burst of energy and a smile on his face.In his arms he carried a carefully wrapped blowup of his grandparents’ photograph made from the newspaper copy, and an original copy of the 30-year-old article. The article had been carefully preserved and saved in the family for 30 years, ever since a relative had read it and brought it to them.They do not have many photographs of their grandparents in their youth, Khatib explained, and he had found the preserved article recently. He was especially excited to see his grandfather, a well-known and respected village personality, who had died at the age of 49 before Khatib was born.It seemed like I was talking to an old friend, as our conversation meandered from how he met his wife – 37-year-old Lara Ganem Khatib, who has her own law practice and gave birth to their second child last month – and how they had made the decision to marry without any intermediary, contrary to traditional Druze custom, to how they are raising their 10-yearold son in Karmiel, where he studies with Jewish classmates and speaks Arabic at home, to how long it took Khatib, who served six months in the army before receiving a medical release, to get a proper job as an electrical engineer, first with the US Army Corps of Engineers in Israel, until he became known in the local construction market, and how they had to work out a way to finally be able to buy their home, which is built on land meant only for Jewish use.But even when discussing the more difficult issues, Khatib remained upbeat and positive, speaking proudly of being a part of a young generation of Druze who no longer fit into the stereotypical ideas of Druze and Druze in Israeli society.At the time he told me that he felt that in the past 30 years much had changed in Druze society, which, while still striving to maintain its traditional heritage, is also challenging itself to be included in mainstream Israeli life as the smallest religious minority in the country. Still, he said, for many young Druze it is frustrating to come home after their military service and see that their Muslim and Christian contemporaries in the village have already completed or are about to complete an academic degree, while they have to struggle to find housing and often can’t afford to start studying at an older age, as they are expected to start saving to build a home and prepare for their future marriage.Indeed, he said, lack of housing is a common problem within his community, and many young men of the community complete their military service only to discover that they have no place to build a home when they are starting out their lives.“I feel Israeli, but if you ask me if I have felt discrimination... with people who have met me face-to-face, I have not. But if they speak to me on the phone first and hear my name, I have had problems,” he said. “Discrimination still exists, but... if I start to [dwell] on it, it will pull me down.“Today, despite all the obstacles, people are moving forward with our lives,” Khatib added. “Everybody is making an effort to succeed and all possibilities are open.”All his siblings are also college educated, he said whereas a few decades ago the main career path for many young Druze was the military or police force. 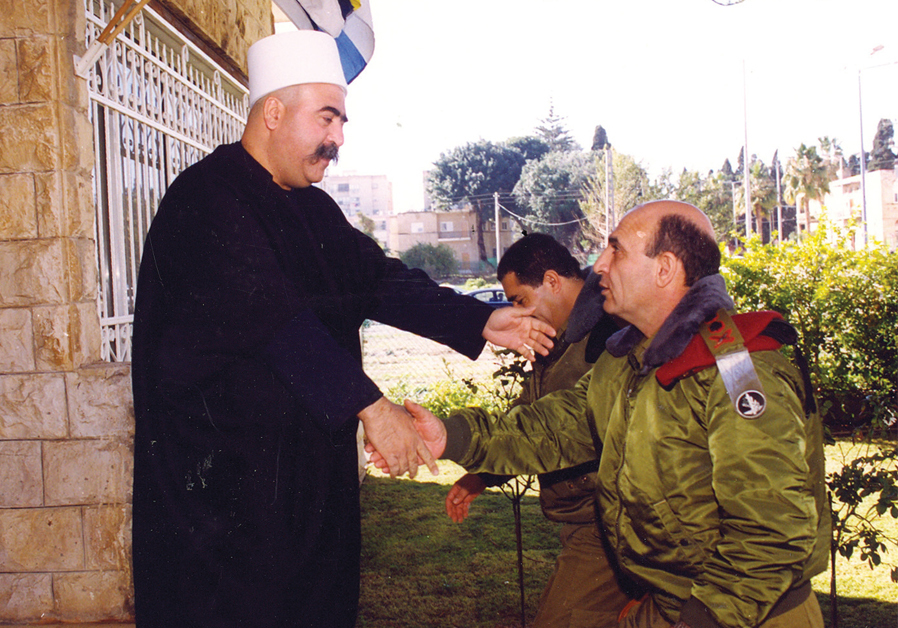 SHAUL MOFAZ, then IDF chief of general staff, meets with a Druze religious leader in the North in 2000. (ARIEL TEGER/IDF SPOKESMAN’S UNIT)He urged me to speak to Ganem Khatib to explore the changing role and place of women in Druze society. In a phone conversation she spoke emphatically about her own studies, her independence and the measured changes taking place for Druze women. Albeit slowly, she said, many more women from the community are putting off marriage for a few years and continuing to university studies, mostly in education for the meantime.“So we have many unemployed teachers,” quipped Ganem Khatib, whose third academic degree is in criminal law.Still, in recent years a few Druze women have graduated from medical school and some have been appointed high school principals, she said.“There wasn’t this advancement before, and I hope it will continue to grow. Educated parents are pushing for all their children to be educated. Slowly, Druze are integrated nicely into all segments of Israeli society – not just the army,” she said.I spoke to other Druze who had broken the model, including an artist, a professor and a women’s rights activist, but then, due to a personal tendency toward procrastination, a pileup of other pressing assignments and a trip abroad, Khatib’s story was put aside for several months.WHEN NEXT I spoke on the phone with Khatib, after the passage of the Nation-State Law, he had just come back from his morning run and the endorphins were coursing through his bloodstream. Despite the uncertainty he felt about the law, he said he was keeping an upbeat outlook.“I want to keep positive and hopeful. I know the people of this country are not the government,” he said.“I am thinking of the next generation, of my son’s generation... about whether we will be unable to build new neighborhoods for young Druze,” Khatib said. “Nothing will change for me, but I am very disappointed.“If you read [the law] in black and white, Israelis are only Jewish people. What about the other minorities? There is no mention of minority rights. We know Jews are owners of the land since 1948, but [then] nobody deleted the rights of the minorities living here. But now, by passing the new law emphasizing that the owners are Jews, you are putting the other people here as ‘visitors.’ How can I explain that to my son?” And while people were concerned about the status of the Druze because they serve in the Israeli army, Khatib said the concern should be about the status of all minorities in Israel, not just those that serve in the army.“There needs to be some real deep thinking,” he said. “What they are doing here is dividing the people into categories, with Jews being No. 1. We want to feel like equal Israeli citizens, for me and the future generations. We were here before Jews came from Europe and North Africa, and our grandfathers chose to stand with the Jews side by side.”