3 Israeli winners of Breaking Barriers, an initiative led by Itzhak Perlman, discuss their efforts to create a more inclusive society and show that a love of art & music is for everyone. 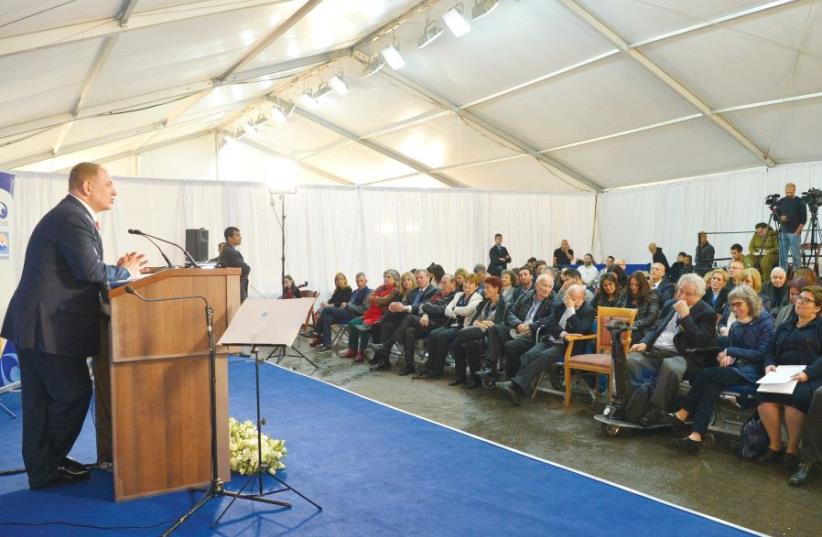 Netanyahu speaks at a ceremony in Jerusalem in honor of the winners of the Breaking Barriers competition
(photo credit: YOSSI ZELIGER)
Advertisement
When someone attends a concert, a certain behavior is expected – turn off your mobile phone, applaud at appropriate times, listen quietly as the music washes over you.However, families seeking to be part of the concert audience and who have a member with a disability often decide not to attend these events for fear they will not be able to adhere to this unspoken social contract.For this reason, Beit Issie Shapiro partnered with the Ra’anana Music Center to ensure that all families who have members with disabilities and who wish to attend a classical music concert can do so. The non-profit organization, which provides a comprehensive array of therapeutic treatments to people with disabilities, hopes to use the Breaking Barriers grant it received to fund its 10-part concert series, which will expose 1,800 of its clients to live performances of classical music.The organization’s executive director, Jean Judes, explained that families with a member who is disabled are often stuck when it comes to finding entertainment the whole family can enjoy. 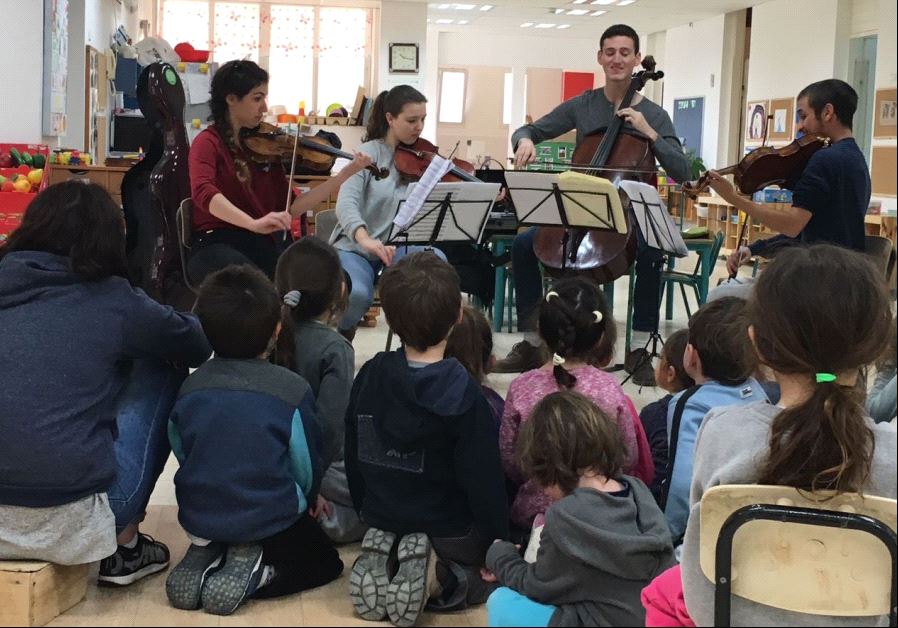 Musethica musicians play in front of a group of kindergarten children in Kibbutz Ramot Menashe in the North (credit: MUSETHICA)“One of the biggest problems is how to enjoy family quality of life where most of the leisure activities require one to either leave the child with disabilities at home or bring the child to an event that doesn’t interest the rest of the family,” Judes told The Jerusalem Post.Beit Issie Shapiro’s project was made possible because it is one of 17 Israeli winners of Breaking Barriers, a competition for organizations to develop programs that promote the inclusion of people with disabilities in all aspects of Jewish communal life.Breaking Barriers was funded by the prize money awarded to Genesis Prize Laureate Itzhak Perlman, who re-gifted his award to foster greater integration of people with disabilities into society. Perlman, who has used an electric scooter for decades after contracting polio at age four, is a staunch advocate of promoting the rights of people with disabilities. Breaking Barriers is facilitated by Matan-United Way in Israel and the Jewish Funders Network in North America. Results of the JFN North American competition will be announced later this year.“The uniqueness of Itzhak Perlman’s initiative is that the selected projects aim to raise the level of cultural content available to the disabled in Israel as high as possible,” Sana Britavsky, deputy CEO of the Genesis Prize Foundation, said during a ceremony at the Prime Minister’s Office earlier this month where the prizewinners were announced.“Encouraging excellence and repairing the world are integral parts of the vision of the Genesis Prize,” she added.“The truth is, we’ve always had a dream at Beit Issie Shapiro to invite Itzhak Perlman here and to do something with him because we always sort of saw him as an icon who really represents a person who has a disability, but that doesn’t define his life,” Judes said. “So we saw him as an inspirational model for people with disabilities.”For these special concerts, the performers and audience members will be told in advance that some people attending might react in nontraditional ways to the music.“The concerts are designed in a way so it would be fine should an outburst occur – they can react in any way they choose to,” she explained.Judes believes that the Beit Issie Shapiro/Ra’anana Music Center collaborative project is an effective one because music is the ultimate method of communication – especially for people whose physical or mental abilities may preclude them from using conventional methods of articulating their thoughts. 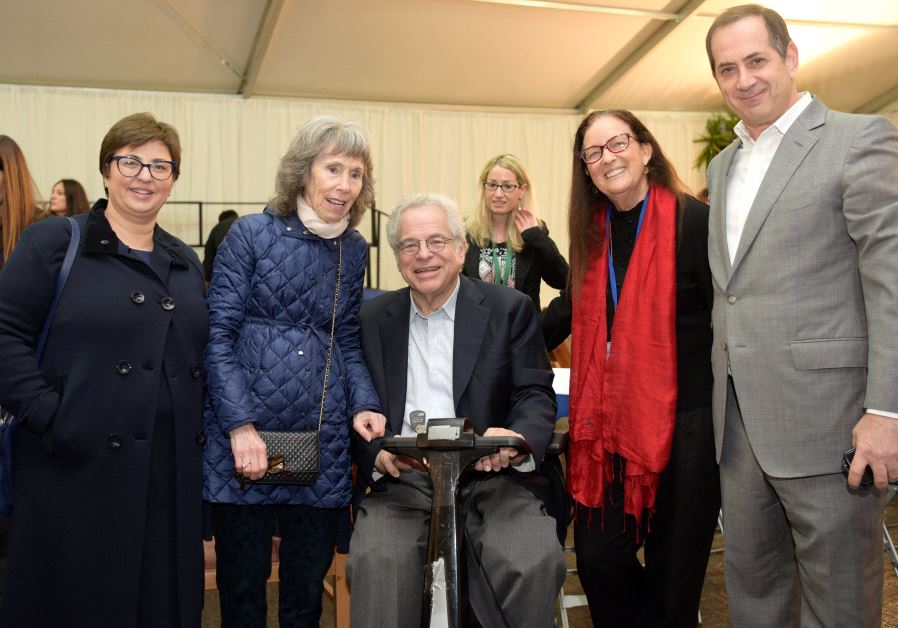 GPF Deputy CEO Sana Britvasky, Genesis Prize Laureate Itzhak Perlman and his wife Toby, Matan CEO Ahuva Yanai and Genesis Prize Foundation Chairman Stan Polovets gather at the ceremony (photo credit: YOSSI ZELIGER)“People with disabilities love music; it’s one of the most powerful forces for them. Very often they can’t speak about their feelings, and music helps them do that,” she added.Orit Naor, CEO of Musethica – another Breaking Barriers winner – would agree. While Beit Issie Shapiro provides various treatments for people with disabilities, Musethica focuses on the music. Year-round, the organization brings the best musicians from around the world to teach aspiring students here in Israel. Together, the musicians and the students travel the country to play for audiences, primarily from disadvantaged communities.When Naor stumbled across a call for applications for Breaking Barriers, she thought, “Wow, this is unbelievable. This is exactly us,” she recalled.Musethica provides concerts not only for people with disabilities, but also for prisoners, women who have suffered domestic abuse, Holocaust survivors and other groups often forgotten by society.“These people are not always visible, but we look for them and they are the best audience. They’re so thirsty for this culture and music,” Naor explained.Although the organization is only three years old, it has flourished; free admission makes it possible for individuals to attend any one of dozens of concerts in a variety of venues across the country.“This gift from Perlman is a blessing because we rely on private donations. Most of us are volunteers, but there are costs. The Breaking Barriers grant money was like oxygen,” she said in gratitude.Regardless of their unique approaches, one common denominator of all winning organizations is that they raise the bar for how Israel in general treats its disabled citizens.Matan-United Way decided to back Breaking Barriers because it believed that Perlman’s vision for inclusiveness matched its own and sought to combine it with Matan’s own experience and knowledge of investing in the community.“We wanted to be a part of Itzhak Perlman’s desire to use his influence to give back to society. This collaboration with the Genesis Prize and Itzhak Perlman allowed us to double our impact,” Matan-United Way CEO Ahuva Yanai said to the Post.Out of the 70 applications received, the selected winners were those that fit Perlman’s vision the best.“Maestro Perlman’s idea was very specific – he wanted to help people with disabilities across the spectrum and wanted to make sure all ages, geographic regions and economic statuses were represented,” she explained.Not only projects involving music benefited from Perlman’s Genesis Prize grant. The Israel Museum – a bastion of artistic expression in the Holy Land – was also deemed a worthy grant recipient. The grant money awarded to the museum will help fund its Art Education for Children and Adolescents with Special Needs program.The project provides outreach activities for youth with special needs to teach them the good art can do for the mind, body and soul.“We try to delve deep into the community, and when we reach out, we want to bring them to the museum, not only to attend, but to engage with the museum itself,” head of the Ruth Youth Wing for Art Education, Dr. Eli Bruderman explained.As such, the museum will offer special tours and weekly after-school activities designed to be interactive and encourage self-expression. It will also offer art projects specially tailored to each group’s needs.Bruderman believes Israel does an admirable job in adjusting society’s attitudes to people with disabilities, but like most social changes, there is room for improvement. For example, much work still needs to be done to increase accessibility for disabled people.For Ahuva Yanai, empowering people with disabilities is not a choice; it is an obligation Israel must take on as a just society.“As long as we do what we can to highlight what they’re capable of and give them a platform, society at large benefits. We can’t leave anybody behind,” Yanai said.