The Balfour declaration and Resolution 242

The documents provide a window into contrasting perspectives of the Arab-Israeli conflict and highlight the importance of the dual narrative.

Resolution 242 and the Palestinian narrative The Balfour Declaration referred to local Arabs as the “non-Jewish communities in Palestine” whereas, in Resolution 242, they were referred to as “the refugee problem.”For Palestinians, this was another example of their non-identification by outside parties. With no representation at the UN, they were not able to partake in any of the deliberations.In 1974, the PLO was granted “observer status” and in 2015 Palestine was recognized as a state by the UN. In calling for the “end of belligerency” Resolution 242 acknowledged the “sovereignty, territorial integrity and political independence of every state in the area.” Since Palestine was not recognized as a state at that point the Resolution bypassed Palestinian aspirations.In the 1960s, Palestinian identity was transitioning from a localized identity to a national identity. In the early stages of Palestinian opposition to Zionism, Palestinians saw themselves not as a separate nation but rather a part of Greater Syria. At the first Palestine Arab Congress held in Jerusalem in 1919, in addition to asking that the Balfour Declaration be rescinded, they called for Palestine to be included as “an integral part of... the independent Arab Government of Syria.”As decades passed, a Palestinian national identity surfaced and strengthened in opposition to Zionism.One of the bones of contention between Israel and the Arab world over the UN Resolution was the order of events when it came to establishing “a just and lasting peace.” The resolution lists withdrawal from territories first to be followed by “termination of all claims or states of belligerency” and the “right to live in peace with secure and recognized boundaries.” The Arab world insisted on this order while Israel said it would only follow the opposite order. When it came to the Israeli-Egyptian and Israeli-Jordanian peace treaties, modalities addressing both simultaneously were created. In 1988, the PLO accepted Resolution 242.Another area of disagreement came from the wording when it came to discussing withdrawal from territories captured by the Israelis in the Six Day War. The resolution reads, “Withdrawal of Israel armed forces from territories occupied in the recent conflict.” The American diplomat Eugene Rostow who penned the resolution specifically left the definite article, “the,” out of the sentence so it did not read withdrawal from “the territories,” leaving room for border adjustments. The Arab world objected to this, noting the French version had the definite article, les. While the definite article is used in the French version, it is there solely for grammatical reasons. At the UN, when there is a disagreement over texts, the text a resolution was drafted in becomes the version that is binding – in this case the English version without the definite pronoun. 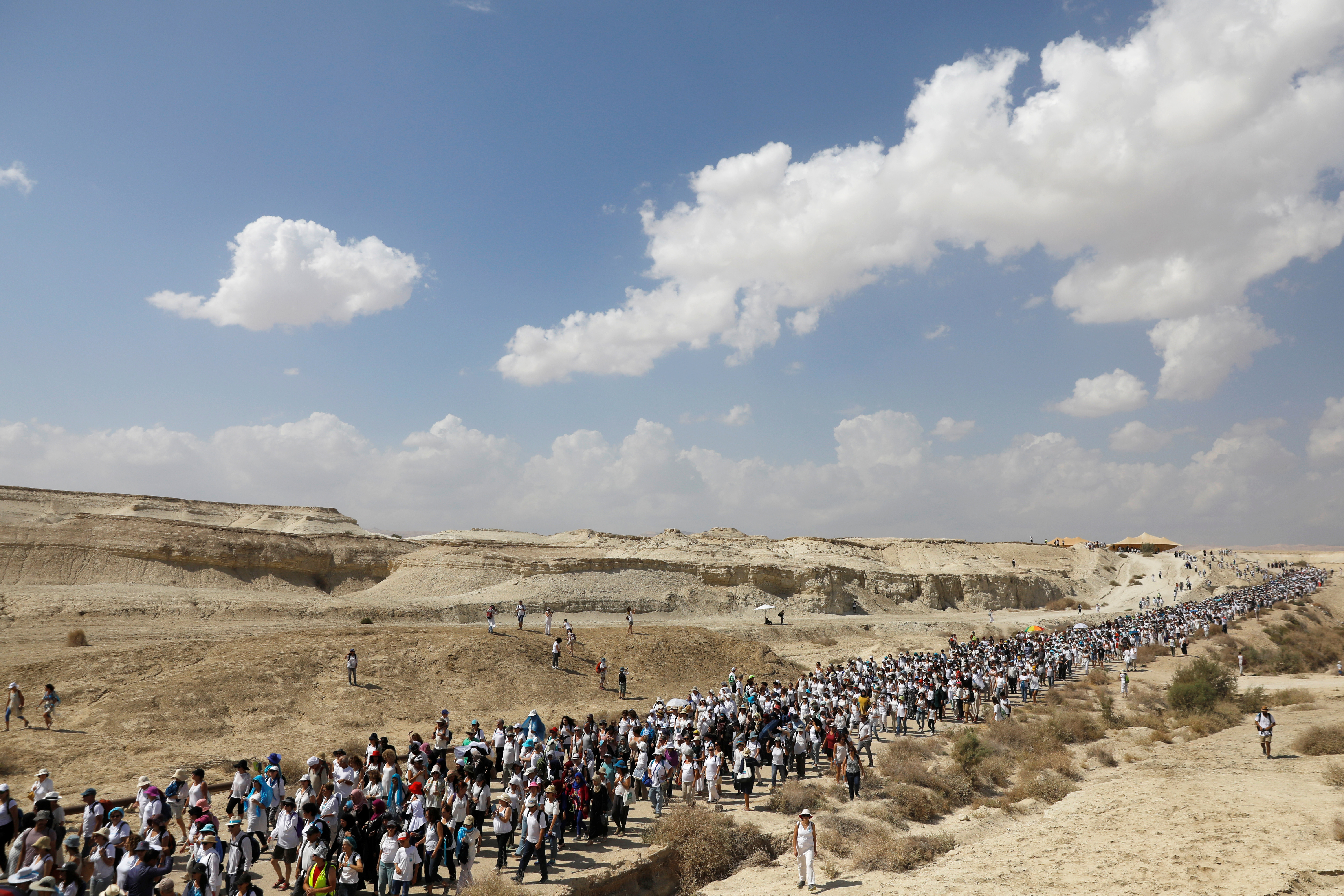 Palestinian and Israeli women march, as part of an event organised by "Women Wage Peace" group calling for an end to the Israeli-Palestinian conflict, near the Jordan River, in the West Bank October 8, 2017.

Resolution 242 and the Israeli narrative In contrast to the “Three No’s” of Khartoum, the Israelis were pleased that the resolution implied the neighboring Arab states needed to engage with Israel in negotiations and eventual peace and recognition. The Israelis also read the line, “a just settlement of the refugee problem,” as referring not only to the Palestinian refugees but also to the Jewish refugees from Arab lands.The Israelis agreed with the English version of the resolution that allowed for flexibility in creating permanent borders, as well as the need for withdrawal from territories and the end of belligerency to happen at the same time.Conclusions Israelis need to understand how their endeavor can legitimately be seen by Palestinians as an invasion, while Palestinians need to understand Zionism is based on an authentic connection the Jewish people have to the land.In “A Future for Israeli-Palestinian Peace Building,” his study of Israeli-Palestinian NGOs, such as the Arava Institute, Ned Lazarus highlights the positive impact of projects that include the sharing of narratives have on participants. Referencing a USAID Office of Conflict Management and Mitigation report, Lazarus found that 80% of participants reported greater willingness to work for peace; 77% reported increased belief in the possibility of reconciliation; 71% improved trust and empathy for the other in such dialogue groups. This underscores the invaluable role the dual narrative can play in this conflict.An acknowledgment by Israelis of the Palestinian narrative will not lessen the validity of their cause, and a recognition by Palestinians of the Israeli narrative will not take away from their national aspirations. Rather, mutual acknowledgments can open doors to new perceptions and opportunities. By acknowledging the profoundly different narratives, the parties can discover a different way to go forward.The phrase, “I hear you,” means more than an audio encounter has taken place. It means, “I recognize and understand who you are.”The belief of Israelis and Palestinians that the other really doesn’t understand who they are causes a chasm of distrust. Trust can be built with someone you feel grasps who you are; if you trust someone you can still disagree with them and find ways to advance. The 100+ organizations of the Alliance for Middle East Peace model this.The dual-narrative approach is not binary. It implies two sides, but that does not mean they are monolithic. Not all Palestinians think one way, nor do all Israelis, Zionists, Jordanians, Muslims, Jews, etc. Within each group there is a spectrum of viewpoints. While the dual narrative is a tool toward greater understanding, the nuance of a range of perspectives should never be lost.For decades, peace initiatives have focused on the core issues of the conflict: borders, security, refugees and Jerusalem. While core, not much is left to negotiate with regard to those issues. In many ways, what is preventing an agreement from being reached are the issues under the table, including fear, mistrust, cultural differences and acknowledgment of the other.The dual-narrative approach can create an innovative dynamic between Israelis and Palestinians that can address those critical interpersonal issues. Until they are addressed and scaled up with more participants, both in formal negotiations and in encounters between Israelis and Palestinians, any agreement will be much harder to reach.Perhaps Imam Al-Shafi’i, a Muslim jurist from the Islamic Golden Age, said it best: “Never do I argue with a man with a desire to hear him say what is wrong, or to expose him and win victory over him. Whenever I face an opponent in debate, I silently pray – O Lord, help him so that truth may flow from his heart and on his tongue, and so that if truth is on my side, he may follow me; and if truth be on his side, I may follow him.”The writer teaches Conflict Resolution at the Center for the Advancement of Public Action of Bennington College.