The Dead Sea: a different kind of heritage

The salt sea has some 12 million years of geological and chemical history. Will efforts to stabilize its water level kill its very essence? 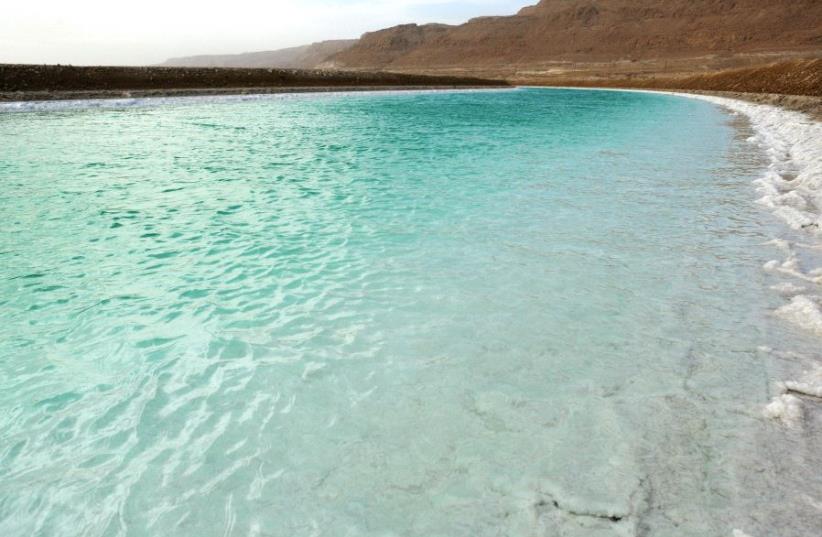 A water canal near the Dead Sea
(photo credit: MARK NEYMAN / GPO)
Advertisement
What is so special about the Dead Sea? Its peaceful waters are surrounded by the breathtaking Judean Desert at the lowest place on Earth, but what is it that attracts people from all over the world, and are we in danger of losing it? The Dead Sea is not just another salty lake. Its story began some 12 million years ago, when waters from the Mediterranean Sea filled the region and formed the Sdom Lagoon. The lagoon eventually disconnected from the Mediterranean Sea and the area was home to a sequence of water bodies that drained local streams and rivers.The Dead Sea as we know it today was formed roughly 14,000 years ago, when the level of Lake Lisan, the last of this sequence of lakes, dropped roughly 160 meters due to natural climate change.

While the original lagoon water might have been similar to that of the Mediterranean, today’s Dead Sea is very different. Not only is its water almost nine times saltier and much more buoyant, its chemistry is different.Processes such as evaporation, mixing with fresh surface water, formation of salt minerals and chemical interactions with the surrounding rocks have left their chemical imprint on the water. To geologists, the chemistry of the water is like an archive to historians, as it holds the record of its past. Is this archive at risk? Growing population together with declining rainfall have led to an acute water crisis in our region. The scarcity of freshwater and growing demand for it, both in Israel and in its neighboring countries, has resulted in the diversion and exploitation of every drop of available water, including water that once fed into and replenished the Dead Sea.The Deganya Dam at the southern outlet of the Kinneret (the Sea of Galilee) has limited its flow into the Jordan River, which is now diverted for human use. To make matters worse, mining companies in both Israel and Jordan evaporate Dead Sea water to mine its salts.This has resulted in a water deficit of some 700 million cubic meters a year to the Dead Sea, or roughly a meter a year in the water level.One of the biggest and most talked-about concerns regarding the receding water is the development of thousands of sinkholes along the Dead Sea coastline.These sinkholes are responsible for infrastructure damage, abandonment of plantations, campground closures, massive engineering projects required to keep the roads safe and open, and an overall daily challenge to the local communities.In its long geological history, the Dead Sea has seen times of declining water levels, sometimes nearing desiccation.There is even geological evidence for ancient sinkholes. A major difference between those events and the present, however, is the cause.While in the past these were all part of natural processes, it is difficult to ignore the role that we play in the current situation and its consequential economic and environmental results. The anthropogenic influence on the region is so intense that realistically it is not possible to merely “let go” and expect the Dead Sea to restore itself naturally.Different plans to bring water to the region have been suggested. The plan most promoted is the Red Sea-Dead Sea conduit, under the support of the World Bank. Dr. Doron Merkel of the Israel Water Authority explains in a recent article in the Israeli journal Ecology & Environment that the elevation difference between the two seas will create “clean energy” for the desalination of Red Sea water that would also provide some of the needed freshwater to Jordan.The byproduct brines would be directed to the Dead Sea to assist in slowing the decline in the water level. In addition, Merkel points to the political benefits of a joint regional project by Israel, Jordan and the Palestinian Authority.An alternative plan by EcoPeace Middle East suggests utilizing recent technological advances in desalination.They suggest increasing the desalination along the Mediterranean coast and reversing the National Water Carrier to store water in Lake Kinneret. This, they say, would provide needed freshwater to the region, as well as allow the restoration of the southern Jordan River and the Dead Sea.Both these ideas have strong advocates and strong opposition regarding their financial and ecological costs. There are also unknown risks to the Arava Valley, its underlying ground waters and to the waters of the Dead Sea. Opponents to the EcoPeace plan also raise the issue of having to triple the energy cost of desalination in order to provide the required amount of water to the Dead Sea, and the ecological damage to the Mediterranean coast from enhanced desalination.While solving the water crisis and saving the Dead Sea are at the core of the different plans, the fundamental question remains: What does it actually mean to save the Dead Sea? Is saving the Dead Sea merely a question of water balance? Its water is rich in calcium, while the Red Sea has sulfate, which is a major concern regarding the mixing of desalination byproduct brine from the Red Sea into the Dead Sea. This could result in the precipitation of gypsum (calcium sulfate), which would alter the chemical composition of the water and might also result in whitening of the water surface by the mineral particles.While Merkel says this would be of concern only with an intake of above 400 million cubic meters of brine a year, it points to the fact that the Dead Sea, with its long geological history, has a unique chemistry.While Israelis talk a lot about our religious, historical and cultural heritage, what about our geo-heritage? Geo-heritage is a fairly new research field in geoscience, says Dr. Yaron Finzi of the Arava and Dead Sea Science Center. He asks whether we as a society could consider the very essence of our physical environment part of our heritage.There is no question regarding the uniqueness of the Dead Sea, but can we recognize the value of the story its water tells us of our region? Saving the Dead Sea should perhaps also mean protecting its unique historical archive.Given the dire water situation in the Middle East, it is difficult to imagine “wasting” natural or “good” waters to save a lake, but perhaps with the advancement of desalination and water recycling technology, a broader water management plan and vision, we could also set those waters free and give the Dead Sea the lifesaving infusion it needs.The writer, a PhD in Earth sciences, is a researcher at the Institute of Earth Sciences at the Hebrew University of Jerusalem.This article was written under the auspices of Zavit – Science and Environment News Agency.