The legacy of Dan Shomron: The ‘forgotten’ commander of Operation Entebbe 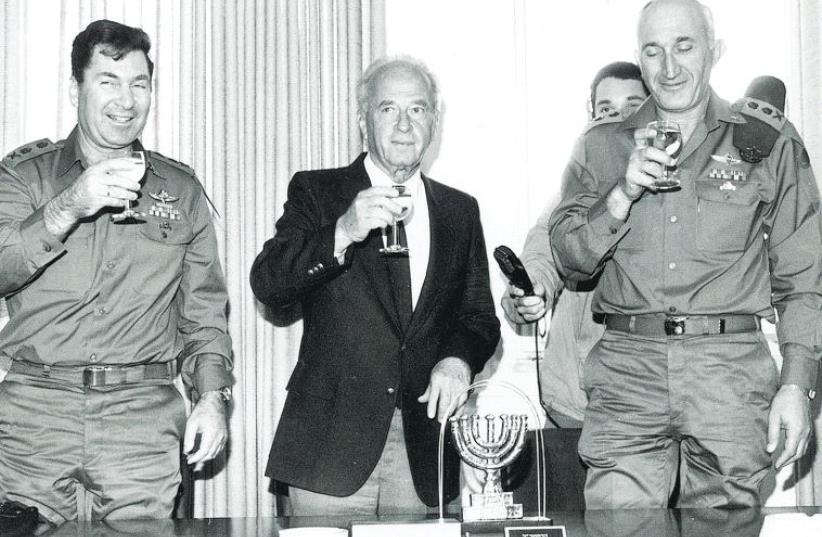 Dan Shomron (left) with Yitzhak Rabin and Moshe Levy
(photo credit: AVI SIMHONI/BAMAHANEH)
Advertisement
When the Kinneret College on the Sea of Galilee asked Col. (res.) Prof. Ze’ev Drory to serve as its executive director, he set two conditions before accepting the offer. He wanted to continue teaching, and he wanted to establish a research institute named after the late IDF chief of staff Dan Shomron.Drory’s book Quiet Leadership, about Israel’s 13th chief of staff, is scheduled to be published soon in Hebrew.

“Dan Shomron’s name is not mentioned often, because he was very modest,” Drory explains excitedly. “He was a preeminent Paratroop [Brigade] officer, and if not for him Operation Entebbe would never have gotten under way, according to Yitzhak Rabin and Shimon Peres. During the Yom Kippur War, Shomron commanded Division 401, whose actions during the war were necessary for us to win the war. During an event in which many of us gathered to talk about Danny, we played a recording of him saying to Emanuel Sakal, one of the regiment commanders, ‘The people of Israel need you – don’t hurry to the outposts. Turn around and take up positions. We need every tank we have.’ He spoke in a softer tone than I’m speaking with you right now.”
You met him during the war?“After I breached the Egyptian tanks, I went up to the war room at military headquarters so I could give my report to the OC Southern Command. When I reached the door, I saw Dan shaving inside the room. I was shocked and said to him, ‘Danny, we’re in the midst of a war.’ I was so dirty after an insane night full of fighting, and he just looked at me and replied, ‘Ze’evik, the soldiers need to see us looking strong.’ That was Dan Shomron.”
Was he hidden by his modesty? “He would say that history will judge. What he didn’t know was that there is no such thing as history, just historians, who all write from their own perspectives. In the Yom Kippur War, his brigade captured Adabiya and reached ‘Kilometer 101’ with the smallest number of casualties. Unfortunately, we tend to remember those who lost the most soldiers.”
And yet he was appointed IDF chief of staff.

“Yes. Claims were made by individuals, including [12th IDF chief of staff] Moshe ‘and a half’ [Levy], that because Dan was allegedly homosexual, he could not be appointed chief of staff.They started a smear campaign against Dan when he was appointed OC Southern Command, but Raful [Rafael Eitan] couldn’t do anything about it, since he began his term as chief of staff on the very same day.“Levy was so intent on preventing Dan’s appointment that he asked for a meeting with prime minister Yitzhak Shamir. Shamir asked him, ‘Do you have any proof?’ and Levy replied, ‘I’ve heard rumors.’ Shamir told him to leave the room and didn’t agree to speak of the issue ever again.“Dan refused the nomination. He said, ‘I want the Shin Bet [Israel Security Agency] to find out who is responsible for starting this rumor.’ An investigation was carried out. Dan was the first person to undergo a polygraph test, which he passed, confirming that he was not homosexual. I was supposed to meet with the Shin Bet investigator, but he died a month before our meeting.” 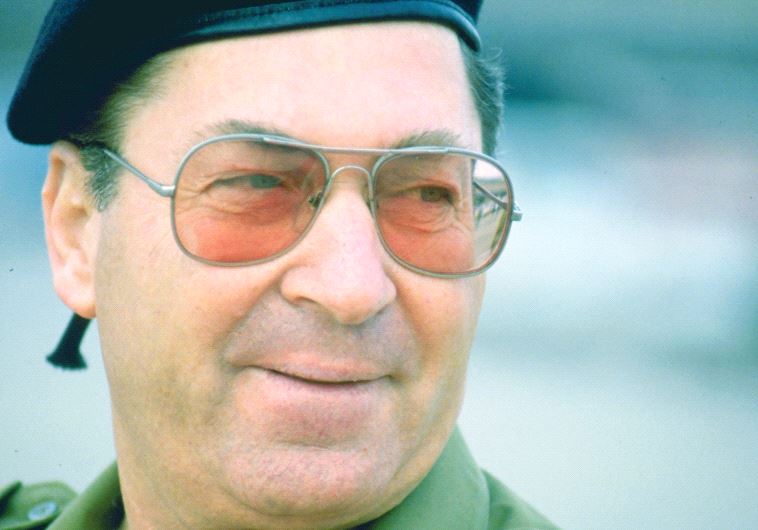 Dan Shomron, as chief of staff, 1987 (photo credit: SA’AR YA’ACOV/GPO)Did you know about this story at the time? “As one of the senior officers, I was privy to this information, and it shocked me deeply. I couldn’t believe how low people were willing to go in the battle over the chief of staff appointment. They crossed all ethical lines – I did not expect such low behavior from high-ranking officials.”
Nobody really remembers Shomron’s involvement in Operation Entebbe either.

“Dan Shomron was the person who presented the Entebbe rescue plan to the prime minister, defense minister and chief of staff. He was commander of the Paratroop Brigade at the time. Even in the midst of an operation, he spoke with a quiet voice, and was always in complete control.“When Peres, who was defense minister at the time, asked him, ‘What are our chances of success?’ he replied: ‘The most important thing is the element of surprise. If the first plane succeeds in landing without being identified as Israeli, and we don’t get delayed, I estimate that the entire operation will take 60 minutes.’ Then Peres asked, ‘And how many casualties?’ Dan replied, ‘If the element of surprise works, we might get away with only five or six casualties.’ And that’s exactly what happened.“I spoke with Dan about Entebbe a number of times, and he admitted that what he was most worried about as the Israeli planes made the long flight to Africa was, what if it didn’t go as planned? Amos Eran, who was director-general of the Prime Minister’s Office at the time, recalls that Rabin asked him to have resignation letters ready for himself and his government, in case there were more than 25 casualties. People don’t understand that the operation was much more complicated than it looked, and involved a very large number of Israeli soldiers.”
What distinguished Shomron from his predecessors?

“My ex-wife, Batya, is still to this day a member of Kibbutz Hatzerim, and we’ve remained friends. In fact, we just spoke five minutes ago. Despite the fact that we’re divorced, we have four children and six grandchildren together. We still hold a Seder together. When my friends held a birthday party for me on Shabbat, she was there, too.”Drory knew he was taking a risk choosing to live alongside Dorit, since she had family members who’d suffered from a genetic fatal neurodegenerative disease called GSS. It was rare, but extremely vicious. “Once the brain is affected, you aren’t the same person,” he says. “This is how her mother and a number of her other relatives had died.You never know when the disease might rear its ugly head, turn you into a vegetable and then kill you. Dorit even once told Batya, ‘Don’t let go of him, I’m going to die young.’ She knew that there was a high probability this would happen.But I wanted to be with her, despite the risk, and we had 12 wonderful years together in Moshav Shilat.”
How did you feel after she died? “This was the second traumatic experience that I’ve encountered in my life.But during the greatest disasters, our animal survival instincts take over.”We’re talking next to a beautiful archeological park that was established in Dorit’s memory at Kinneret College.Drory says that creating it helped him tremendously to put his life back together.During his tenure as executive director from 2007 to 2015, Kinneret College tripled its number of students and became an independent institution (it had previously been a branch of Bar-Ilan University).“When I first took this position, I said, ‘Let’s make a list of our core principles.Let’s put down in writing what our vision and goals for the college are,’” Drory recalls. “Every year, we would check where we stood. One of the college’s goals was to serve students in the periphery, namely Beit She’an, Tiberias and the southern Golan Heights. There are so many young people in this area who never had the chance to study.I was so incredibly happy the day we awarded certificates of excellence to two students from Beit She’an.” 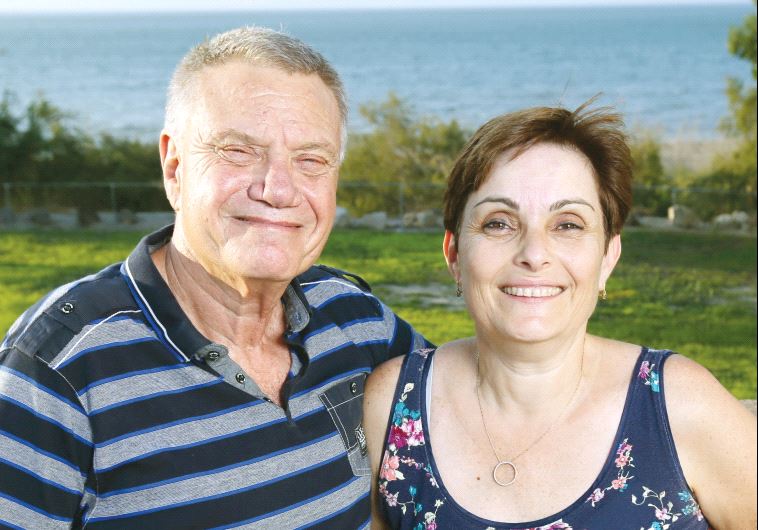 Prof. Ze'ev Drory with wife Yael (photo credit: ARIEL BESOR)The periphery is a hot topic in the media these days.

“Unfortunately, some politicians use this topic as a way to make disparaging comments against other politicians. I mean, who ends up getting airtime on TV? The ones who say negative things and yell the loudest.”
AFTER SPENDING three hours talking, Drory apologizes and says he has to go. Yael, his third wife, was waiting for him so they could finish packing up the contents of their home. After living for years overlooking the Kinneret, they were returning to live in Jerusalem.Yael is the widow of Achi Racov, the internationally known computer expert who died in 2002. Drory met her here seven years ago, on the beach of the Kinneret.Yael was busy commemorating her late husband through philanthropic activity and the Achi Ezer Fund, which she founded in his memory. They met one day when Yael was at the college in connection with the engineering school that was named after her late husband. During the time they worked together on this project, their relationship deepened, and they married in the ancient synagogue in Ein Gedi.“When we got married, we told our guests that instead of bringing presents, they should make donations to the Dan Shomron Foundation at the college or to the city of Ofakim,” Drory says.
If the country is so important to you, why don’t you become involved in politics?In reply, Drory told me a story. “In 1984, I was recalled from Lebanon to give a lecture at the graduation ceremony of the Israel National Defense College,” Drory says. “I was the Givati Brigade commander, and I told the crowd that I hoped that in the upcoming election no one candidate would receive a majority, so that a coalition government would have to be formed. This way, there’d be a chance we’d be evacuated from Lebanon and inflation levels would be lowered. Raful was in the audience and he didn’t look too happy to hear what I was saying. He stood up and said, ‘You’re talking politics!’ In response, two of my advisers jumped up and said, ‘But he’s absolutely right!’ and everyone applauded.“And what happened in the election? Shamir and Peres formed a coalition government, we were evacuated to the security zone and inflation rates went down.That’s what happens when there’s a coalition government. Raful called me up afterward and told me, ‘You’re done for.’”
But why don’t you consider entering politics now?

“I don’t have the right personality for it. I like to say what I really think.When I finished my military service, [Binyamin] ‘Fuad’ Ben-Eliezer called me up and said, ‘Ze’evik, we’re creating a new political party, and we want you to fill our No. 3 slot as a representative of kibbutzim and moshavim.’ So I went over to his house and sat down with Ezer Weizman, from the Yahad Party.For half an hour, I sat and explained to them why I wasn’t cut out for this type of work. Afterward, Dolly, Fuad’s wife, came into the room and banged her fist on the table and said, ‘Fuad, how can you not understand that he’s not for politics? Even I got it already!’”
Translated by Hannah Hochner.