The Nuremberg Diary: A front row seat to evil

70 years after the trials of major Nazi war criminals, a German-to-English translator recounts harrowing interviews with some of history's most evil men. 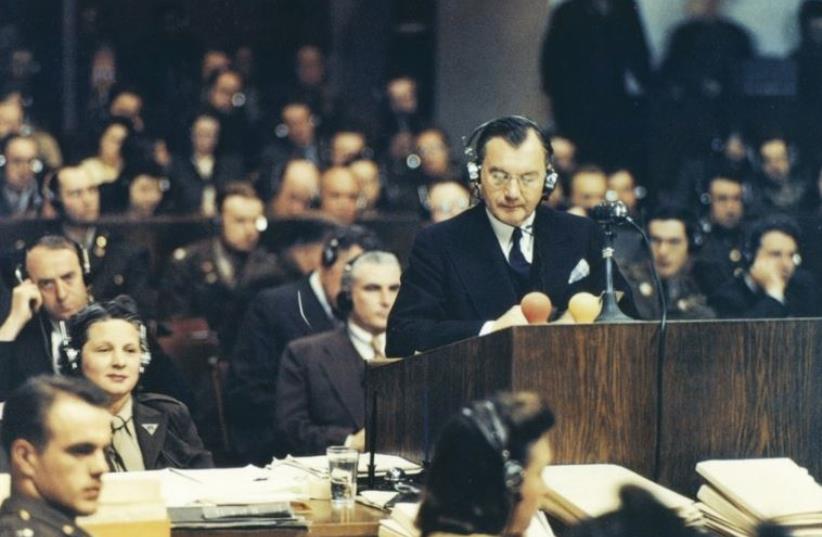 Chief American prosecutor Robert H. Jackson addresses the Nuremberg court on November 20, 1945
(photo credit: Wikimedia Commons)
Advertisement
One day not long ago, I opened a desk drawer in my home office and carefully removed a small, spiral-bound diary that I wrote in Nuremberg, Germany, fully seven decades ago. When I started it in 1945, I inscribed on the cardboard cover, in fountain pen ink, a one-word title: “SECRET.” Inside, I wrote candidly of experiences I was having while participating, as a staff member of the Office of the US Chief of Counsel for the Prosecution of Axis Criminality, in the trial of the most incriminated former leaders of the defeated Nazi regime.Seventy years ago this week, just a few days before Thanksgiving 1945, in a packed courtroom in Nuremberg, the first session of the true “Trial of the Century” was opened. During the ensuing 10 months, 23 former Third Reich officials stood trial in that war-ravaged city’s imposing Palace of Justice before a panel of judges from the US, England, the Soviet Union and France. Ultimately, all but three of the defendants were convicted of, variously, war crimes, crimes against humanity, and crimes against peace (that is, waging “aggressive war”). Ten of the men were executed, and Hermann Goering committed suicide shortly before he was to be hanged.Tried in front of the specially created “International Military Tribunal,” this was the landmark trial – and this was the court – in which international criminal law was born. “Nuremberg,” to use the now-common shorthand, was thus the progenitor of the International Criminal Court and other tribunals that were created after the Cold War ended to try the perpetrators of genocide and other atrocity crimes perpetrated in such places as Rwanda and Bosnia. The Nuremberg trial’s revelations about the scope and depravity of Nazi crimes – and world leaders’ continuing failure in this new century to prevent, or sometimes even to halt, the perpetration of large-scale atrocity crimes – weigh heavily on the conscience of humankind to this day.A vast body of literature exists about the trial, and also about the 12 follow-up trials that US occupation authorities conducted in Nuremberg against lower-level perpetrators of such grotesque crimes as lethal human experimentation. The record of what transpired in Courtroom 600 at the first trial is widely available. Indeed, most of the trial was filmed and can now be viewed online, with the audio of the English-language simultaneous interpretation intact. (Simultaneous interpretation made its world debut there as well.) However, many of the most dramatic and important developments occurred outside the courtroom, especially during the interrogations of the perpetrators.Those confrontations remain little known, in part because journalists were not present and no audio or film recordings were made. Having served as the sole German-English interpreter during many such questionings (as well as an interpretation “monitor” inside the courtroom), I am one of the last surviving participants and therefore one of the last eyewitnesses. I had a front-row seat, so to speak, as such monstrous evildoers as Goering, the perverted anti- Semitic propagandist Julius Streicher, former Auschwitz-Birkenau death camp commandant Rudolf Hoess, and Otto Ohlendorf, a senior commander of one of the notorious Einsatzgruppen mobile killing units, were confronted during their interrogations with incriminating evidence, often in the form of captured wartime documents that they themselves had signed. Most of the men eventually admitted to us the basic facts of their involvement in the Nazi machinery of annihilation and despoliation.Very disturbingly, however, many also tried to justify their actions, particularly on the basis that they were “obligated” to follow orders, even criminal ones.In the diary I wrote at Nuremberg, and in a letter to my aunt in New York, I recorded some of the more horrifying and significant statements of the men we questioned, along with my personal reactions and observations. Sometimes I quoted the prisoners verbatim in the original German.From time to time, I return to my Nuremberg notebook. Whenever I do so, memories that have scarcely faded despite the passage of seven decades are vividly, often painfully, revived.I HAD seen much horror prior to arriving at Nuremberg, during combat from the time I landed with the 104th Infantry Division at Normandy (a week after the bloody initial June 6, 1944 invasion) until fighting ended in Europe in May 1945, and especially when my unit liberated the nightmarish Nordhausen concentration camp on April 12, 1945. Yet the contents of my Nuremberg diary still shock and even haunt me. The stenographic transcripts of the interrogations have survived, to be sure, and confessions that we obtained can be heard being quoted when they were offered in evidence at the trial. But the typed transcripts cannot possibly convey the full, terrible reality of what it was like to participate in these proceedings. Despite the fact that I now have more than 50 years’ post-Nuremberg experience as a clinical psychologist behind me, I continue to wrestle with what the perpetrators did, what they said to us under questioning, and how they said it. 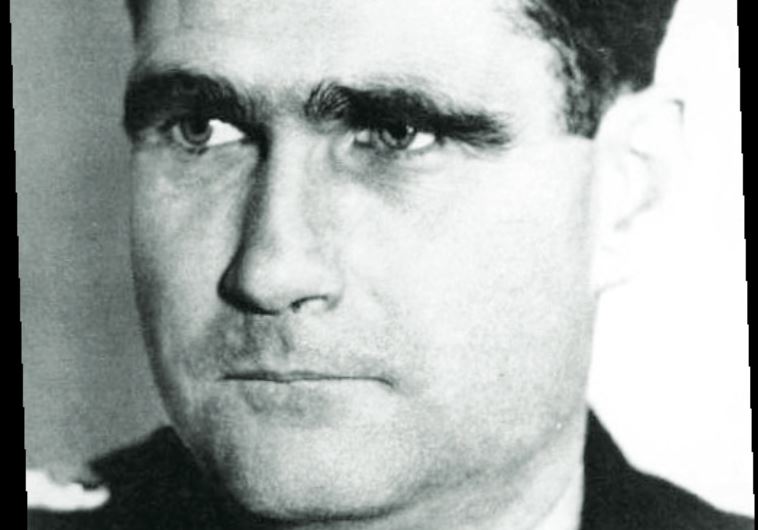 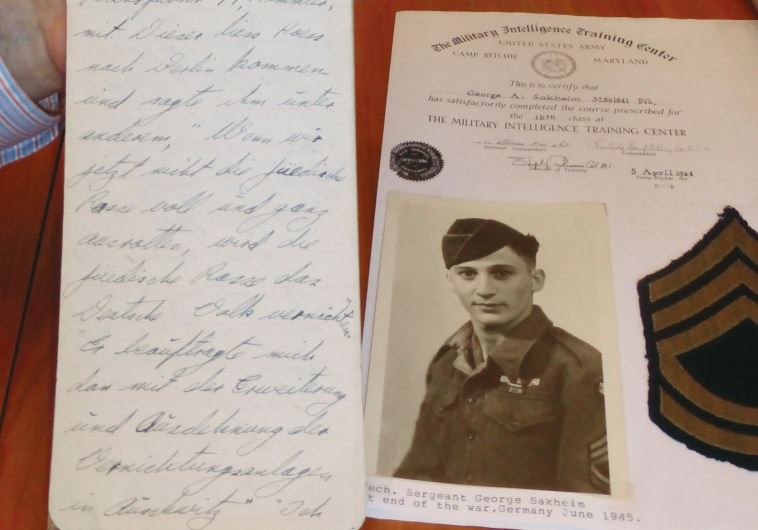 NOTES BY George Sakheim in his Nuremberg diary. The page is open to notes from the interrogation of Rudolf Hoess. The author’s army picture is at the right. (Courtesy George Sakheim)We turned the German people into friends and allies. Germany has become a reliable democracy that vigorously protects civil and human rights.As I wrote to my aunt during the trial, some of my experiences at Nuremberg left me with “a feeling of supreme futility.” “What’s the use of it all?” I wrote her in reference to the Holocaust in particular. “Nothing we can do will bring those six million people back to life.”But there was, after the trial ended, reason for optimism. First of all, justice had been done; after 435 court sessions in which 33 witnesses for the prosecution and 61 witnesses for the defense testified and in which thousands of documents were reviewed and entered into the record, 20 of the 23 men on trial were convicted. Defendants were found complicit in, among other outrages, carrying out the Nazi seizure of power, subjugating Germany and German- occupied countries to police state rule, preparing for and waging wars of aggression, conducting warfare in total disregard of international humanitarian law, enslaving and plundering populations in occupied lands, and persecuting and exterminating Jews. The fact that judges from different countries and legal systems found unanimously that such acts amounted to crimes against peace, war crimes, and crimes against humanity constituted a truly monumental achievement in the development of international law.I well recall the satisfaction I felt, particularly as a Jewish boy who had fled Nazi Germany, that I was able to take part in my adopted homeland’s historic pursuit of justice in post-Nazi Germany. We “Nurembergers,” as we eventually came to call ourselves, were further encouraged by the adoption of the Convention Against Genocide just two years after the trial ended. (It was at Nuremberg that the word “genocide,” coined by Professor Rafael Lemkin in 1944, was spoken for the first time in a court of law.) As an American, however, it was deeply frustrating and yes, embarrassing, to watch as the United States resisted ratifying the Genocide Convention for literally 40 years, until 1988, when we became the last major Western country to do so. Those unhappy feelings are rekindled when I contemplate the fact that Congress’s repeated failure to enact a crimes against humanity law – a crime that the United States and its wartime allies famously and successfully prosecuted at Nuremberg so long ago – has again made the US an outlier in the community of democratic nations.I BELIEVE that most of us who participated in the grand experiment at Nuremberg in bringing national leaders to the bar of justice for war crimes, crimes against humanity, and crimes against peace assumed that no one would ever again dare to perpetrate such crimes, at least on a large-scale basis. After all, as prosecutor Jackson predicted in his justly celebrated opening address on November 21, 1945, the crimes that were prosecuted at Nuremberg were “so calculated, so malignant, and so devastating that civilization cannot tolerate their being ignored, because it cannot survive their being repeated.”But repeated they have been. Even genocide, the so-called “crime of crimes,” has been repeated. Plainly, we overestimated the deterrent effect that the trial would have. Just as tragically, we greatly underestimated man’s continued propensity for evil. We simply could not have imagined that governments would perpetrate such crimes again or that groups would arise, such as ISIS and Boko Haram, that would not only commit atrocity crimes on a systematic basis but would openly boast of doing so, brazenly disseminating the proof of their atrocities to a vast worldwide audience. 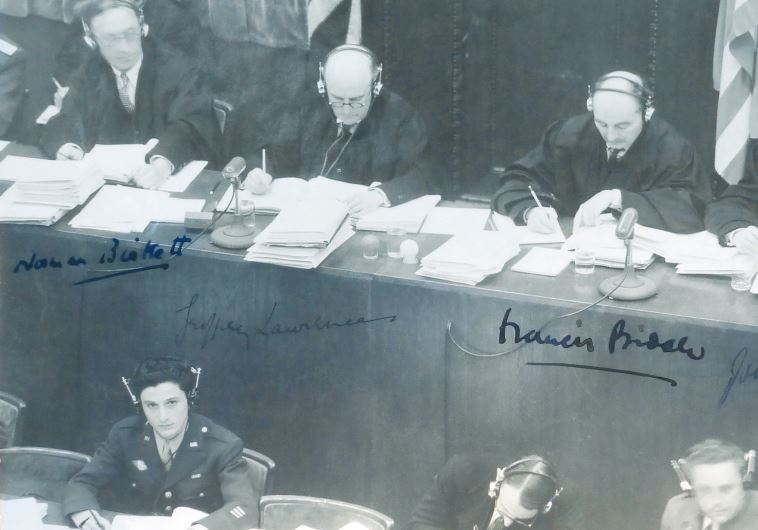 GEORGE SAKHEIM, at left, in front of judges at Nuremberg Trial, 1946. The photo was signed by British and American judges. (Courtesy George Sakheim)

Fully 70 years have passed since the Allied Powers made good on their 1943 public warning to the perpetrators of “atrocities, massacres and cold-blooded mass executions” that “most assuredly the three Allied Powers will pursue them to the uttermost ends of the earth and will deliver them to their accusers in order that justice may be done.” Soon, there will be no remaining “Nurembergers” to teach the lessons that they learned firsthand at Nuremberg. There will be no one left who can read aloud from a diary in which he or she recorded that which must never be forgotten. But those lessons – especially that the propagation of hatred can produce murderous results and that no nation’s leaders can expect immunity when they criminally violate the bedrock precepts of civilization and humanity – must not, despite the passage of seven decades, be consigned solely to the history books.In a world still plagued by the commission of mass atrocity crimes, they are, still, of literally life-and-death relevance to imperiled peoples across the globe. The author was an interpreter at the International Military Tribunal in Nuremberg from October 1945 through April 1946. In a 2009, he was one of nine US World War II veterans awarded France’s highest decoration, as a Chevalier of the Order of the French Legion of Honor. A retired clinical psychologist, he and his wife reside in Gwynedd, Pennsylvania.