‘The job satisfies my fantasy of being an eternal student' 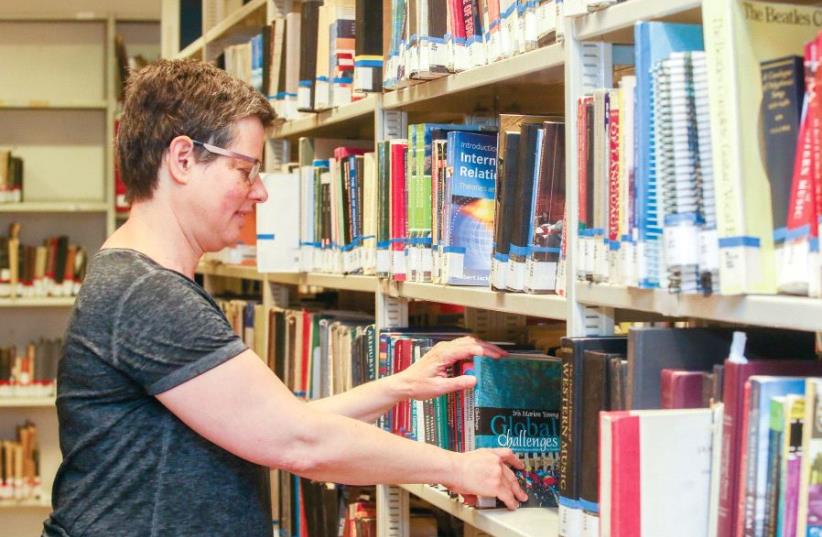 Galila Sfarim
(photo credit: MARC ISRAEL SELLEM)
Advertisement
Every Hanukka some 250 librarians and 50 authors convene in the offices of well-established Hebrew publisher Danny Books in Kiryat Gat for a joint event. While they all share a common passion, many of the librarians have made their present career decision fairly late in life.“I was born with the name Galila Sfarim [books in Hebrew], but it took a while for me to get the hint,” laughs Galila Sfarim, a Jerusalemite psychologist who turned librarian. At the age of 50, with three children, she managed to finish her BA and MA in psychology at the Hebrew University of Jerusalem plus three other master’s degrees: in learning difficulties at Northwestern University, developmental psychology at the Hebrew University, and information science at the David Yellin College of Education. Today, she works at the Hebrew University’s central library on Mt. Scopus.

“Many people were surprised by my choice, but there were a few people who said it would suit me, and that their fantasy was also to become librarians.” When hearing what I do for a living, some press their finger to their mouth, whispering ‘shhhhhh’, but in the four years I’ve been working in the library I’ve never once told anyone to be quiet. I also heard someone react saying that librarians are sexy.”Asked whether her experiences from her previous vocation as psychologist assists her today, she says that “as a psychologist, my job was to deal with the difficult and painful sides of life, and I felt it was difficult for me as well.” She added that she works with people and enjoys helping them now, too, “but this time with their healthier and active sides and their will to learn.”She adds that this new job “satisfies my fantasy of being an eternal student. The technical side, which is very central to the librarians’ work, is challenging. You have to keep up to date constantly with global developments in the world of information and computers. For me this is very natural.“The librarian’s job,” she explains, “is to mediate between the people and the information, which can be complicated and overflowing. Often I try to lower people’s anxiety when they begin looking for material, and in this respect it resembles the work of a psychologist… I find that the most important thing in a librarian’s work is to give good service. Even today, when many of the materials that the library offers are digital, there is a need of a library as a physical place.”NAAMA MAI, 49, of Tzur Hadassah, married and a mother of three, served for 14 years in the Israel Police as a researcher. She left due to arthritis, but after a healing period she turned to the library business.“I love books,” she says. “I remember myself returning from school, reading the new adventure book I just got from the librarian on the way as I walked, not able to wait until I get home.” 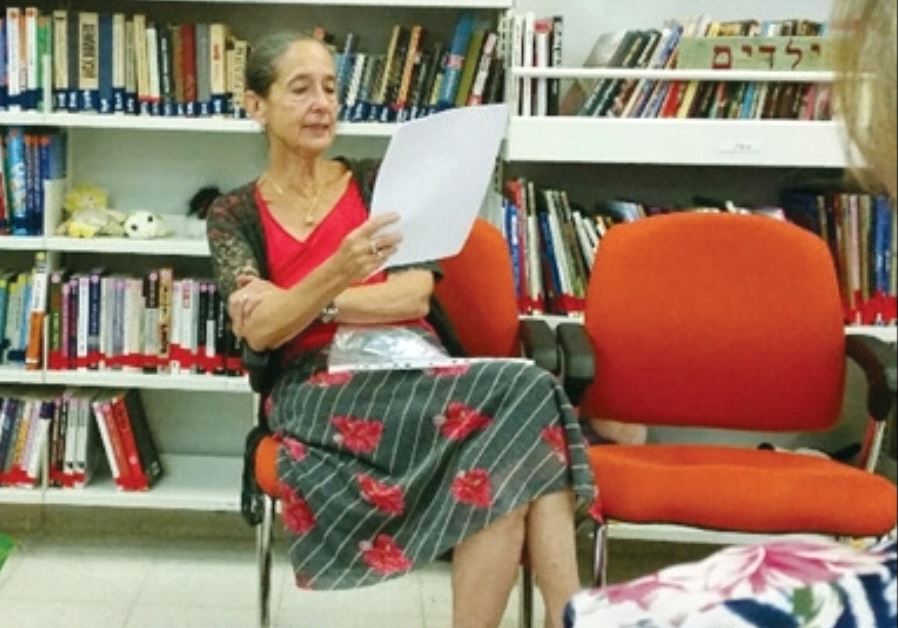 Naama Mai (credit: courtesy)
She adds that the profession suffers from a bad image. “Many people were surprised by my change, moving to a profession that is regarded as dull and that many think is a thing of the past. In general, the more I get to know librarians, the more I understood how underestimated their job is.”As part of the final paper for her master’s degree, Mai combined her knowledge from the police and her new field. Over a period of a year she researched libraries in four security prisons in the country: Nafha, Ramon, Ketziot and Hadarim.At the end of her studies she worked at the National Library for a year as a consultant and then decided to follow an old dream: working with youth at risk.“I approached a family relative who worked at the Mesila care center for girls in distress. I told him I’m interested in volunteering with the girls, teaching them research work. I imagined myself sitting with them in the center’s library… As we were talking, I asked him whether they had a library at all. He said they didn’t. There was silence. That moment we both knew that we were going to build a library.”And that’s what they did. The center supplied a room and shelves, and family members and friends volunteered to collect books. Some 3,500 books were collected in just four months. The scouts movement at Tzur Hadassah also helped collect more than a thousand books.“For two and half years I managed a professional library for the girls at the center, together with other librarians who volunteered, and used to come with cookies, magazines and dolls, and be a regular presence there. We had lectures, including one by Sara Angel [former wife of a mobster and a former prisoner turned writer], whose books were the most frequently stolen from the library.”According to Mai, this was a very significant development for the girls there. “When I first started this project, many laughed, but the girls proved them wrong… They were begging for books on topics that have to do with different kinds of problems, such as drug abuse, rape, orphans, incest and anything that had to do with their life stories.”Today Mai is working on broadening her activity in the field and opening a public library focused on at-risk youth in Jerusalem, which would be managed by police pensioners. The library would become a meeting space between at-risk youth and former police officers, who could share from their experience. The library would also offer language studies in Hebrew, Arabic and Amharic, and would assist in the kids’ rehabilitation.Bringing the book back to life The world of dance and movement has always been a part of Dalit Yissaschar’s life. She is a dancer, dance and movement teacher and a therapist. Yissaschar, a graduate of the Music and Dance Academy in Jerusalem and the theater studies department at the Hebrew University, is the founder and manager of Bi’tnua (In Movement) – a center for dance, movement and yoga in the capital’s Beit Hakerem neighborhood.She is also the developer of dance-teaching methods for children and infants. In recent years, she has been working at the youth section of the Illustrations Library at the Israel Museum. 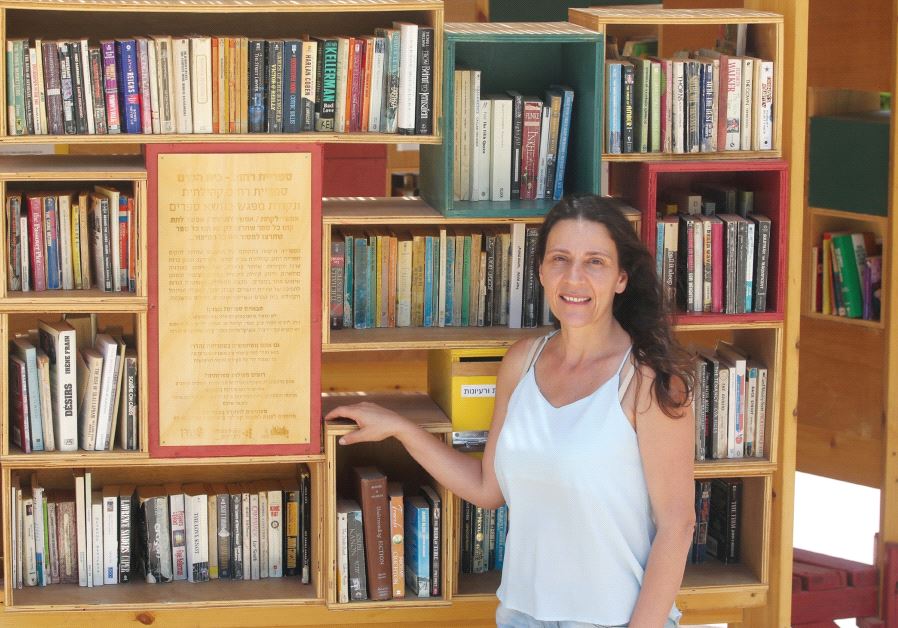 Dalit Yissaschar (credit: Marc Israel Sellem)
She says it is her work at the library that pushed her to make the decision to go and do her master’s in information science. “I always loved to read, and in the 21st century there is still room for books. The book is a means to understanding the soul, to painting the thought and fulfilling wishes and fantasies.“Information science studies today are combined with computers,” she adds. “The digitization field is very developed.” She reveals that her goal is “to combine the library and dance, and work in a library that specializes in dance. I had a feeling I would be able to find my place in the field.”As her final project at the university, Yissaschar decided to establish a street library in Beit Hakerem. “The idea behind the library is the appearance of books in the public space,” she explains. It was also about “the labeling of reading as an attractive leisure activity and as a social activity, as well as creating social connections around books.”The library is in fact built on exchange. Residents take books and brings books of their own. It is a free library. The residents are in charge of the place and a team of volunteers puts the books in order and helps to clean around. It is lively and almost at any time people of all ages can be found there, leafing through books and contributing books of their own.” There are also many activities that take place there, such as community activities, lectures and more.ALHAM HALON Hana, 64, is the mother of four and grandmother of eight from Kafr Rama. She is the chairwoman of the Association for the Advancement of Libraries in the Arab sector and a member of the Association of Librarians and Information Scientists in Israel. She began working in a public library when she was 39. Until then she was engaged in raising her children.“I read a lot under my mom and older sister’s influence. I didn’t get to read children’s literature and I started reading novels since I was in the fifth grade.
Alham Halon (credit: Marc Israel Sellem)
“I became a librarian to contribute to society, because reading is not regarded as an important subject in the Arab sector. I studied Hebrew and general literature, too; something that helped me settle in my job as a librarian at the Western Galilee College.During my studies I was exposed to a 30-year gap between the situation in the Jewish and Arab sector. I decided to lead a change and to start working together with my colleagues for the establishment of an association for the advancement of libraries in the Arab sector.“In the last couple of decades, many from the Arab sector have studied library studies, and there are many children’s books [in Arabic] that were published.It is a mission. All the polls show that we are a people that doesn’t read. We are not ‘eulogizing the book,’ because it didn’t have an important role in our lives before, only among our educated, who still read,” she explains.“We are trying to revive the book. Perhaps in the future we will become a people that reads and be able to place the book at the center of our children’s lives.” Originally published in Ma’ariv.