Judaism’s many colors, many layers

Eliahou Eric Bokobza's vivid and vibrantly colored paintings are not only deceptive and disarming but unlike much of what is taken for “serious” art on the contemporary Israeli art scene. 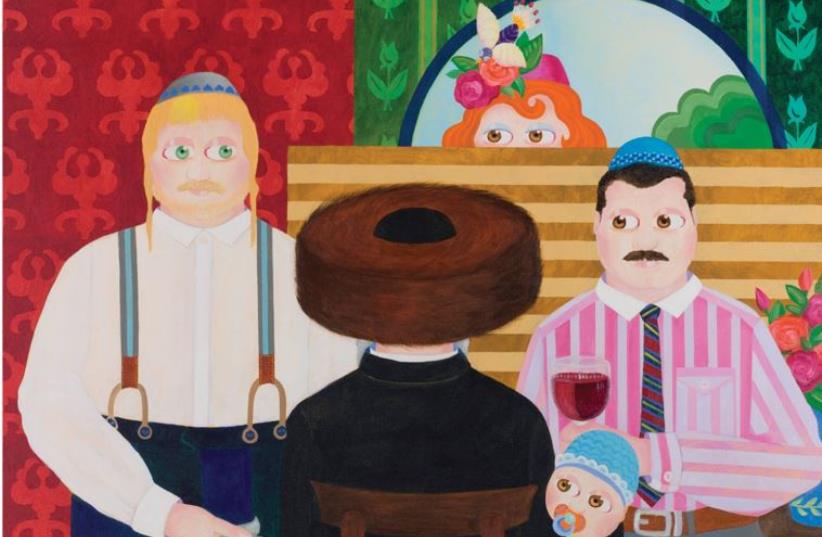 Eliahou Eric Bokobza’s latest exhibition at Beit Hatfutsot – The Museum of the Jewish People
(photo credit: RON ARDEH)
Advertisement
Hassidic rabbis, a voluptuous belly dancer, a bar mitzva boy, and a pink flamingo – these are just some of the characters and figures that inhabit the exotic world of Eliahou Eric Bokobza’s latest exhibition at Beit Hatfutsot – The Museum of the Jewish People.The vivid and vibrantly colored paintings, all executed in the style of naïve art, are not only deceptive and disarming but unlike much of what is taken for “serious” art on the contemporary Israeli art scene.Bokobza, however, has gained both critical approval and recognition for his works, some of which now sit in the Israel Museum, the Knesset and private collections at home and abroad.Bokobza was born in Paris in 1963. His father studied law at the Sorbonne and his mother was an opera singer; both were Tunisian. The family immigrated to Israel in 1969.As a child Bokobza received a good education, learned piano for 14 years and later studied pharmacology in Jerusalem.“I was not your typical Mizrahi immigrant. In many ways I was quite privileged,” he said, in conversation with Metro.Bokobza’s entrance into the art world was not immediate. His parents set him up with a pharmacy business and he also dabbled in window design. In the 1990s he divided his time between running his pharmacy and studying at the Kalisher Art Academy in Tel Aviv.
‘Bar Mitzva.’ by Eliahou Eric Bokobza (photo credit: RON ARDEH)
Since making the decision to sell the pharmacy and devote himself to art full-time, he has received awards and had many solo exhibitions.Bokobza’s work differs from that of naïve artists by his focus and choice of themes and concepts. Naïve art is marked by a simplicity of approach, both technically and with regard to subject matter.From the beginning Bokobza’s work has concentrated on Israeli and Jewish identity, dealing with issues such as Zionism, the political and military landscape, gender and religion.“I consider myself a conceptual artist. There are elements of play and thought in what I do. Many people believe that if you do naïve art, you have to be a simple or innocent person. There is a stigma about it, that it should be cheerful and happy,” he explained.At first glance Bokobza’s paintings might appear innocent, but the colorful veneer belies a world dense with imagery and allusion, much of which refers to Israeli society and culture.The latest exhibition is titled “United Colors of Judaica” and is connected to Jewish ritual and practice. The title is a play on words, alluding to the vision of the United Nations, but also an ironic reference to the Benetton fashion brand.The exhibition incorporates a series of paintings themed around Jewish holidays, the life cycle of a Jewish male, an imagined family tree and an installation.Interspersed are corresponding Judaica.“I became very interested in the world of Jewish artifacts and sought out objects I was drawn to,” said Bokobza.“One of the focal points of the museum is genealogy and the notion that as Jews we are one big family. I used this idea as a starting point, but have a different vision of what family is,” he continued.Bokobza’s notion of family is partly explored in what the curator of the exhibition, Dr. Smadar Sheffi, considers the “very core of the exhibition” – the recreation of a Shabbat/Passover table – in an installation titled “Famiglia.”It’s a notion closely bound up with his identity as a Mizrahi Jew.Placed around the table are several chairs in British colonial style that belonged to the artist’s maternal grandmother. The porcelain plates, which belonged to Bokobza’s paternal grandmother, are adorned with paintings of the figures seen in the family tree, each denoting their place at table.Both table and chairs sit atop a lino-carpet, designed in the tradition of oriental carpets but also showing Jewish symbols.The characters of Bokobza’s fictive family are gleaned from various sources, are of high and low birth, Ashkenazi and Sephardi, and from high and low culture. The chairs and plates are nostalgic reminders of life in Tunisia and of former French colonial rule. The installation fuses influences of East and West and, writes Sheffi, “distills various components of identity and national and personal layers of meaning.”Bokobza’s exploration of identity, both public and private, continues in the paintings. From his first solo exhibition in 2000, titled “Plaisir Oriental,” and through successive exhibits, Bokobza has engaged in a kind of dialogue with the style of the Bezalel school from the first part of the 20th century.Japanese aesthetics, as well as Oriental patterns and motifs, present in the work of the early Bezalelians, also informs and provides a kind of backdrop to many of his paintings.“I came from a design-based background.I never wanted to choose between clean, minimal lines and the color and opulence of the Orient. I’ve always tried to integrate styles and make them work together, to bring a wider approach to what I am doing,” he said.The series of paintings, the installation and the Judaica all relate to one another and can be interpreted as a kind of staged production – Bokobza’s very own Israeli drama – in which Eliahou (the Prophet Elijah), his alter ago and a figure present in much of his work, is the main character. 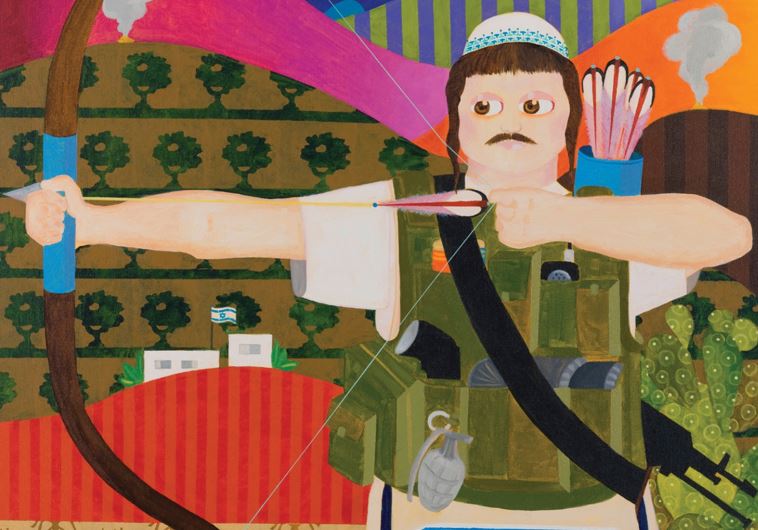 ‘Lag B'omer’ by Eliahou Eric Bokobza (photo credit: RON ARDEH)
Eliahou appears as a sabra in the painting Tu Bishvat, disguised as a soldier in Purim, and as a somewhat forlorn patriot in Independence Day.Throughout the paintings neither Eliahou nor the other figures appear at ease; rather, they appear alienated.Their eyes are always averted, their expressions devoid of emotion, even in moments of celebration, such as on the religious or public holidays.The characters and scenes in the works have elements of the familiar and the bizarre, and form something of a critique of Israeli society.A figure resembling the “hilltop youth” with what appear to be settler outposts in the background is seen in the painting Lag Ba’omer. In the catalogue text Sheffi writes that “Zionism identified the holiday with the revolt led by Rabbi Shimon bar Yohai... which led to the destruction of Judea.”
Is Bokobza implying the violence of extremist settler youth might visit a similar fate on the land? The painting does not have the visual weight to carry such an ominous message, but it does have resonance in light of recent events.The striking diptych Wedding might be the exhibition highlight, a work suffused with biblical and art historical references and the abundant colors of Bokobza’s art.The composition portrays a hassidic couple, the biblical figures of Adam and Eve and an array of animals in a lavish mix that leave us pondering as to which couple will marry. Will it be a heterosexual or same-sex marriage? Bokobza leaves us guessing, but in drawing a link between early and modern man (and woman) alludes to the complex relations in present-day life.
‘Wedding’ diptych' by Eliahou Eric Bokobza (photo credit: RON ARDEH)
The United Colors of Judaica is a multilayered exhibition in which Bokobza continues to explore and integrate elements of Israeli and Jewish identity, interweaving and overlapping themes in a very distinct fashion.The affect is somewhat akin to walking into a Middle Eastern bazaar, with its joyous range of color, character and spectacle. Thing is, you never know quite what you’ll walk out with.The exhibit runs until January 28, 2016.For more information: www.bh.org.il
Advertisement
Subscribe for our daily newsletter