God help us all. 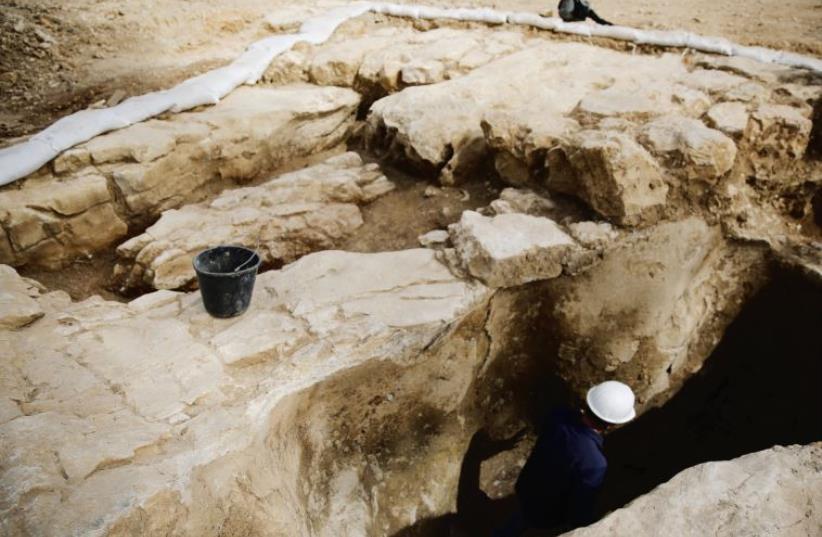 An Antiquities Authority employee works inside a ritual bath, part of a find exposed in Jerusalem this past March
(photo credit: REUTERS)
Advertisement
Ritual baths are very much in the news today, with the controversy over whether Reform and Conservative congregations can use state mikvaot for performing conversion ceremonies. I wonder how you ladies feel about this issue.– All at sea

Tzippi Sha-ked: The mikve conversion issue lands everyone in hot water. Accepted religious wisdom invokes standards to uphold and eschews the thought of just “anyone” dunking in holy waters.If higher institutions of learning can dictate acceptance criteria, the thinking goes, why should religious standards be different? Shouldn’t a Jewish state practice religion according to Halacha? Who should be the de facto gatekeepers of ritual waters? Balaniyot (mikve attendants)? Rabbis? The government? Who should decide which convert is “kosher,” and which is not? What if an atheist wants to ritually immerse in a ritual bath, or a prostitute, a transgender? Would the self-appointed guardian of the baths allow a Woman of the Wall to take a dip? These questions drown in murky waters. My inclination is towards the golden mean. As long as mikvaot are state-funded, religious sectarian interests should not rule the day, notwithstanding religious standards that must be upheld.Religious leaders, guided by halachic and not political concerns, should set guidelines – but not on the government’s shekel. Perhaps within their own communities, mikve use could be limited to women who conform to their standards.I cringe at the thought of mikve-goers being scrutinized for suitability while they are wrapped in a towel. The opposite, we should encourage and celebrate their arrival! Religious intent and halachic fulfillment are private concerns between individuals and God. Judaism’s foundations won’t crumble when proselytes immerse in a mikve; Jewish enthusiasm for mikvaot may erode with the passage of this Knesset bill.Public mikvaot should adopt a DDA approach: Dunk, Don’t Ask.Pam Peled: I have done the ritual immersion routine only once in my life: the night before my wedding. I was happy to go – religious friends assured me that God listens intently to prayers intoned in the mikve’s sacred space; my beloved, young, one-of-the-goodguys dad was dying, and I was relieved to have the chance to ask the Blessed Be He to change His plan. Primed by my friends I also prayed for dear life, literally, under my huppa, begging the Lord to listen to me.My darling father died an agonizing death shortly afterwards; somewhere, my communication with my Maker broke down.We have another mikve experience in my family: when my brother’s wifeto- be was converting some decades ago, he handed $3,000 in a brown paper envelope to the Sephardi chief rabbi of Ashdod, who dunked my sister- in-law in the mikve (after he had counted the cash) and pronounced her Jewish on the spot – and Orthodox.At the risk of sounding repetitive, I say again: It’s us, we are to blame. We outnumber the zealots controlling our life-cycle events. We know it’s all about the money, we hate that they are hijacking our traditions and turning us against our own religion. Why do we put up with it, election after election after election? Our High Court gets it: it recently ruled it illegal to ban tax-paying Reform and Conservative members from using state-funded, state-run mikvaot.Now the religious holier-than-holies in our government are working to bypass that law.God help us all.

Danit Shemesh: The mikve is not a feel-good sociopolitical tool for the politically correct.It is the agent of metamorphoses from one spiritual station to the next; a rite-of-passage, purifying, priming a woman for her husband. Rabbi Aryeh Levine likens it to a womb: full of nourishing waters readying for birth, or rebirth, in the case of a mikve. New potential emerges from the waters.This transformation obligates diligent preparation. With correct preparations the mikve is used properly, and the metamorphoses is mobilized.However, if the preparations are not in accordance with the law, the system of purity is misused and abused. The worry is not about soiling the mikve; there are many rules that keep it kosher.However, misusing the mikve impedes its transformative powers; a body simply immerses in waters with no significance, like taking a bath.Our learned rabbis prepare converts to become Jewish. We are not the legislative branch; we are the implementation authority. We do not reject anyone; we simply ask that the letter of the law be upheld in preparing for true conversion.Yes, Pam, it’s tragic that even haredi rabbis allow their thirst for money to taint the public’s perception of such a beautiful concept. But a few corrupt rabbis do not detract from the importance of conversions adhering to Divine (as opposed to social) law so that we can rest assured that the person immersing in the waters has been well prepared and knows what it means to be transformed.