Perhaps Schissel summed it up best: “I think it’s impossible to understand the reality we face today, without knowing the history of Hebron.” 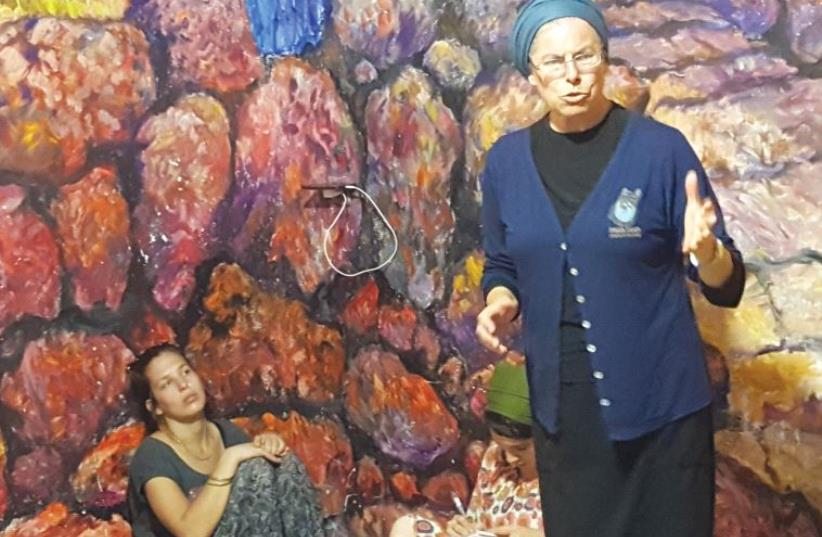 Tzipi Schissel, curator of the Hebron History museum, leads a tour of the site and discusses her personal connection to the massacre
(photo credit: BEN BRESKY)
Advertisement
Before the mid-1980s, if a crowd gathered at the site of the Avraham Avinu synagogue in Hebron, they would have found crumbling walls and a sheep pen. The synagogue, built in 1540 by returning Sephardi Jewish exiles from the Spanish Inquisition, was abandoned after the infamous 1929 massacre.But last week Hebron was filled with people snapping photos of the original Torah scrolls, which date back hundreds of years. Now reconstructed, the house of worship has daily services, using the same Torah scrolls used by the community that once lived there.

Dr. Yinon Elmakias, who lectured about the Torah scrolls, was one of the academics who led the seminar marking the 87th anniversary of the 1929 massacre that took 67 lives and resulted in the expulsion of the Jewish community. Young and old walked through the now inhabited Jewish quarter in the city that suffered from the worst of the disturbances that year.The conference took place on August 10, and began at Midreshet Hevron, a college in Kiryat Arba. Prof. Gershon Bar Kochba, a Hebron resident, spoke about what was called the Jewish ghetto of Hebron, the only place in Israel referred to by that name. With copious notes and photos of the neighborhood – including maps and diagrams of what 1920s Hebron Jewish life was like – Bar Kochba described a traditional, tight-knit, humble community on a lower economic stratum.The next speaker was Dr. Yuval Arnon-Ohana of Ariel University. In contrast to the previous speaker, he was clean-shaven, bare-headed and spoke almost without any notes. He fascinated the crowd by his lecture on Arab riots, which were instigated by Haj Amin Husseini, the mufti of Jerusalem.Arnon-Ohana explained that Husseini’s excuse for the riots was the increase in Jewish immigration. He countered, however, that in the late 1920s, Jewish immigration was at one of its lowest points. He argued that the real reason was a bid for power by Husseini, who sought to consolidate Arab factions by whipping them into a frenzy over a common enemy.Husseini later became a supporter of Hitler, as evidenced by the famous photo of the two sitting together in Germany.The cause and details surrounding the riots have filled volumes. Why did neighbors slaughter neighbors? Although tensions existed in the city between Jews and Arabs over generations, daily interaction was a fact of life. For example, the chief rabbi of Hebron, Rabbi Eliyahu Mani (c.1818-1899), mentioned frequently in the lectures, was revered by Jews and Arabs alike as a spiritual leader. The Chabad matriarch Menucha Rochel Slonim (1798–1888) was also respected, and offered advice to both communities despite her seemingly outsider status as an immigrant from Russia. 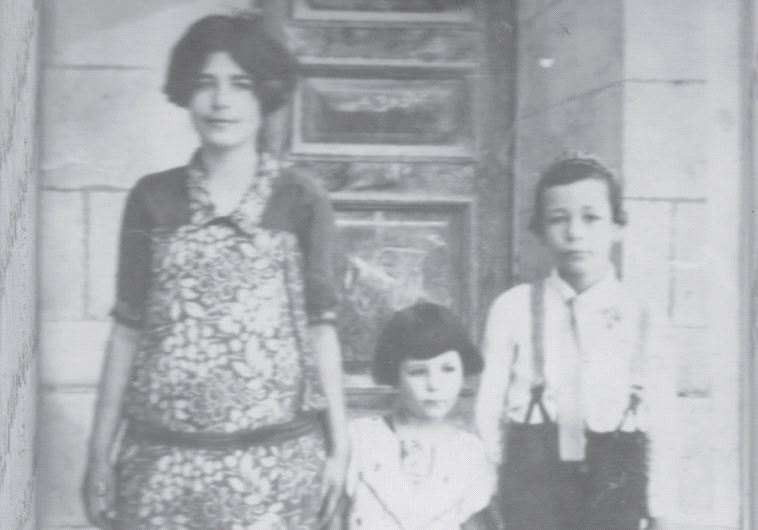 Sarah Tzipporah Segal (left) (Ben Bresky)
In the riots of 1921, also instigated by Haj Amin Husseini, Hebron was calm. This led to a lax attitude seven years later. But on that fateful Shabbat on August 24, 1929, mobs of Arabs broke into Jewish homes, torturing, raping and murdering 67 people. Their bodies were mutilated and their homes looted. Although many claimed they were only seeking revenge on “The Zionists” or “the strangers,” both Ashkenazi and Sephardi Jews were murdered. Young and old, long-time residents and new immigrants were targeted. The remaining community was rounded up by the British Mandate authorities and sent off to Jerusalem. The memorial to the victims was later vandalized, and the cemetery plowed over.One of the most violent and dramatic episodes of the riots involved that of Eliezer Dan Slonim, from the famous Chabad family that helped revitalize the backwater community when they immigrated en-masse in the mid-1800s. Slonim spoke fluent Arabic, and was the only Jewish member of the Hebron city council.He was manager of the Anglo-Palestine Bank, and well-known by both Jews and Arabs. It was for this reason that Jewish community members sought refuge in his home.The Jewish Telegraphic Agency reported on October 9, 1929, in an article titled “Hebron, Five Weeks After the Massacre,” that “it could not help hearing reports of the mob’s demand that Slonim should surrender the ‘foreigners,’ meaning the yeshiva students sheltered in his house, if his and his family’s lives were to be spared, and the martyr’s historic answer, ‘We Jews are one.’” Slonim and his family, including his wife and young children, were killed. One child, one-year-old Shlomo Slonim, survived. He was found with a knife wound in his forehead in his dead mother’s arms.Shlomo Slonim, who died in 2014, used to attend the memorial in Hebron every year. This year, the few remaining survivors are all in the 90s.In April of this year, one of the more vocal survivors, Miriam Sasson, died at the age of 92. She was part of the Castel family, whose roots in Hebron go back to the time of the Spanish Inquisition. Her family was in the group that returned to the city from 1931 to 1935, before the British again deported the Jewish residents amid countrywide rioting in 1936.It was an Arab neighbor who saved Miriam and her family from the massacre by hiding her in his butcher shop. However another member of the Castel family, 60-year-old Rabbi Shlomo Castel, was burned to death by the mob.The irony of some Arabs risking their lives to save their neighbors while others brutalized the defenseless has been debated for decades.One lecturer at the conference had a more personal connection to the story. Tzipi Schissel, curator of the Hebron History museum, led a tour of the site located in the historic Beit Hadassah. The building, originally built in 1893, served as one of the first Hadassah hospital branches and treated residents of all backgrounds.In 1929 it was the site of violence, and was subsequently ransacked.The participants of the conference viewed the new 4D movie titled Touching Eternity, about the history of Hebron. As dramatic as the film was Schissel’s description of what her grandmother went through in those dark days. Standing in a hall dedicated in memory of the victims, she told the group about Sarah Tzipporah Segal, whom her family affectionately called “Tzippora’le.”“She was approximately 14 years old during the pogrom,” Schissel stated. She and her sisters survived with the help of an old man named Abu Shaker Amru, who refused to allow the rioters to enter his house. But the rioters were so cruel that they attacked him and chopped his leg off.” Abu Shaker is mentioned in detail for his heroism, in the book Year Zero of the Arab-Israeli Conflict 1929, by Hillel Cohen. 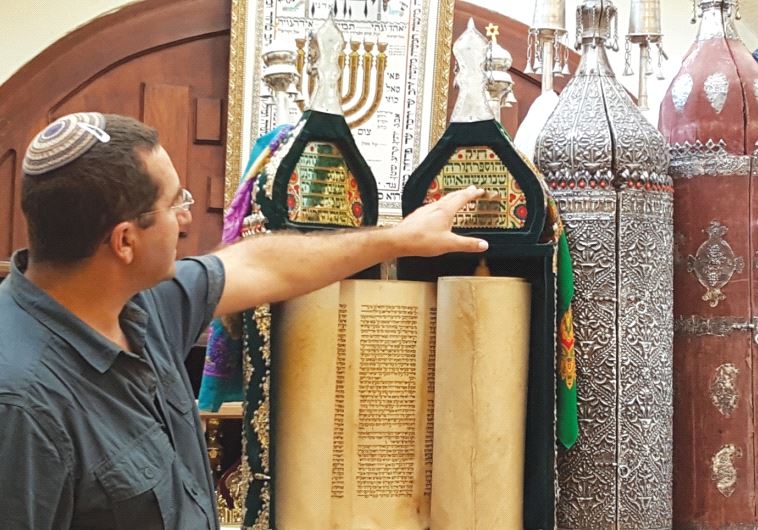 Dr. Yinon Elmakias lectures about the Torah scrolls in Hebron’s Avraham Avinu synagogue, some of them dating back almost 500 years (Ben Bresky)
In her role at the museum, Schissel meets a wide range of people including family members of the old community, something she says brings her inspiration.“A soldier stationed in Hebron brought his 99-year-old grandfather, who recognized his own father in an old photo of the Avraham Avinu Synagogue,” she related.Today, with only a handful of survivors, efforts are being made to preserve the memories. The Jewish Community of Hebron has posted interviews of many survivors on YouTube, which feel almost like many of the Holocaust testimonies prepared by Yad Vashem.Both have mentions of ghettos, pogroms and lost communities.Old newspaper articles are now accessible on website such as the Jewish Telegraphic Agency. One, dated September 27, 1929, describes the trial of the few rioters who were brought to justice: “The simple-worded testimony of thirteen-year-old Judith Reizman, of how she saw her father, mother and uncle pursued by a mob of howling... brandishing knives and daggers, later finding the bodies in the gutters, produced a dramatic atmosphere in the Hebron court.“When the Reizman girl had told her story in the breathless silence of the courtroom, the judge asked her if she could identify anyone... she calmly walked up to Ibrahim Abd El Assiz, a young Hebron merchant, her father’s next door neighbor, saying, ‘Yes, Ibrahim was nearest my father with a knife uplifted when the mob overtook my father.’ Then addressing the Arab, who hung his head in shame, the girl asked him in the kindest voice imaginable, ‘Ibrahim, how could you?’” The article later described Hebron as “commercially a dead city. Merchants’ stalls are heaped high with unsold fruit and vegetables...”In a follow-up on December 18, 1932, an article titled “Decline of Hebron Since Massacres of 1929” noted “nearly 50 percent of Hebron’s dwellings are untenanted.” 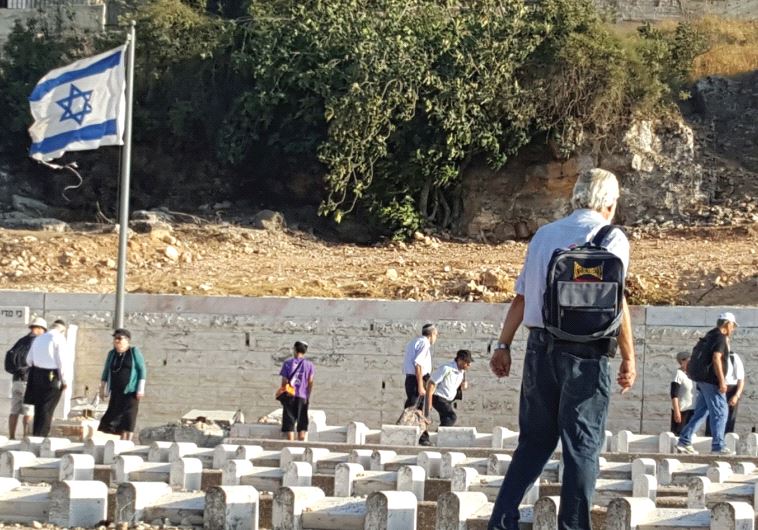 Reciting the Kaddish prayer at the city’s ancient Jewish cemetery (Ben Bresky)
Another article dated October 4, 1929, quotes Rachel, seven-year-old daughter of Eliahu Pelazzi (also spelled Palachi): “I remember the day of the riots. We were all at home, I, father, mother, grandmother and some neighbors,” she stated at the trial. “Muslims suddenly began knocking at the doors, broke one down and beat at another with iron bars. The room suddenly was filled with Muslims, but I recognized only Ismael. He had a knife in his hand. With this he stabbed my father. I saw it. I know Ismael from before,” the child declared.A follow-up article dated April 24, 1930, stated the accused “was acquitted in the High Court, because the court was not satisfied with the witnesses offered by the prosecution.”A video testimony posted on YouTube shows Rachel, an older woman with gray hair, describing life in Hebron in the 1920s.Other articles that covered the trials describe Jewish witnesses identifying former Arab friends as those that participated in the massacre. Several of the victims were Americans, who had moved to Hebron to study in the prestigious Slobodka Yeshiva. The State Department listed eight Americans killed: William Zev (Wolf) Berman of Philadelphia; David Sheinberg of Memphis; Benjamin Hurvitz and Wolf Greenberg of Brooklyn; and Harry Frohman, Hyman Krasner, Aaron David Epstein and Jacob Wexler of Chicago.Most of those caught received only light sentences.After a dozen or so were sentence to death, the British government commuted the sentences. In the end, three rioters were executed by the British. A June 17, 1932, article stated that Arab leaders called to “remember the Arab ‘heroes’ who were executed... The Arab Executive announced a general strike on the day of the executions, and there were demonstrations by Arab school children.”The conference ended with a memorial service at the ancient Jewish cemetery in Hebron. The graves of such Torah luminaries as Rabbi Eliyahu de Vidas (Reshit Hochma) and Rabbi haim Hezekiah Medini (Sde Hemed) are located here, as is a memorial to the 1929 victims. Kaddish and the traditional El Malei Rahamim prayer were said, and as the sun set over the city and the large Israeli flags waved over the plots, the mourners stood in silence.Hebron seems to be a city of ironies. Today, almost 700,000 people visit every year, especially to see the monumental Cave of the Patriarchs, burial site of the biblical Matriarchs and Patriarchs. Yet the city is also known for violence and religious/ethnic tension.As the mourners faced the quiet cemetery in the old section of the city, behind them in the distance could be heard the honking cars and busy factories of the Palestinian Authority side of Hebron, the commercial center of the region.Perhaps Schissel summed it up best: “I think it’s impossible to understand the reality we face today, without knowing the history of Hebron.”