But most of all, Dauber dreams that women will realize surfing is for them too. 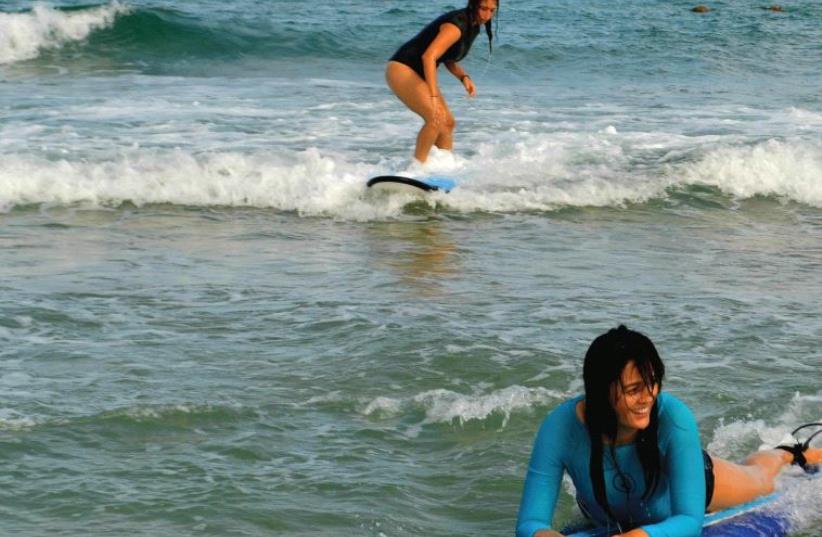 Maya Surf students practice catching a wave
(photo credit: INBAL AHARONI)
Advertisement
It’s 8:30 on a Friday morning in mid-June and things are quiet at Charles Clore Beach, but they’re starting to pick up. It is that hour when the early risers – the golden-agers walking along the shore, or taking a quick dip before they wade their way back ashore – are starting to be replaced by Tel Aviv’s morning sunbathers; a second wave of morning golden-agers – and the surfers... Oh the surfers.They sit on their boards, just a bit off shore, glistening in their wet suits, alphas of beach hierarchy, waiting to catch a wave.Little boys on the beaches clearly want to grow up to be surfers. Drive by any of the big municipal beaches during summer break, and there they are – schoolboys attending surf camps, outnumbering the girls. And check out any of the beaches and it is obvious: male surfers dominate, and they’re not necessarily accepting of a female in their midst.“Hey, you see that girl over there?” a burly man in a wet suit asks. He walks up, board under arm and points out a girl in red swim top. She’s in the water with a group of male surfers, holding onto her board. “Well, she says she can stand up. If you get a picture of that we want to see it, because we don’t believe her.” He walks off into the water, chuckling to himself.So what is the fairer sex to do? Where can a girl go to learn how to rip with the best of them – and from the best surfer ever to come out of Israel? Maya Surf, the first and only surf and stand-up paddleboard school for women in Israel, is located across the street from Charles Clore Beach, right where the road branches off into Jaffa, in the front section of a little artists’ complex. There you will find a surf shop, a team of instructors, and Maya Dauber, 45, founder and head instructor, Israeli surfing champion and Women’s Qualifying Series competitor who ranked No. 5 at 1997’s Roxy Pro Hawaii.“In the beginning, people said ‘What? Have you gone crazy? A school only for women? To teach surfing?’” The dark-haired Dauber laughs. She is sitting on a couch in the facility after lessons have let out, remembering. “It sounded unrealistic to them – odd.”People told her that women would not be interested, that she would never be able to make a living from it, Dauber says. 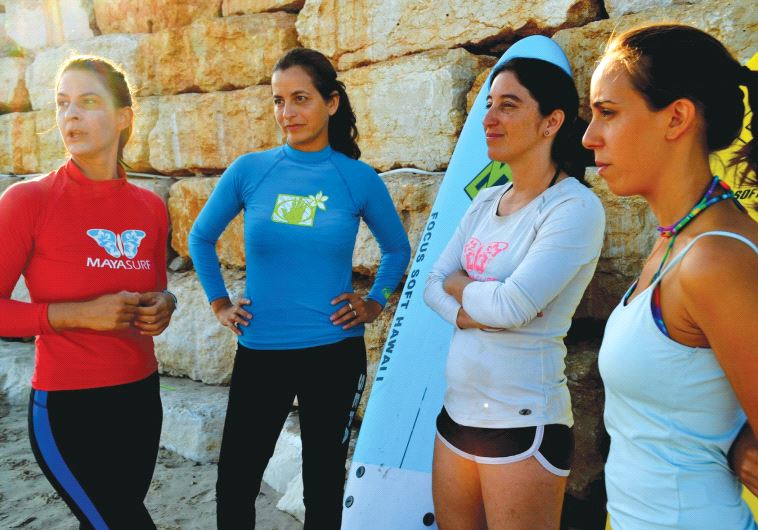 Instructor Sivan Amir (in red) briefs students on the day’s waves before they enter the water (Inbal Aharoni)Dauber and business partner Dalit Hakim, 43, decided to make a go of it. “I used to come here to the beach, to surf alone – and I thought to myself, ‘If I love it, and I’m 36, I’m sure that other women will love it as well.” Hakim speaks passionately about their shared dream of bringing surfing to women. “I had this idea...of making this sport as accessible as possible, and that as many women as possible would learn to surf.”And by the looks of it, Dauber and Hakim have been successful. Every so often during the interview, Hakim is interrupted by clients – women who have walked in, looking to extend lessons, or buy memberships.Things began in 2010, with Dauber teaching a small surf clinic to a handful of women, and grew. “We were surprised to find out there were women who wanted to come and learn to surf, especially at an older age,” Dauber says. “Many women who spoke to us said that as girls, it was their dream to surf, and they never made it happen for different reasons. They told us how they saw boys surfing, but didn’t have the courage to go into the water, to try, and to fail, and to experience all this around boys.”Today, Maya Surf’s offerings have evolved into a fullscale program, with a team of professional instructors, trained by Dauber, beginning and advanced level lessons in surfing and stand-up paddle-boarding, yearround memberships, boutique surf camps for boys and girls ages seven to 14, and a women’s-oriented surf shop.The instructional program, developed by Dauber, was created with women’s physical capabilities in mind.Beginning surfing lessons are broken into a five or 10-class offering, and are taught using a four-steps-to standing progression, instead of the usual “pop-up” technique, which women often find challenging due to a lack of upper-body strength. Lessons begin in waist-high water. Once a student has learned to ride in whitewater (the waves closest to shore), she is taught to paddle, and how to safely go out deeper.Stand-up paddle-boarding lessons are the other main offering. On any given morning or evening, if you head down to Charles Clore Beach, you are likely to run into groups of Maya Surf students – some in swimsuits, some in colorful vests, some warming up in circles, others heading out into the water, paddleboards under arm and paddles in hand.As with the surfing, stand-up paddle-board lessons are divided into beginner and advanced sessions. Says Dauber of the beginners, “These girls aren’t coming for a workout, they are coming to go out on the water and relax, and afterwards open a beer.” Advanced sessions are more demanding. “The difference is in the pace of rowing and in the condition of the water that we go out on,” she explains, “But everyone can find her place, and identify what she likes to do.” 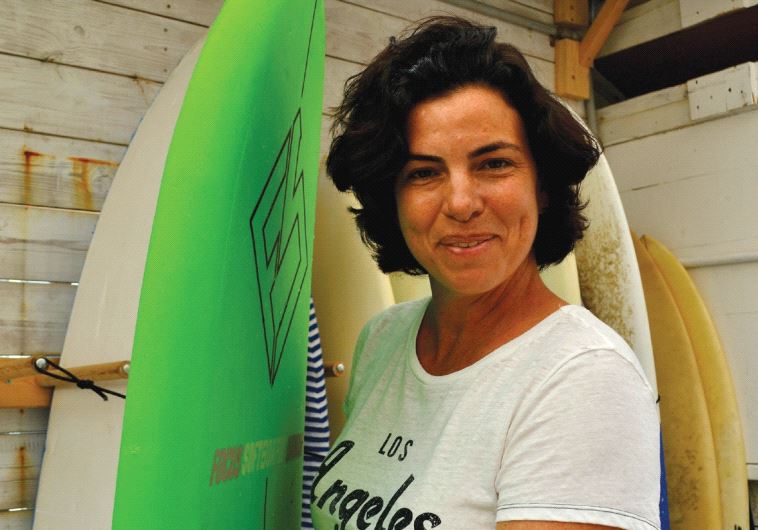 Maya Dauber, former Roxy pro surfer and co-founder of Maya Surf (Inbal Aharoni)Dauber says she still has lots of dreams. She dreams of continuing to provide children who attend her camps with the opportunity “to experience nature, to see that the city is more than just cement.” She dreams of starting a women’s competitive surf team. And she dreams of growing the acceptability of surfing as a sport for Arab women, so that instead of the occasional student from Jaffa, Arab girls learning to surf alongside Jewish girls will be a regular thing.But most of all, Dauber dreams that women will realize surfing is for them too. “Even if someone feels like she is not in shape, or feels like she is far from this, I want her to know – she can surf.” Dauber nods her head emphatically as she speaks. “It is not only a sport for the young, the tanned with sun-bleached hair. The ocean belongs to everyone, women and older women too, and they can surf – they can do it.”The school is located at 3 Nahum Goldmann Street in Jaffa. For information on lessons, camps and memberships: 052-341-9009 or www.mayasurf.com.