44 killed, in Egypt as Morsi supporters, opponents take to streets

By ARIEL BEN SOLOMON, REUTERS
OCTOBER 6, 2013 23:33
Tahrir Square on Yom Kippur anniversary 370
(photo credit: REUTERS/Mohamed Abd El Ghany)
Advertisement
Security forces clashed with followers of ousted president Mohamed Morsi in Egypt on Sunday, leaving 44 dead, as the country celebrated the 40th anniversary of the Yom Kippur War.Ninety-four people were wounded, state news agency MENA quoted the Health Ministry as saying.The Interior Ministry announced that at least 200 Morsi supporters were arrested while trying to enter urban squares.The Morsi camp had a strong turnout and violence and chaos ruled in various parts of Cairo, according to pictures and videos posted on Twitter.Morsi supporters were busy tweeting pictures and videos of those killed and wounded. 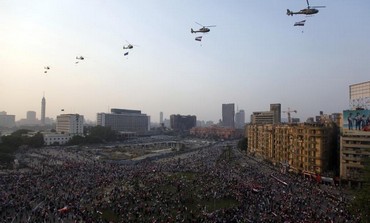 The events demonstrate that the Muslim Brotherhood and its adherents can still bring out large numbers of people despite the government crackdown and the arrest of much of the organization’s leadership.There seem to be so many Morsi backers it is extremely difficult for the army to calm the situation, especially if the Brotherhood and other Islamists refuse to cooperate.Fighting began after friends and foes of the deposed president took to the streets. Most of the dead had gunshot wounds, security sources said.A supporter of the Muslim Brotherhood was killed and at least two were wounded during a fight with police in a town south of Cairo on Sunday, security and medical sources said.They said Morsi supporters had been marching in Delga, about 300 km. south of the metropolis, and the battle erupted as protesters neared a police station.The Muslim Brotherhood protesters threw stones at police, who responded with live fire, the security and medical sources said. It was not immediately possible to verify what started the clash.Early on Sunday, fighter jets flew over Cairo to mark the war anniversary, as military supporters took to the streets and Tahrir Square, which was enclosed by metal detectors and heavy security.Meanwhile, Egypt’s national archive will release a 600-page book containing official documents relating to the 1973 war against Israel, covering the periods from June 5, 1967, when the Six Day War began, to the end of the Yom Kippur War.The documents will not contain any military papers but will include information on the preparation for the Egyptian attack 40 years ago. •