49 killed across Egypt on anniversary of anti-Mubarak revolt

While forces fire in air to scatter anti-government protesters, thousands of others chant support for army chief Sisi. 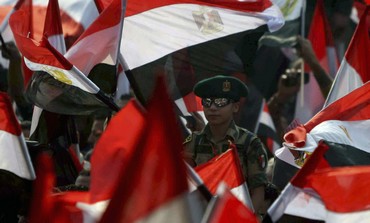 In different parts of the capital, armored personnel carriers were deployed to try and keep order, and anyone entering Tahrir had to pass through metal detectors.In the southern town of Minya, two people were killed in clashes between Morsi supporters and security forces, said Brigadier General Hisham Nasr, director of criminal investigations in the regional police department.A woman was killed in Egypt's second city of Alexandria during clashes between supporters of Morsi and security forces.The pressure prompted one alliance of liberals to call on their members to withdraw from the streets.But others gathered in central Cairo after nightfall to call for an end to the army-backed government. "Down with military rule," they chanted.Sisi toppled Morsi of the Muslim Brotherhood in July after mass protests against what critics called his mismanagement and increasingly arbitrary rule, triggering a confrontation with the veteran Islamist movement that has hit investment hard.

SISI TIPPED TO RUN FOR, WIN PRESIDENCYThe general, who served as head of military intelligence under Mubarak, is expected to announce his candidacy for the presidency soon and likely to win by a landslide in elections, expected within six months.Several leading politicians have indicated they would not run for president if Sisi does, highlighting his dominance and the barren political landscape that has emerged since Mubarak's fall. The most vocal critics of the new order - the Brotherhood - have been driven underground.The army congratulated Egyptians on the anniversary of the 2011 uprising and said it would help people build on the gains of what it calls the June 30 Revolution, a reference to the street unrest that prompted the army to oust Morsi.Such messages have wide appeal for people like Shadia Mohamed Ahmed, a veiled middle-aged woman holding a poster of Sisi in Tahrir. She said "criminals" who commit violent acts against Egypt should be "executed in a public square."The crowd around her called for the execution of Brotherhood members.Tensions have been smouldering anew since a wave of deadly bombings killed six people in Cairo on Friday. An al Qaida-inspired group, based in the lawless Sinai Peninsula, claimed responsibility, according to the SITE monitoring organization.In an audio message posted on militant websites, al Qaeda leader Ayman al-Zawahri called on Egyptian Muslims to focus on fighting what he called "an Americanized coup" staged by Sisi instead of battling the country's minority Christians.The leader of the Coptic Christian church backed Sisi's military takeover.Early on Saturday a bomb exploded near a Cairo police academy. No one was hurt, said the Interior Ministry.TEAR GAS AND BIRDSHOTSome didn't have the chance to express their views. Police fired live rounds in the air to disperse about 1,000 anti-government protesters in Cairo's Mohandiseen district and at two other marches in downtown.Hisham Sadiq, a university student, said he was protesting against "military rule and the thugs of the Interior Ministry".At one rally, the crowd yelled "the people want the downfall of the regime!" - a common chant during the 18-day revolt that ousted Mubarak - before running from tear gas.Dozens of anti-government protesters were arrested in Egypt's second city Alexandria, security sources said.When he removed Morsi, Sisi promised a political roadmap that would lead to free and fair elections.But the Muslim Brotherhood says Sisi and his allies in the government have blood on their hands and accuse them of undermining democratic gains made since Mubarak's downfall.Security forces have killed up to 1,000 Muslim Brotherhood supporters and put the movement's top leaders in jail. The Brotherhood, which renounced violence in the 1970s, has been declared a terrorist group.But the tough measures have failed to pacify Egypt, which is of great strategic importance because of its peace treaty with Israel and control over the Suez Canal.Sinai-based Islamist militants have stepped up attacks against security forces since Sisi toppled Morsi. Hundreds have been killed.The security crackdown has been extended to secular-minded liberals, including ones who played a key role in the 2011 uprising. Human rights groups have accused the Egyptian authorities of quashing dissent and using excessive force, calling state violence since Morsi's ouster unprecedented.Egypt's most prominent rights groups criticized the government for using the "purported aim of 'countering terrorism' as justification to commit arbitrary arrests and restrict freedoms."Although the Brotherhood has been nearly crushed by the state, the group has a history of rebounding."Their soft, non-ideological support from Egyptian society has collapsed but their most energized core remains more zealous than ever," said Michael Hanna of the Century Foundation in New York."The Brotherhood and its supporters are not something that can be swept aside easily they have a substantial and resilient core." Jpost.com Staff contributed to this report.
Advertisement
Subscribe for our daily newsletter